"Some people like to say I’m only a jiu-jitsu guy, but with three fights and two KOs, you better keep your eyes open." - Antonio Carlos Junior 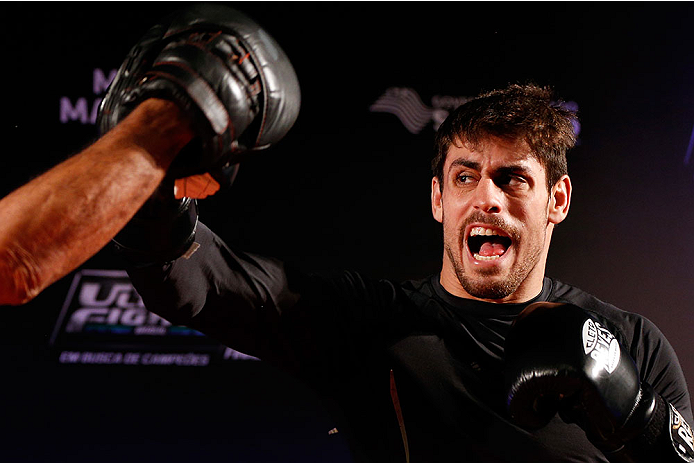 In the Brazilian Jiu-Jitsu world, the name Antonio Carlos Junior is a respected and feared one. In the world of mixed martial arts, it’s getting there, and if he can defeat Vitor Miranda and win The Ultimate Fighter Brazil 3, the heavyweight division may just have a new star in the 24-year-old from Joao Pessoa.

That’s a lot to deal with for anyone with just four pro fights, and “Cara de Sapato” isn’t downplaying it in the slightest.

“It’s a very important moment,” he said through translator Francisco Sigiliano. “I am very happy with this debut; it’s truly a dream coming true.”

Some would call it a nightmare, being thrust into a division packed with the likes of Velasquez, Werdum, Browne, Silva, Barnett, Miocic, Overeem, and Hunt. But you may notice one name missing from that list – Junior Dos Santos. Why? Well, simply put, one of his first training partners in jiu-jitsu was the former UFC heavyweight champion, showing that you can’t judge someone just by his results on fight night, but by the company he keeps as well.

And Carlos Junior keeps some pretty good company, not only working with Dos Santos’ longtime coach Luiz Dorea, but with Andre Pederneiras and the standouts from Nova Uniao. Those coaches’ advice to him about fighting and surviving in the UFC?

“Stay focused,” said the 24-year-old, who has been doing that throughout his competitive career. But it was needed the most during his six weeks on TUF Brazil 3, where he was forced to go through a tough tournament while living with the people he was going to fight. When it was over, he scored two knockouts and a submission to make it to Saturday’s final in Sao Paulo against Vitor Miranda, in the process making a statement about where his fight game is at.

“Some people like to say I’m only a jiu-jitsu guy, but with three fights and two KOs, you better keep your eyes open,” said Carlos Junior, who left the house with a good feeling about those he competed against and lived with, as well as some unfinished business.

“All the guys in the house are very important people,” he said. “They helped me and I’m very appreciative of knowing them. But my best part of TUF Brazil 3 has not happened yet. It will be winning.”

Carlos Junior is confident, that’s for sure, but he’s also respectful of the vastly more experienced Miranda, saying “He is a tough opponent with many strengths.” It’s this mix, along with an ever-evolving skill set that make him a dangerous foe for anyone, despite his relative inexperience. But don’t tell him about inexperience; he’s ready to get this fight on, win, and then join his buddy “Cigano” in the UFC.

“I will be completing a goal in order to start another more difficult one.”