"I’m not yet satisfied. There’s still that pesky word ‘interim’ in my title..." - Carlos Condit 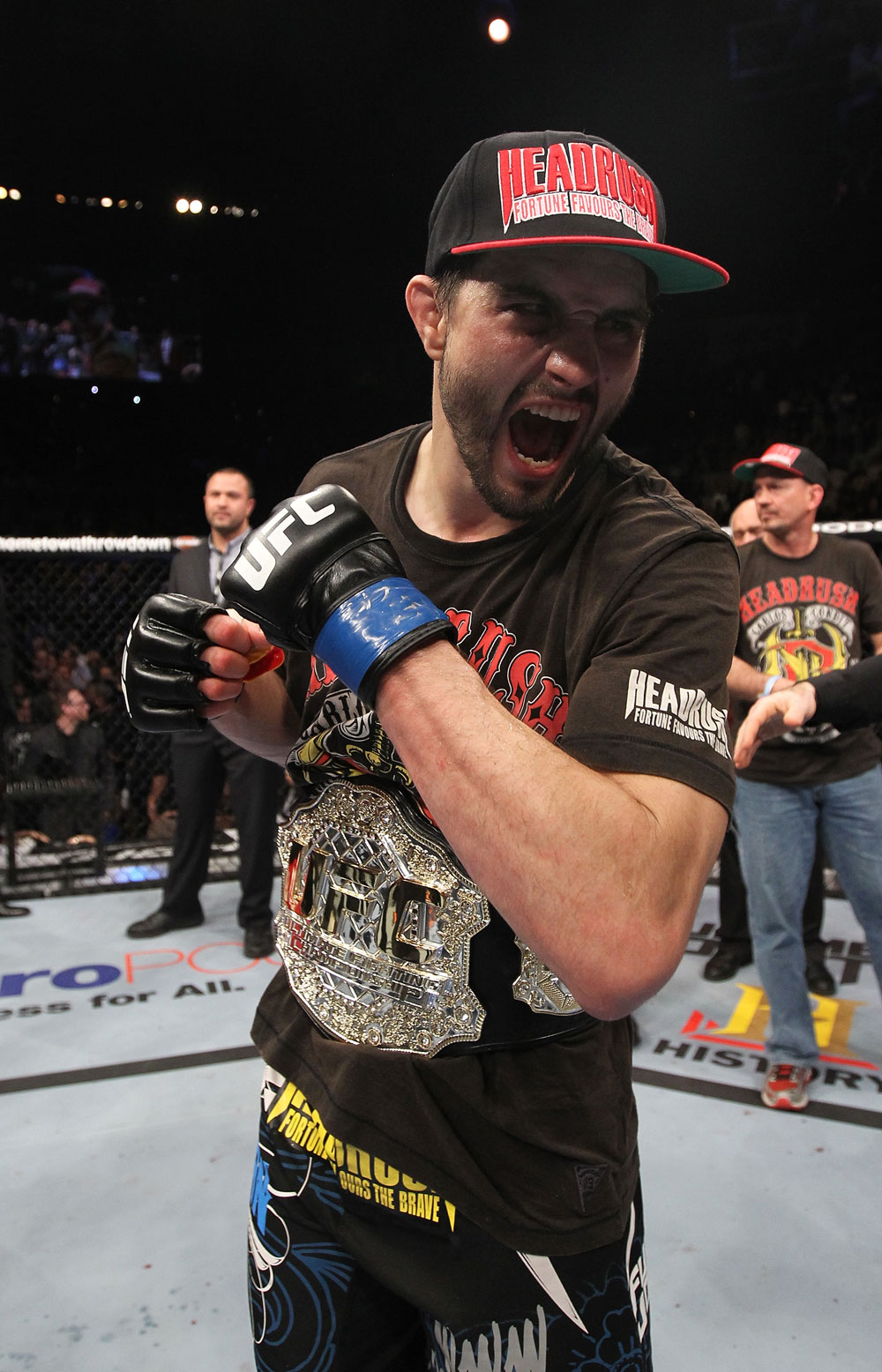 Despite the usual craziness that comes along with becoming a UFC champion, for Carlos Condit, the month after winning the interim UFC welterweight title at UFC 143 in February has been a lot less stressful than the one before it.

“Yeah, absolutely,” chuckles Condit, whose five round unanimous decision win over Nick Diaz earned him the interim belt as Georges St-Pierre recovers from knee surgery. Now he’s taking a well-deserved break. “Last year was pretty tumultuous, so I’m staying in shape, but I’m taking time to just enjoy being the champion, enjoy hanging out with my family, and for the most part, I’m just mentally relaxing so I can get back into a camp here in the next couple months and be able to completely dedicated and completely into it.

It was a crazy lead up to the Diaz bout for “The Natural Born Killer,” one filled not just with an intense training camp, but the added pressure of having cameras following his every move for the UFC Primetime show.

“The weeks leading up to a fight are super stressful anyway, and the cameras didn’t add a whole lot more stress, but any more stress on top of a highly-stressed situation kinda amplifies it,” explains Condit, who, while always accessible to the media, has never been one to chase after the spotlight. So letting the world into not only his life, but that of his family, was something new for him.

“It’s hard to put all that stuff out there,” he said. “I am kind of a private person, but that’s what people want to see and what some people connect with. I am just a regular guy. I get up and do the family thing and go and do my job like everybody else, but my job just happens to be training for cage fights.”

And then fighting in front of millions. Knowing all this, it made his performance against Diaz, who hadn’t lost in over four years, even more impressive. For five rounds, Condit followed his gameplan to a tee, sticking and moving and never allowing Diaz to get into a rhythm. When it was over, the judges rendered him the victor by scores of 49-46 (twice) and 48-47.

“I don’t think it was the war that everybody was expecting or even that me or Nick was expecting,” said Condit when asked his thoughts on the bout. “But it was an entertaining fight and I proved to myself that I can really stick to a gameplan and a strategy. In the past, I’ve gone in there with a strategy and once punches were thrown, I abandoned all that and kinda threw down. This fight showed me that I’ve matured as a fighter with experience.”

Coming off consecutive knockout wins over Rory MacDonald, Dan Hardy, and Dong Hyun-Kim, Condit was expected to stand and swing with Diaz until someone fell, but the Albuquerque native impressively turned the tables on his foe. And though it was a close, competitive, and compelling fight, some disagreed with the final verdict, causing an internet firestorm on the Sunday after the fight that surprised many, including Condit.

“Initially it did,” he said. “In the cage before they announced the decision, I felt that I had won maybe 4-1. I was positive that I had the decision and thought that I had won at least four of the rounds. Going back and watching it, some of the rounds were pretty close, but some people are completely baffled that anyone would see it for Diaz, and then some people are completely appalled and offended that I got the decision. But pretty much everybody that I’ve talked to enjoyed the fight and thought that I won, for the most part. I don’t know, it’s just one of those things.”

And though it was disappointing to see Condit be the focal point for these uncalled attacks on Twitter and other social networks, he takes it with a grain of salt.

“I understand it,” he said. “I think when you say MMA fans, you’re talking about a pretty broad spectrum. MMA appeals to a lot of different people, and different people want to see different things in a fight. It makes sense. There’s criticism of the way a person fought and then there’s going a little bit farther than that, and I think that’s uncalled for.”

What can’t be denied is that Condit fought an impressive fight over five fast-paced rounds against one of the best welterweights in the game. He had a solid gameplan, executed it perfectly, and got a well-deserved win. Was it the Armageddon in short pants fans screamed for? No. But this isn’t a toughman competition either, and Condit knew that standing in front of Diaz and fighting his fight wasn’t the wisest course of action.

“Not every single fight is gonna be like that,” said Condit. “I’ve had 30 fights in my career that were knock down, drag out fights, and if they weren’t, they were brutal knockouts. And the one time that it isn’t, people are a little upset.”

But that’s why they call this mixed martial arts, and Condit’s rise from WEC titleholder to UFC champion has been a prime example of a fighter’s evolution. It also showed off a fighter who has to be considered a serious threat to the man who is also at the top, St-Pierre. After an agreed-to rematch with Diaz was scrapped due to the Stockton native's NSAC suspension, Condit is looking forward to finally testing himself against Montreal’s finest.

“We had a pretty solid roadmap to what we thought would be a victory over Georges, and that’s something we had to put on the shelf because of his injury and because the fight got canceled,” said Condit, who saw a UFC 137 bout with the Canadian scrapped due to injury, as well as a early 2012 match due to a GSP-Diaz showdown that never happened, again due to a St-Pierre injury. “But it’s gonna be a very similar blueprint when we fight eventually.”

Hoping for a late 2012 return to face St-Pierre, who is reportedly ahead of schedule when it comes to rehabbing his knee, Condit will just enjoy his belt and his time with the family until that phone rings. And when it does, he will not go into training camp as a content champion. Instead, he will reprise his role as a hungry challenger.

“It’s bigger, but I’m not yet satisfied,” said Condit of life as a UFC champion. “There’s still that pesky word ‘interim’ in my title, and until I’m able to purge myself of that and be the undisputed champion, I’m still hungry.”