"The other guys he’s faced, they’re not me, and I think I’m gonna bring something different to the table.” - Carlos Condit 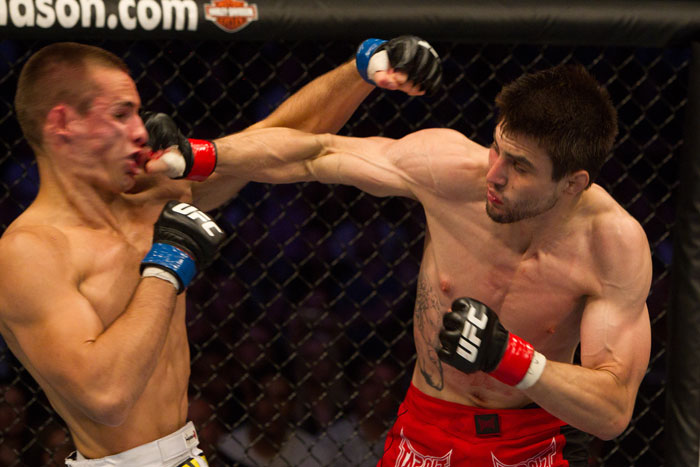 Nearly 24 hours after his world changed, everything finally started to set in for the new challenger for Georges St-Pierre’s UFC welterweight title, Carlos Condit.

“Little by little,” he chuckled as he wrapped up a day of media in Las Vegas to promote UFC 137’s new main event on October 29th. On Wednesday morning he was on the card, but in a bout against former two division UFC champion BJ Penn. But by the afternoon, everything got thrown into the blender.

“I had been pretty focused on training for my fight with BJ, and the first I heard of it (a possible change in the main event) I saw something on Twitter about him (Nick Diaz) not showing up to the press conference, and then 45 minutes later, I was slated to fight Georges.”

It was a surreal moment for all involved and even for those watching from the outside. Diaz was pulled from the GSP bout for missing both stops on the media tour and being unreachable by UFC management, and Condit got a call from UFC President Dana White asking him if he would like to fight for the title.

“I accepted immediately, and I got pretty choked up,” he said. “It’s been a long road, a lot of ups and downs, and to be at this point is amazing, and pretty emotional, to be honest.”

Getting that call out of the blue to replace an injured fighter in a championship bout is something many fighters visualize in their head during every training camp. It wasn’t in Condit’s repertoire though…well, at least until he finished up his UFC 132 win over Dong Hyun Kim.

“In the last couple of months it definitely went through my head,” he admitted. “After my last fight against Dong Hyun Kim, I told my manager that I was getting right back into the gym. Something might happen to Diaz, and that was even before I was scheduled to fight BJ. So I got right back into training with the thought that you never know what can happen. And it seemed to work out pretty well.”

It certainly did. And while some outside the fight game would look at a short notice fight against Georges St-Pierre as a punishment and not a reward, fighters like Condit crave such an opportunity, and as a former champion himself, the man who ran the WEC’s welterweight division knows a little something about preparing for title fights.

“It helps to have been there before, but Georges has fought a lot more championship rounds than I have, and even though I had a lot of five round fights, I finished most of them in the first or the second round,” said Condit, who won four title fights during his 2007-08 reign as the WEC’s last 170-pound champ. “Only one of those fights actually went into the championship rounds (a fourth round TKO of Hiromitsu Miura in 2008), so he has more experience in that aspect, and as far as the pressure goes with big fights, I’ve been there and I think that gives me the advantage over other contenders.”

He’s not just counting on his experience and a four fight win streak to carry him to victory this fall though, as he knows just how good the long-reigning king from Montreal is.

“Georges is an incredible fighter,” said Condit. “He’s been able to take down a lot of better wrestlers than me, so that’s definitely a problem. But I’ve gone a big part of my career fighting bigger, stronger wrestling-based guys who have wanted to take me down and lay on me, and I’ve been successful for the most part. So that’s something I have experience dealing with. He’s a strong athletic guy and he has the experience, and he obviously has a pretty good formula for winning these fights, but the other guys he’s faced, they’re not me, and I think I’m gonna bring something different to the table.”

One thing neither fighter will be bringing to the big show is trainer Greg Jackson, who won’t work either corner at UFC 137. Condit will be staying at home in Albuquerque and continuing his camp in the Jackson’s MMA gym though, so even though Jackson isn’t involved, it’s as close to business as usual for “The Natural Born Killer” as you can get.

“That’s where I train,” said Condit. “I know Georges has a lot of different resources, and he travels all over the place, but I don’t really have that luxury. Jackson’s Gym is where I train and I completely understand that Greg has to kinda separate himself from the fight. This is something that I knew before this fight was ever even talked about, and it’s something that I planned for. I already had my ducks in a row as to who was gonna train me in case this fight went down, so I’m confident. I’m gonna be training with Mike Winklejohn and a guy named Chris Luttrell, who was one of the founding members of Jackson’s.”

Confident and ready, Condit is showing no signs of being rattled by the growing spotlight or the last minute change in plans. In fact, he’s embracing it, and if you read between the lines, it’s almost as if his surprise title shot is his destiny.

“I’m as motivated as I’ve ever been, I’m definitely coming into my prime as a fighter and as an athlete, and this is as good a time as any for me to take this fight,” he said.