"It’s a very tough fight, but an even better fight. He’s pretty much the
number two guy in the division, and a solid win over him is gonna put me
right back into title contention." - Carlos Condit 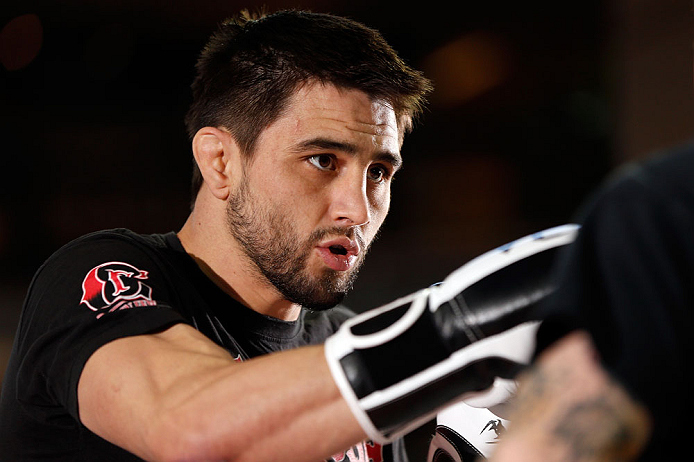 It’s the first and only thing that popped into the head of Carlos Condit last November when he caught Georges St-Pierre with a kick to the head in the third round, sending the UFC welterweight champion to the canvas. For that split second, Condit knew he was only a well-placed punch or two away from removing the word “interim” from his title and becoming the undisputed king of the 170-pounders.

But just as fast as GSP hit the deck, he found his wits, avoided any more serious trouble, and went back about the business of decisioning Condit and retaining his title.

“He did a pretty amazing job of recovering and finishing the fight,” said Condit, who lost for only the second time in seven UFC fights. A Fight of the Night bonus was little consolation for the 28-year-old from Albuquerque, but what he did learn that evening in Montreal was invaluable.

“I feel like I trained the best I could have, knowing what I knew at the time,” he said of the UFC 154 bout. “Until you actually get in there and fight somebody, it’s hard to really gauge a lot of different things. I think I worked maybe too much on countering his strengths and focused too much on that, and not enough on really keeping the things that I’m good at sharp. My opportunity in that fight when I had him hurt, we didn’t work certain aspects of my game just because Georges is considered to be the premier wrestler. We worked on wrestling a ton, we didn’t work on being on top a whole lot, and that came back to bite me.”

2012 was a year unlike any Condit had ever experienced, either before or during his UFC career. With St-Pierre injured and unable to fight Nick Diaz at UFC 143 in February, Condit was moved into the fight for the interim title, winning a close, but unanimous decision over the Stockton standout. Then there was the fight with GSP, and in between all sorts of emotions and new experiences as he dealt with the glare of the media spotlight shining directly in his eyes.

“I gained a lot of experience in the cage and also experience with being loved one minute and loathed the next, and back again,” he said. “2012 was a big eye opener, but I think I grew up a lot in that year.”

Loathed? Not the most affable and accessible “Natural Born Killer” you’ll ever meet.

“After the Diaz fight, I got a lot of heat,” Condit explains. “It is what it is, but it was something I wasn’t used to. I’m used to being the fan favorite, so it was very different.”

More than a year after the Diaz fight and four months following the St-Pierre bout, Condit is back in Montreal and in a co-main event matchup with number one contender Johny Hendricks this Saturday. It’s a big fight in Condit’s quest for another shot at the title, and one he didn’t have originally, as he was scheduled to face Rory MacDonald in a rematch of a 2010 bout won by Condit before the Canadian was forced to the sidelines due to injury.

“I found out on a Saturday afternoon and I was bummed out,” said Condit of losing the MacDonald rematch. “I was excited for the fight, I was really motivated, and so basically until Monday we didn’t have an opponent. And then we found out it was Johny Hendricks, and it got me excited again. It’s a very tough fight, but an even better fight. He’s pretty much the number two guy in the division, and a solid win over him is gonna put me right back into title contention.”

But will he get a shot with a victory on Saturday? Despite his near finish of St-Pierre and the Fight of the Night recognition both received, is it too soon for a return bout should St-Pierre successfully defend his crown Saturday against Nick Diaz? But with a Condit win and a Diaz victory, a rematch of that closely contested five rounder would definitely draw interest around the MMA world right away. Condit’s not working the equations and MMA math though.

“I’m not thinking about that too much,” he said. “I’m thinking about beating Johny Hendricks decisively, yes. As far as where it puts me, I would like to get a title shot, but you never know in this sport.”

Even if a knockout or submission of Hendricks makes a statement that can’t be ignored?

“I don’t usually look at fights that way,” he said. “If I win, 99 percent of the time, it’s gonna be an exciting, decisive win. So that’s not really too much of a concern. Of course I don’t want to edge out a decision or anything – I go in there to finish.”

And when it’s all over, then he’ll worry about what happens next. Or maybe ‘worry’ is the wrong word. Instead, let’s just say that Carlos Condit will be ready for whatever the next phone call from the UFC entails.

“Sometimes things don’t go your way and you’re on the wrong end of things, but sometimes they do, and you just gotta be ready and capitalize on the opportunities when they present themselves.”