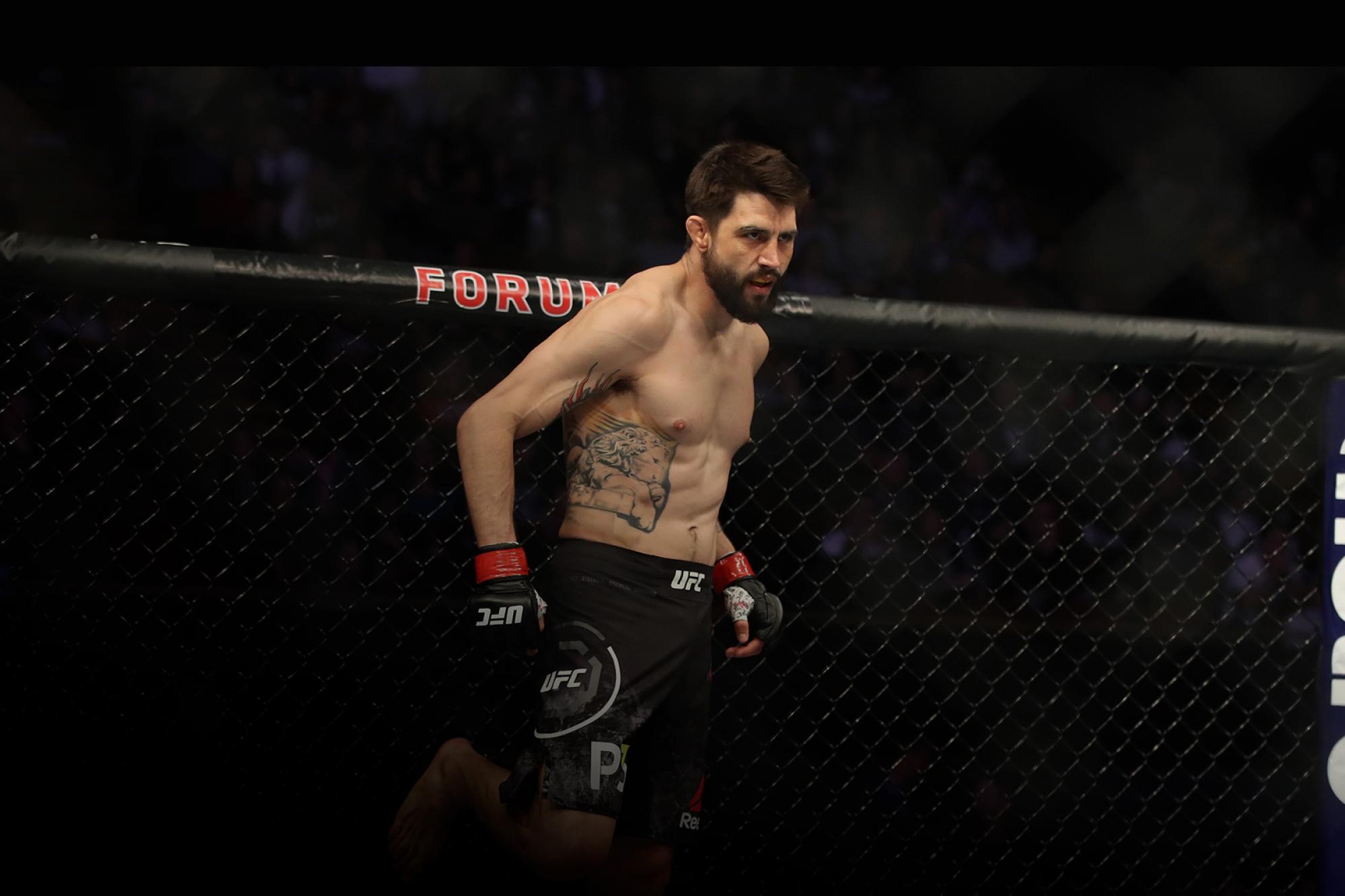 Despite a long career, a long layoff and some recent struggles, Carlos Condit still loves the fight game.
By Zac Pacleb, on Twitter @ZacPacleb • Oct. 1, 2020

It could be the jet lag or the weird hours that a Fight Island fight week entails, but Carlos Condit is supremely relaxed. For a guy like Condit – of which there are few – the ups and downs of a mixed martial arts career are just a part of the ride.

The former WEC and interim UFC welterweight champion has fallen on hard times since capturing that interim belt at UFC 143, dropping his last five fights and eight of his last 10, along with suffering a torn retina in December 2019 that set him back several months. For “The Natural Born Killer,” that hasn’t shaken his enthusiasm at all.

“It’s been a bit of a roller coaster,” Condit said. “I haven’t been performing to the best of my ability as of late. I’m on a skid, for sure, but I think the overarching thing is I love what I do. I get to fight for a living. This is what I always wanted to do. This is literally my wildest dream come true. There’s always so much to learn. I’m constantly trying to improve. Just when I think I reached a certain level, there’s more to do, more to learn, and I’m very curious.

That flame has drawn the 36-year-old to Fight Island, where he is scheduled to battle fellow UFC veteran Court McGee, who is also on a bit of a skid having lost five of his last seven. Records aside, though, this is a fight that features a pair guaranteed to throw down. Sprinkle in some urgency to halt their respective skids, and the bout should provide some sparks once the two engage in the Octagon.

“I know what he’s going to do,” Condit said of the pressure-minded McGee. “At a certain point in training camp, you gotta wrap your head around it. The only way to the other side of it is straight through. I’m going to fight smart. I’m not going to just sit and be dumb and fall into Court’s game, but this is going to be a fun fight.”

An added element of fun for Condit is McGee’s toughness. “The Crusher” has only been finished once in 29 professional fights. Condit, meanwhile, boasts 28 finishes (15 knockouts, 13 submissions) on his record.

“We’re both very, very well-rounded and technical fighters, but we’re fighters,” Condit said. “We’re going to step in there and get after it. There’s no bones about it. This is going to be a nasty fight.”

Condit doesn’t mince words. He knows he needs this win. He needs to make a statement that the all-action fighter people fell in love with over the last decade very much still has it.

That said, though, he isn’t confusing the importance of this fight with some sort of do-or-die moment. He’s just giving the proper amount of focus to the occasion while still carrying an awareness of his situation. Condit has always been a fighter with vision inside the Octagon, and he understands the significance of this bout with McGee.

“Every single fight is the most important fight,” Condit said. “This fight is important for a different reason. It’d be nice to get a W in the column and break that skid.”

Technique plus violence is almost always a surefire recipe for fireworks, which the UFC hasn’t been short of during the last few months.

Condit admits the circumstances surrounding this fight are “definitely unique,” but it hasn’t really shaken him up all that much. He’s “enjoying the hell out of” fight week and expects that to continue once he the Octagon door closes on October 3. He feels like he’s seen it all at this point – or at least enough to know that there’s always something new around the corner.

“The fight game is crazy,” Condit said. “There’s always going to be something, so you just always gotta let preparation and your focus carry you through and not let anything shake you.”