Carlos Condit: On the Edge of Greatness 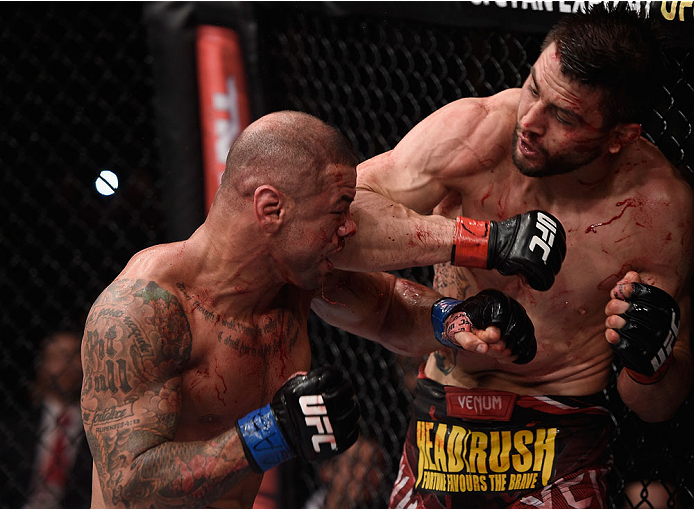 The sport of mixed martial arts is a complex beast - one that is uncertain by its very nature. On one end of the spectrum there is the fast-paced, big tent promotion of the must see extravaganza about to unfold, but on the other, a battle that forces those involved to tap into the depths of something primal, all the while having the grace and agility to fire off hands, feet and knees with the precision that has come from countless hours of sharpening through preparation.

It’s a difficult dance where balance is hard to find, and those who do it best achieve such status by being willing to test their mettle against an opponent in all forms and fashions. Anyone who has watched Carlos Condit fight over the past eight years has a clear understanding that “The Natural Born Killer” is one of the very best in the world at doing what he does, and the New Mexico native has become a staple at the elite level of the sport because of his willingness to embrace aspects of the chaos so readily available in the fight game.

The 31-year-old welterweight’s resume is a reflection of the fire he’s walked through time and time again inside the Octagon, and his collection of highlight reel knockouts serve as violent markers of success achieved at a high clip. Yet, with professional glory and the opportunity to obtain the most prominent prize in MMA fixed on his calendar, Condit’s motivations come from a place far beyond the bright lights of the sport’s biggest stage.

The former WEC and UFC interim 170-pound champion’s fight before the one that plays out for millions to see is waged within his own mind, and his mastery of the emotion that have broken some and have prevented many others from giving their best is the very thing that keeps the Jackson/Winkeljohn product razor-sharp on fight night.

And with any process that yields a refined and calculated product, Condit has worked for years to come out on the winning end of this internal conflict as he’s become one of the most cerebral and technical fighters in the game.

Famous scribe Hunter S. Thompson once described “The Edge” as being a place impossible to describe because the only ones who truly know are those who have gone over it. During his time in the most rigorous of combat sports Condit has gone over that line and back again only to find what is required for that passage to become a resource at his disposal.

“I don’t think it will come as a surprise, but I had a pretty gnarly temper when I was younger,” Condit said. “Being involved in mixed martial arts gave me an outlet. It gave me a chance to explore that aspect of myself in a deeper way without getting in trouble, or being kicked out of school or locked up. It gave me a positive outlet to express a level of anger that I would go as far as calling rage. There was just something inside of me I needed to find my way through, and mixed martial arts gave me a chance to take that journey in a positive way.

“Another big element for me is to face fear. I get scared before fights, but fear is a good thing if you know how to harness it the right way. It gives me a proximity to danger and these guys I’m fighting are as dangerous as they come. I use fear as a tool and I think I’ve had my best performances against the most dangerous opponents I’ve gone up against. Every time I sign on the dotted line to face one of these trained, professional warriors, I’m like, ‘I’m really doing this again.’ But I can have both of those emotions, and many others, running through my head at the same time and can balance them all. I can control emotions that are potentially performance inhibiting and go out there and end someone’s night.”

While Condit’s career has been a decorated one, the past two years have brought obstacles of a far different variety than he’s ever faced previously. The Albuquerque product suffered a freak injury during his fight with Tyron Woodley at UFC 171 back in March of 2014 as he blew out his left knee during the second round of the bout. It was a devastating setback for a man determined to get back into title contention, and instead of stamping his place in the race for the divisional crown, the rangy veteran found himself on the long road to recovery.

Nevertheless, where being as game as they come inside the Octagon has been a keystone in his career, Condit needed every ounce of that same moxie to navigate the type of rehabilitation that would not only bring him back to form, but produce a better, stronger and more dangerous version of himself when his time to return to action arrived.

That fight would come on May 30, in Goiania, Brazil against his peer on the most dangerous in the welterweight fold list, Thiago Alves. His performance en route to victory was highlighted by the 170-pound wrecking machine leveling “The Pitbull” with a perfectly timed short elbow before unleashing the weapons that resulted in a doctor stoppage before the start of the third round.

It was a blistering showing from the perennial contender and one that stamped his official return to the ranks of the ultra-competitive 170-pound fold.

“My performance in that fight validated all the work I had done for the year and a half leading up to it,” Condit said. “I’m not going to go as far as to say there was any darkness or any thought of the injury being the end of my fight career, but that win did have something extra, something a little sweeter attached to it because of everything I went through and worked hard for prior to it.”

Condit’s showing in Brazil also sent a message to the UFC brass that he was ready to resume his hunt for championship gold, and the organization’s reply to said message was a shot at Robbie Lawler’s divisional title at UFC 195 on January 2 in Las Vegas. The announcement that two of the division’s most devastating finishers would finally be colliding inside the Octagon set the MMA world ablaze, and fight fans weren’t alone in their excitement.

In facing the American Top Team product, Condit not only saw the road to make his longtime dream of being the undisputed king of the UFC’s welterweight collective illuminate, but knowing that he was going to be able to give MMA’s passionate fan base another exciting chapter got his blood pumping.

“The fight with Alves was definitely important and spring boarded me into a title shot, but it also highlighted what I’m capable of, and my fighting style when I step into the Octagon,” Condit said. “To put it bluntly, that’s why people love to watch me fight. They love to see me fight because I put on an exhibition of violence, technical abilities, heart and willpower, and all of those things are what people want to see when they tune in or buy a ticket to watch a fight. People get a visceral feeling when they watch fights like that - at least I know I do - and that’s what they want.

“In regard to winning that title, I’ll go ahead and be a bit cliché in saying this is a chance to make my wildest dream come true,” he added. “To be at this point in my career and having had the type of career I’ve had, to arrive at this place in my life through martial arts is literally something I dreamed of as a kid. This was my ultimate fantasy. This was my dream and I’m living it.”