"I relish this pressure. I love fighting
for the largest fighting organization in the world. As far as I’m
concerned, I’m going to retire one day several years down the road as a
UFC fighter." - Carlo Prater 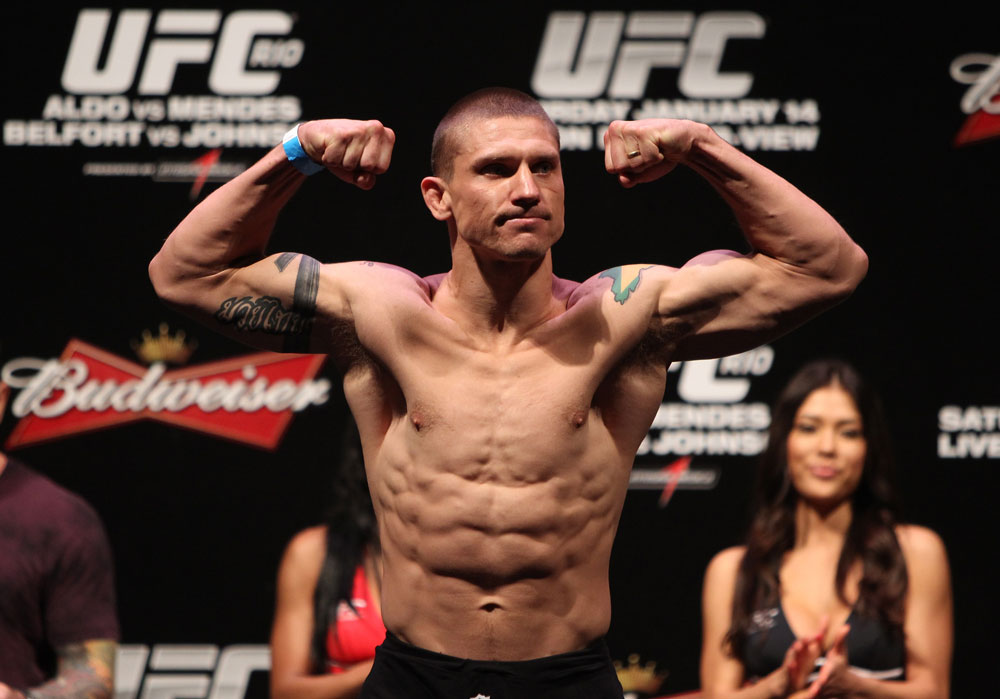 It took 40 fights and nearly ten years for Carlo Prater to make his way into the UFC Octagon.

A veteran who has fought throughout North America and in his native Brazil, Prater had made a name for himself by taking tough fights on short notice, alternating between welterweight and lightweight throughout career, and his UFC debut would be no different.

When Siyar Bahadurzada was forced from his UFC 142 matchup with rising welterweight star Erick Silva, Prater was tabbed to replace him. Short notice or not, it was the opportunity the 30-year-old Brazilian had been working towards his whole career.

The bout lasted just 29 seconds, and while the record shows a victory for Prater, it wasn’t the type of outing he was hoping to have in his UFC debut.

Silva came out like a rocket, dropping Prater almost instantly, chasing him to the canvas with a torrent of lefts and rights in an attempt to finish the fight. As Prater tried to avoid punishment, Silva connected with a couple of borderline strikes, receiving a warning from referee Mario Yamasaki. Silva continued to land, and seconds later, the fight was over, but instead of a second consecutive UFC win in under a minute for middleweight champion Anderson Silva’s talented protégé, Prater took home a disqualification win, much to the dismay of the pro-Silva crowd assembled at the HSBC Arena in Rio de Janeiro.

“I didn’t want that,” says Prater, discussing his inauspicious UFC debut. “I’m pretty sure he didn’t want it either, but it is what it is; it happened. I was feeling an incredible amount of pain shooting down my arm at the time, and I wanted to get checked out. I didn’t care if I had won or lost; I just wanted to be well again.”

Four months later, the 30-10-1 Prater is prepared to return to the cage opposite Canadian TJ Grant in a lightweight contest he plans to use to make a much better first impression.

“I’m anxious with this fight to be able to move past that. It was an unfortunate incident, but I just use it as fuel to my fire. As soon as I was medically cleared, I got back to training down here, and have just ramped it up to another notch.

“I’ve hired different people (for this camp). I’m working with a whole slew of different professionals down here. I’m in incredible shape right now, very focused, and just looking forward to showing everybody why I was contracted in the first place.”

Don’t let Prater’s sub-30 second UFC debut fool you — the Brazilian is a talented and experienced fighter, having shared the cage with the likes of Melvin Guillard, Spencer Fisher, and Carlos Condit over the course of his career. A black belt in both Brazilian jiu-jitsu and luta livre, Prater has been tough to finish throughout his career, while collecting half of his wins by submission.

Yet after suffering through a seven-fight stretch that yielded a 2-5 record, Prater knew he needed to make some changes.

“I’d say me being more a part of my son’s life (had a huge impact),” he explains. “I moved back down to Brazil, and he’s been a tremendous motivation to me over the last year-and-a-half. I take great pride in being able to be a father full-time, and that’s incredible motivation for what I do Monday through Saturday — being able to look at myself at the end of a long day, and say I did the best I could.

“I think (it also) had to do with me surrounding myself with more helpful relationships. I had a lot of relationships — friends, people around me outside of the gym — that just weren’t really pushing me as a professional. I needed to get serious at some point, and I had to take a long, hard, introspective look in the mirror, and get down to the core of what I am and what I do.

“I love combat; I love the huffing and puffing when I’m tired, and bloody, and so is he. I love the challenge of knowing I beat a man, and he was trying to beat me. I had to get away from certain influences and friendships. Other than that, I just focused more and more, listened to my trainers more and more, and do what they ask me to do. It was a shift in mindset and a shift in focus.”

Since dropping a unanimous decision to recent UFC newcomer Reza Medadi in October 2010, Prater rattled off four consecutive finishes to earn the call to replace Bahadurzada against Silva in January, showing the skill set that he hopes to put on display a week from today when he steps into the cage with Grant on the undercard of the UFC’s third event on FUEL TV on May 15th.

Though his controversial debut has been a dominant part of the narrative leading up to the card in Fairfax, Virgina, Prater prefers to heed the words of one of his trainers, and use this contest as the catalyst to a lengthy, successful stint as a member of the UFC lightweight division.

“I like to bring up something that my trainer always tells me. He’s like `Look man, your career starts now. You’re 0-0. Each fight is your first and your last fight.’ You have to look at it like that.

“When you’re fighting for the UFC, you’re no longer 30-10 or 5-1 or whatever your record was previously; you’re 0-0, and that’s every UFC fight you go into. After any fight, you can get canned, so that’s just something I always keep in the back of my head. I want to put on an incredible performance, and that’s what it is — it’s motivation more than anything.

“I relish this pressure,” continues Prater, who handed Carlos Condit the first loss of his career more than seven years ago. “I love fighting for the largest fighting organization in the world. As far as I’m concerned, I’m going to retire one day several years down the road as a UFC fighter. I have no plans on leaving the UFC ever; I want to make it my home, and make it a long, fruitful partnership for as long as I can. I want to be a UFC fighter for a long time to come.”

To keep that dream alive, Prater will need to deliver on against Grant, a tough Canadian veteran who earned a first round submission win over Shane Roller in his lightweight debut back in October. After struggling in his debut, Prater is confident his second appearance will prove he deserves to be inside the Octagon with the best the sport has to offer in the lightweight division.

“The last one was very much just me doing what I’ve done so many other times — taking hard fights against tough up-and-comers in a variety of weight classes on short notice,” admits Prater. “I’ve done that so many times in my career that I have that `screw it’ mentality, but it’s hurt me over the years, taking these really tough fights on short notice.

“And then you’re approached by the largest organization in the world, and every fighter’s dream is to fight for the UFC, including mine, so of course I was dying (to accept the offer). They could have offered me Jon “Bones” Jones, and I would have jumped at it; not that I’m saying I could beat Jon “Bones” Jones. I just feel one hundred percent more confident for this fight, knowing that I’ve put in all the work that needs to be done.”

After accepting a nightmare pairing with Silva on short notice for his debut, Prater has put in a full camp in preparation for his first fight in the UFC’s 155-pound ranks, and Grant profiles as a much better matchup for the Brazilian.

“I think that we’re going to match up well; it’s going to be a dynamic fight. He trades well, he’s a good grappler, and I’m the same. We’re both experienced and well rounded; we’re both cool and calm under pressure.

“It’s going to be a good fight — I can just tell. I think it’s going to be an exciting fight for the fans, and hopefully we put on a great performance, the card goes quick, and we get shown (on the broadcast).

“I’ve invested every cent that I have in this camp,” says Prater in closing. “I’ve taken no shortcuts. Everything I’ve ever been told I should do, I’ve done. I’ve got such a clear conscience at this point. I really like where I’m at right now, and I just want to be able to show everybody that I belong in the UFC, and I deserve to be in the lightweight division with the rest of the great fighters in the weight class.

“I’m going to go out there, give it my all, and let my training do the talking. I’m just really looking forward to May 15.”