Carla Esparza was pushed to the brink in her last fight, but Esparza survived and eventually won. It's a testament to her mentality.
By Thomas Gerbasi, on Twitter: @TGerbasi • May. 5, 2020

With all the attention focused on ESPN’s The Last Dance series, many have brought back one of the most interesting quotes ever from former NBA player and coach Pat Riley, who said, “If I had to choose a player to take a final shot to win a game I’d choose (Michael) Jordan, but if I could pick one to shoot to save my life I would pick (Larry) Bird.”

It was a sign of respect from Riley to the Celtics great, and as I told it to former UFC strawweight champion Carla Esparza a couple weeks back, I admitted that if I needed someone at 115 pounds to win a fight, it might be Zhang Weili or Joanna Jedrzejczyk, but if I needed someone to save my life, it may just be the “Cookie Monster.”

She laughed, and while the 32-year-old Californian hasn’t had the perfect career or has been so dominant as to walk through her opposition with ease, when the chips are down, there’s a toughness and grit to Esparza that has to be appreciated and respected.

Case in point, her most recent win over Alexa Grasso last September. Before the fight, we discussed that refusal to give up and to keep pushing from start to finish, and lo and behold, she had to show it in Mexico City, as a seemingly comfortable decision win turned into a battle for survival in the final five minutes.

Esparza survived, because that’s what she does, and while people will point to that last round and leave it at that, her ability to prevail in that fight started long before the Octagon door closed.

“Not only had I done two weeks in Mexico City, I did two weeks in Big Bear, so a huge portion of my camp was away from my gym, my home, my family, everything,” she said. “But those situations make you stronger and you have to push through. I'm a person who's used to being in my comfort zone. I have my certain training regimen, my certain things that I do and sometimes you get thrown in the mix; even in my fight, I'm not comfortable. I almost got knocked out in the third round, I almost got armbarred and got my arm broken off, but people who know how to survive in the chaos and in the fire are the people who are gonna have success. Fighting is a very unpredictable game, not only in the fight, but leading up to the fight.”

The No. 7-ranked Esparza knows that better than most, especially in the lead-up to her UFC 249 bout against Michelle Waterson this Saturday in Florida. Originally scheduled to face “The Karate Hottie” on April 11, the COVID-19 pandemic kept the bout from happening on that night, and instead we get it this weekend. It forced Esparza to taper down and train back up again to make sure she peaks on Saturday, but that’s just the physical end of matters; mentally, she had to adjust, as well, but the ten-year pro handled that just fine.

“I think that's how it was in the early days for all of us, even me,” she said. “Oh, fight's canceled, oh, the whole show is canceled. You've just got to roll with the punches, so to speak.”

With a decade of fighting under her belt, championship reigns in the UFC and Invicta FC, as well as a stint on The Ultimate Fighter that put her in the nation’s living rooms every week, Esparza has seen more than most. That also adds a level of toughness that shows up whenever things get heated in a fight, giving her an edge that has allowed her to rebound from a pair of losses to Claudia Gadelha and Tatiana Suarez in 2018 to beat Virna Jandiroba and Grasso last year and be in a good position career-wise heading into her bout with Waterson. But did she ever worry that the pandemic would wipe out her chance to take out her fellow contender? 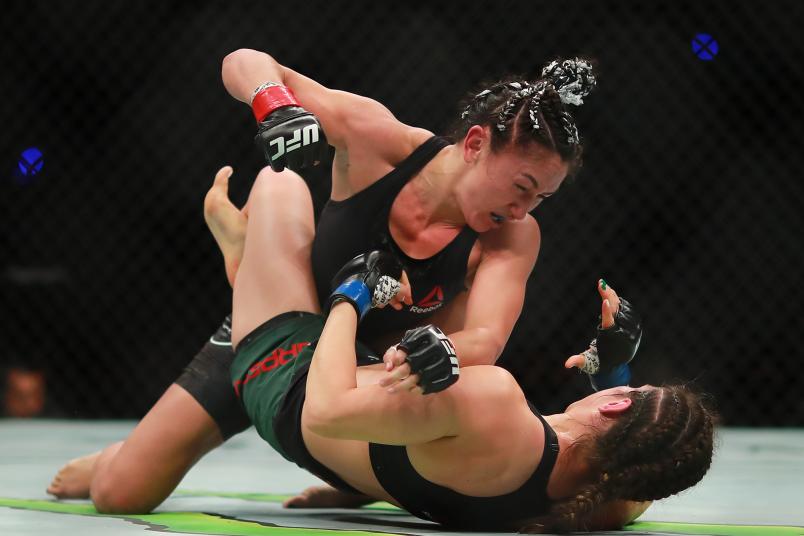 “I didn't think it was a matter of not happening; I thought it was just a matter of when,” she said. “Of course, you want to keep the momentum going, but you gotta take it as it comes and I think that's a champion's mentality. You're ready whenever and for whatever happens, you've got to deal with it and make the best of it and you've still gotta keep coming, and that's just the way I've always felt about this sport. If we had to fight in six months, so be it, but I think Waterson and myself, our matchup is a fight that I think has been a long time in the making, so I knew it was gonna happen eventually; I just didn't know the circumstances of when or where.

“When” is Saturday night, “where” is Jacksonville, Florida. That’s all Esparza needs. And with a win, that’s her first three-fight winning streak since her run to the UFC title. If she gets that belt again, it will cap a remarkable run that began in 2016 with a win over Juliana Lima in her first bout after losing the belt to Jedrzejczyk. For everyone looking from the outside, that’s an epic comeback story. For Esparza, she doesn’t quite know if it will be sweeter the second time around, just as good as the first one, or something completely different.

“If I got it back, this whole journey since I lost the belt has been a crazy ride, but my journey getting there too was different in a lot of ways, but it was almost just as hard,” she said. “There was fighting for no money, fighting all over the place and all these last-minute fights and bigger opponents and going through Invicta and The Ultimate Fighter, just the craziness of everything throughout my whole career up to that point. And now we're on this big platform, fighting the best in the world, and it's ups and downs, all these crazy opponents. So it's really hard to say (what it would feel like). I think I'd have to really be in the moment.”