Carla Esparza: Right Where She Belongs 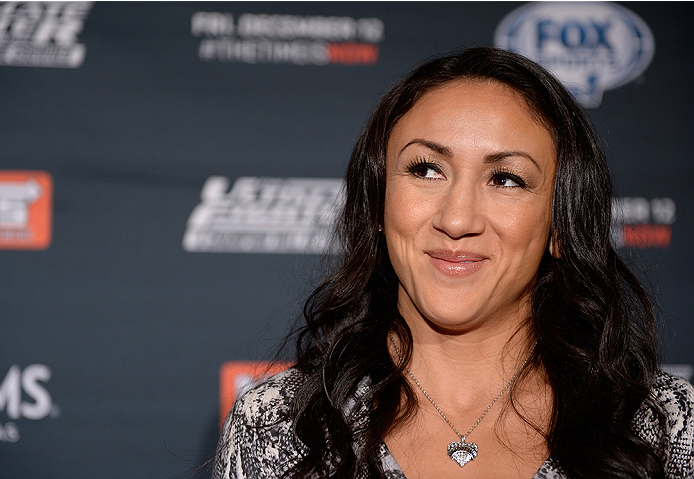 In the world of sports, particularly combat sports, rankings can often be a decent barometer of where a fighter is at in the great scheme of things, but it’s far from an exact science, so entering a fight or competition in the number one spot really means little once the fists start flying.

There are exceptions though, and Carla Esparza is one of them, having entered the Ultimate Fighter house for season 20 as the top strawweight in the competition and leaving it in the same spot, as she will be the last one walking out for tonight’s main event against Rose Namajunas in Las Vegas.

You might say, okay, she’s the best at 115 pounds and she proved it with her wins over Angela Hill, Tecia Torres and Jessica Penne. But there’s a lot of pressure that goes along with that number one spot, and the 27-year-old from Irvine, California felt it. Not because of who she would be fighting but because of the hopes and dreams placed on her by those back home.

“I wasn't feeling pressure for the fight; it was more of not wanting to let people down that believed in me,” she said. “That was a huge pressure on my heart because I know people believe in me and put time into me and they care about me. Going in there, I didn't want to let them down.”

She didn’t, and when taping in Las Vegas had ended, Esparza had proved to the world that she was the fighter to beat at 115 pounds, and also proved to herself that after being out of action since a January 2013 win over castmate Bec Rawlings in defense of her Invicta FC title, ring rust was not an issue.

“After the show I felt amazing,” Esparza said. “I went in there and did exactly what I had planned. I felt great after the show, and I came home with my held high that I did what I had set out to do. I made it to the finals, and I worked my ass off to get there. I hadn't fought in a year and a half and I didn't know how I was gonna do and how everybody else evolved. But at that point, I knew. I proved that I was who I thought I was.”

It was an impressive run made more so by the reality that everyone painted a target on Esparza’s back before the show even began. If you think beating a top fighter like her isn’t a big deal, look what beating highly-touted Tecia Torres on the first episode of TUF 20 did for the public profile of Canada’s Randa Markos.

“I think I went in there with a target on my back, so it's nothing new to me,” Esparza laughed, but while the rest of the cast was gunning for her, the 27-year-old had her own hit list of fighters to watch, and Namajunas was certainly on it.

“Before I even went into the house, I was talking to my coaches about her being one of the biggest threats,” Esparza said. “I had tagged her, Tecia and Joanne Calderwood as my biggest competition in the house, and especially after training with a couple of these girls, I was like 'these girls are really tough, oh crap.' (Laughs) But everybody in the house was a threat. Nobody is someone you can walk through, and Rose not only met my expectations, but she surpassed them. She took the time she had from her last fight and she kept improving, and I think it showed.”

There is no denying the talent level of Namajunas, who finished all three of her foes on TUF 20 by submission. But entering the house, she only had three pro fights, losing one to Torres. Esparza, on the other hand, started the competition with 11 bouts, fights against Rawlings, Felice Herrig, Jessica Aguilar, Nina Ansaroff and Megumi Fujii. She even went the full five-round championship distance against Rawlings. But she is not counting Namajunas out at all despite her edge in experience over the Milwaukee native.

“I would like to say in a normal situation, having that experience and ring time and being with all that top competition really prepares you for any situation,” Esparza said. “But Rose came in there as one of the lesser experienced fighters and she still proved that she doesn't give a crap about what's supposed to happen; she made it happen. So I'm definitely not going to put anything past her just because I have more experience than her.”

That’s a lot of respect to give to an opponent, and it’s mutual from Namajunas’ side, but it won’t mean anything once the Octagon door closes because this one is for history and a world championship. Esparza describes it as “a dream that I never thought was a possibility coming true,” and you can expect her to fight her heart out to get that belt, and she doesn’t care how heavy it will be on her 115-pound frame.

“I want every ounce of that big belt,” she laughs.