Carla Esparza's Run To The Top Of The UFC Strawweight Division Continues At UFC Fight Night: Font Vs. Garbrandt
By Gavin Porter, on Twitter: @PorterUFCnews • May. 20, 2021

When a clash between ranked UFC strawweights pops up on a fight card, it likely means that fight fans are in for a treat, as the division has quickly become a must-see for high octane bouts. That type of reputation has helped build the 115-pound class into one of the UFC’s strongest and most popular divisions.

One of the fighters largely responsible for the growth of the strawweight division is Carla Esparza, who won the inaugural strawweight title bout against Rose Namajunas back in 2014. Esparza defeated Namajunas to cap off season 20 of The Ultimate Fighter, which introduced the strawweights to the UFC.

Since earning the title at the end of the show, Esparza has had her ups and downs, but has caught fire as of late, winning her last four fights. Her resurgence has put her within arm’s reach of a scenario that seems almost too good to be true.

“I feel always driven in the fights but feeling so close to that title shot is definitely extra motivation."@CarlaEsparza1 believes a statement win over Yan Xiaonan can get her a shot at the @UFC strawweight strap 🔊⬆️ #UFCVegas27 pic.twitter.com/B8jAiLBVbC

“A win here puts me in the number one contender spot, for sure,” Esparza told UFC.com. “I beat [Namajunas] the first time, I finished her. She has evolved a lot over the years, and I’ve evolved a lot over the years, so I think we are both very different fighters, but I obviously think I’d have the advantage in that fight. She’s never lost a rematch, though, so that’s an interesting fight.”

Esparza’s opponent at UFC Fight Night: Font vs Garbrandt has similar aspirations, as Yan Xiaonan knows that a win over Esparza could be her ticket to a showdown with the champ. Yan has beaten all six of the fighters that she’s competed with in the Octagon and has shown that she has all the tools to give anyone at 115 pounds a tough fight.

Such high stakes have the “Cookie Monster” motivated and ready to hand Yan her first UFC loss.

“I always feel driven in the fights, but feeling so close to that title shot is definitely extra motivation,” Esparza admitted before mentioning that she enjoys being considered the underdog in the matchup. “I’ve actually had a lot of success in my career being the underdog. Most of my career I was the underdog and I tend to find a lot of success in that; there’s less pressure and more motivation. I actually don’t mind it and I look forward to proving the odds wrong.” 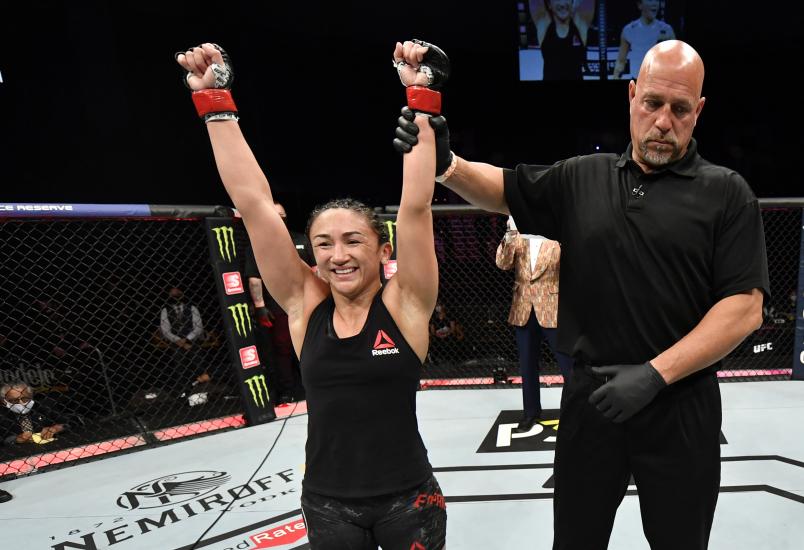 Carla Esparza celebrates after her split-decision victory over Michelle Waterson in their strawweight fight during the UFC 249 event at VyStar Veterans Memorial Arena on May 09, 2020 in Jacksonville, Florida. (Photo by Jeff Bottari/Zuffa LLC)

The Californian has consistently proven sports books wrong by avoiding complacency in her training. After her losses she went back to the drawing board and changed things such as her nutrition and worked heavily to change the way she thought about training.

“I think a couple years ago, before I kind of got on my win streak, I had to go back to the drawing board to figure out what I had to do to start winning again,” Esparza said. “‘I have to evolve, see where I am lacking, what spots can I improve on.’ I think with the sport of MMA there is just a boundless supply of techniques and new things to learn. You can take the individual sports and spend so many years and not know it all, so I think it’s just having an open mind to new ideas and taking that beginner’s mindset back to training.”

An open mind is one of the biggest reasons that Esparza was able to rack up consecutive wins over contenders Virna Jandiroba, Alexa Grasso, Michelle Waterson and Marina Rodriguez. Building on each of those successes as if she was restarting after each fight has been one of the biggest keys to Esparza’s jump into title contention.

The journey hasn’t been an easy one, but Esparza’s belief never wavered and she’s confident that she’ll get one step closer to a title shot on Saturday.