As The Strawweight Division's Inaugural Champion, Carla Esparza Believes Recapturing The Belt Ensures Her Hall Of Fame Status
By E. Spencer Kyte, on Twitter @spencerkyte • May. 3, 2022

Carla Esparza was the first strawweight champion in UFC history, claiming the title with a third-round submission win over Rose Namajunas to close out a dominant run through Season 20 of The Ultimate Fighter.

This weekend, more than seven years after their first encounter, Esparza and Namajunas meet again in the co-main event of UFC 274, with the strawweight title once again hanging in the balance. After entering their first encounter as the top seed in the tournament and the consensus pick at the outset to win the belt, the 34-year-old arrives in Phoenix this weekend as the challenger, hoping to unseat Namajunas and follow her as the division’s second two-time titleholder.

“I think she’s a bigger, stronger version of who she was back then, but so am I, so it’s going to come down to who has made more gains and who is going to come out with a better game plan,” Esparza said, breaking down her rematch with Namajunas. “I know she’s not coming in there to lose; she’s going to bring her all.

“She pushed for this fight, not only because I think she knows I deserve it, but also because she wants to fight the best. She wants the challenge and to take that loss off her record; I know that motivates her.

“Everyone she’s fought twice — whether she beat them the first time or lost the first time, she’s won (the second fight),” she said of the champion, who is a perfect 4-0 in her career in rematches, having avenged previous losses to Tecia Torres and Jessica Andrade, while besting former champions Joanna Jedrzejczyk and Zhang Weili in back-to-back fight scenarios. “I know she’s not coming to play around so, for me, I have to be that much more motivated for a more motivated Rose.”

RELATED: Rose Namajunas Has ‘Leveled Up’ As A Champion

Like many others, the former titleholder felt like she had done enough to merit a crack at the belt following her split decision win over Marina Rodriguez in the summer of 2020. It was her fourth consecutive victory and the first defeat for the talented Brazilian, who went 2-0-2 in her four bouts prior to facing Esparza and has gone 4-0 since to climb into contention herself.

Zhang was the champion at the time, and four months removed from her epic performance against Jedrzejczyk at UFC 248. Namajunas had edged out Andrade in their second meeting two weeks earlier, but many pundits and observers thought that “The Cookie Monster” would get the next crack at the Chinese champion. 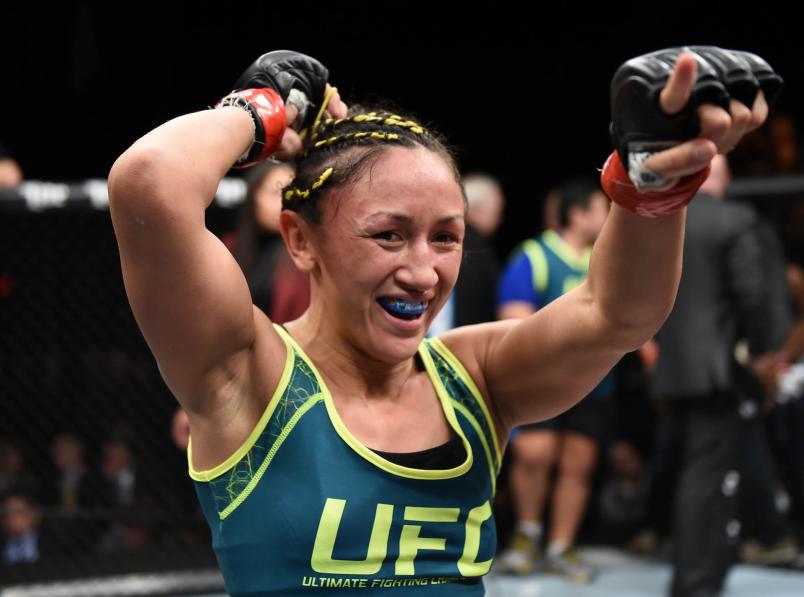 Esparza was down, but it never came to pass. Zhang ultimately landed across from Namajunas at UFC 261, and Esparza was forced to keep battling to defend her position, facing off with Yan Xiaonan in a dangerous pairing four weeks after Namajunas reclaimed the throne.

“It does feel overdue,” began Esparza, who has posted a 9-4 record through her first 13 trips into the Octagon. “I’ve been ready for this fight, I feel like I’ve earned it, but at least now there is no doubt. This is hands-down the fight that had to happen; there is no doubt in anyone’s mind.

“It was nice to go in there and have such a dominant win over the No. 3 fighter because I think that really set it in everyone’s mind, and it made people more excited for the fight,” said Saturday’s title challenger, who scored a second-round stoppage win over Yan last May to lock in her position as the No. 1 contender. “I wanted to have a dominant win. I wanted to show everyone ‘I’m not playing around anymore;’ that thought definitely went through my mind.

“I wanted to quiet any of the doubters. For me, I felt so relieved after that fight because I did what I had set out to do and it was really satisfying.” 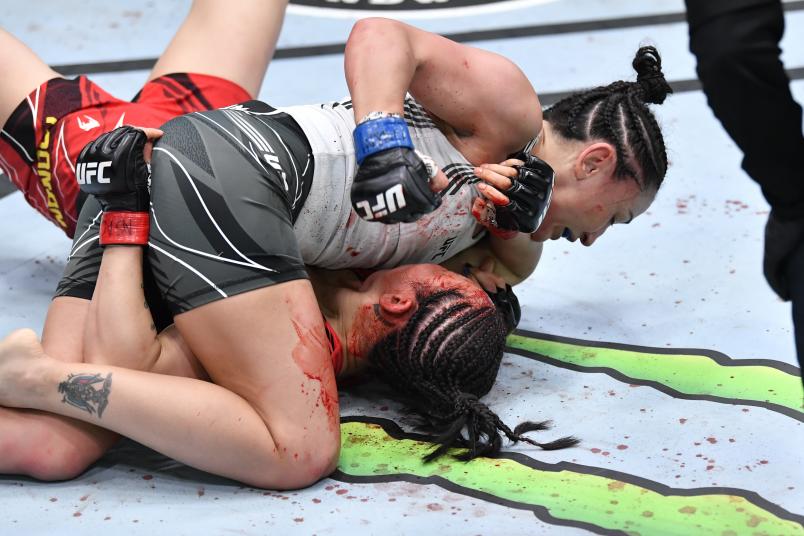 Carla Esparza punches Yan Xiaonan of China in their women's strawweight bout during the UFC Fight Night event at UFC APEX on May 22, 2021 in Las Vegas, Nevada. (Photo by Chris Unger/Zuffa LLC)

While she had to sit through a rematch between Namajunas and Zhang last November, Esparza’s long awaited opportunity to fight for the title a second time is finally at hand.

But Saturday’s championship rematch is about more than just the belt — it’s also a chance for people to recognize all of Esparza’s accomplishments, her place in this division, and the unique path she’s traveled to reach this point.

A pro since the start of 2010, Esparza has been a Top 10 talent in the 115-pound weight class for the entirety of her career, and has spent most of her dozen years and counting positioned in the Top 5.

The first two losses of her career came against divisional legends (and all-around legends) Megumi Fujii and Jessica Aguilar, and she arrived in Las Vegas for The Ultimate Fighter as the No. 1 seed, the reigning Invicta FC champion and one of the two top talents in the division, alongside Aguilar.

While she’s had a couple setbacks over the course of her UFC career and often feels like the forgotten member of the roll call of champions in the strawweight division, she remained undeterred in her quest to sit atop the 115-pound weight class once more.

“I want young athletes — especially young female athletes — to see that you can be respectful, you can be humble, and you can let your actions speak for you. Maybe it’s going to take a little more, but you can do it your own way, if that’s what you want. The path may be a little harder, but you can build your own path. 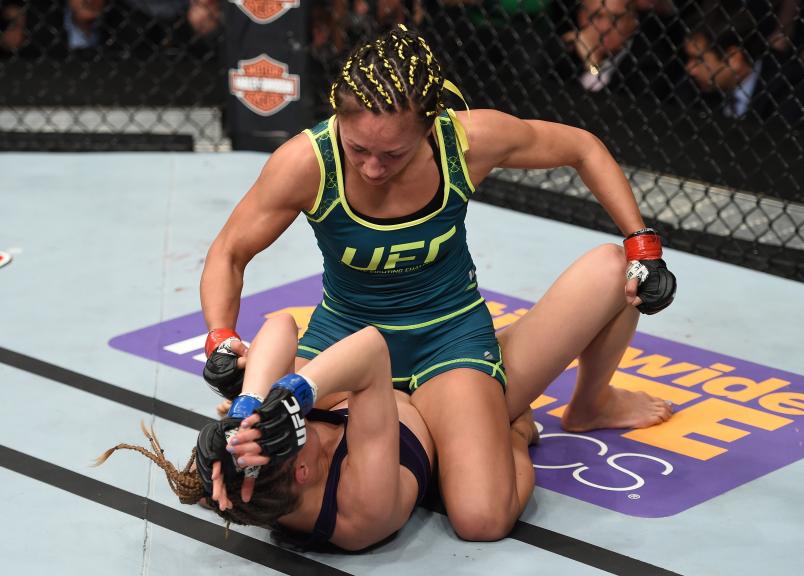 “(Thinking about winning Saturday) gives me goosebumps because for me, winning the title at this point, almost eight years later, really solidifies that I am one of the best that has been out there, but not just for that one fleeting moment in time,” said Esparza. “I didn’t go out there and have one flashy victory; I’ve been consistently getting better and better.”

If she’s successful, Esparza will add her name to the UFC record books for a second time, as she would surpass Hall of Famer Randy Couture for the longest amount of time between championship victories.

“The Natural” went 2,298 days between winning the heavyweight title for a second time at UFC 28 and claiming the belt for a third time at UFC 68; Saturday is 2,704 days since Esparza claimed the title for the first time.

In a way, it’s fitting that it is Couture’s record that Esparza would eclipse, because the 34-year-old former champion sees a victory this weekend as her way of ensuring that she’s one day enshrined alongside the former five-time champion.

“For me, it’s a dream to be in the UFC Hall of Fame, and, to me, this would solidify my spot,” she said.

When I suggested that she’s probably got a good chance to getting in regardless — what with being the first champion in the division’s history and all — Saturday’s challenger fired off a quick counter strike that landed flush and drove home exactly where her head is at heading into this weekend.

“Well that’s how I got the title fight,” she said, laughing. “You’ve gotta get the one extra win to make sure there is no discussion, so that it’s just, ‘You’re in!’”