Carla Esparza Back In Title Contention

Carla Esparza is no stranger to the bright lights of the UFC
By Gavin Porter, on Twitter: @PorterUFCnews • Jul. 22, 2020

Carla Esparza is no stranger to greatness.

The UFC’s inaugural strawweight champion secured the strap by winning season 20 of The Ultimate Fighter: A Champion Will Be Crowned. It is an achievement that Esparza will never forget, and almost six years later she’s still at the top of the division she once ruled.

“The Cookie Monster” has put together a three-fight win streak, with wins over Virna Jandiroba, Alexa Grasso and Michelle Waterson to put herself back into title contention. It hasn’t been an easy journey, but she knows that consistency is the key to getting a shot at the title she once held.

“I’m on a good little streak and if I have a dominant win then that will definitely get me back in that conversation,” Esparza said during Tuesday’s UFC Fight Island 3 virtual media day. “I think after I had my first two losses in a row in my career I just kind of took a step back and really just tried to make some big changes.”

The 32-year-old Esparza will look to display her continued evolution on this weekend’s UFC Fight Island 3 against rising star Marina Rodriguez. It is a fight that Esparza didn’t necessarily anticipate, but the desire to stay active and stack wins pushed her to accept the match with the undefeated Brazilian.

“It won’t be my first time breaking someone’s streak. I go in there to win,” Esparza said with confidence before complimenting her foe’s skill set. “Honestly I think probably her most dangerous part of her arsenal is her clinch game. Her knees and her elbows are super sharp. She has a really nice clinch and has been able to frustrate a lot of people in that position.”

Rodriguez has been impressive thus far in the UFC, defeating Tecia Torres and Jessica Aguilar while battling to draws with Cynthia Calvillo and Randa Markos. It excites Esparza to face a challenger like Rodriguez, who even though she is ranked below Esparza, provides her with the opportunity to earn a second victory during the COVID-19 pandemic.

“Now is the time to take advantage. There are so many fight opportunities for the fighters, but a lot of people are kind of scared and have concerns about the coronavirus and a lot of fighters aren’t able to get the training in,” Esparza said. “The UFC is just hungry to have fighters on these cards and if you’re willing and you’re healthy there is opportunity and you’ve got to take advantage of that.” 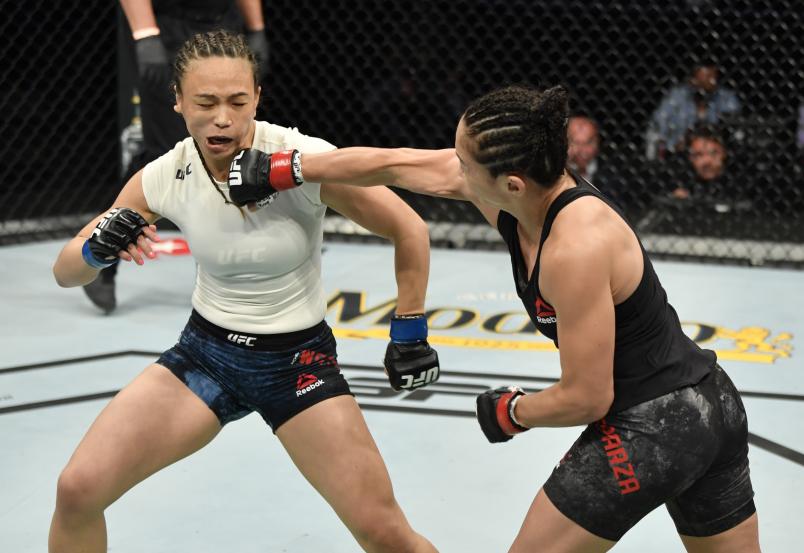 JACKSONVILLE, FLORIDA - MAY 09: (R-L) Carla Esparza punches Michelle Waterson in their strawweight fight during the UFC 249 event at VyStar Veterans Memorial Arena on May 09, 2020 in Jacksonville, Florida. (Photo by Jeff Bottari/Zuffa LLC)

JACKSONVILLE, FLORIDA - MAY 09: (R-L) Carla Esparza punches Michelle Waterson in their strawweight fight during the UFC 249 event at VyStar Veterans Memorial Arena on May 09, 2020 in Jacksonville, Florida. (Photo by Jeff Bottari/Zuffa LLC)

That’s exactly what Esparza did against Waterson at UFC 249 in May and it’s what she plans to do on Fight Island this weekend. Esparza believes that after her first career losing streak she was able to take a step back and reevaluate just how to take advantage of her strengths, but more importantly how to fill some of the holes in her game.
With the ultra-competitive strawweight division delivering impressive performance after impressive performance, Esparza wants to be latest 115-pound fighter to put on for the weight class. And adding to her game and finding the confidence that helped her become the division’s first champion is a major part of that.

Watching the belt change hands has also been a motivating factor in Esparza’s renaissance.

“I think it is great for the division,” Esparza said. “For me, when you have that one champion like a Ronda Rousey or like Cris Cyborg it’s great and they’re stars, but for me, having a few champions and you don’t know who is going to win just makes the whole division and all the matchups more exciting.”

I think that’s what has made the women’s strawweight division the most exciting in the UFC.”