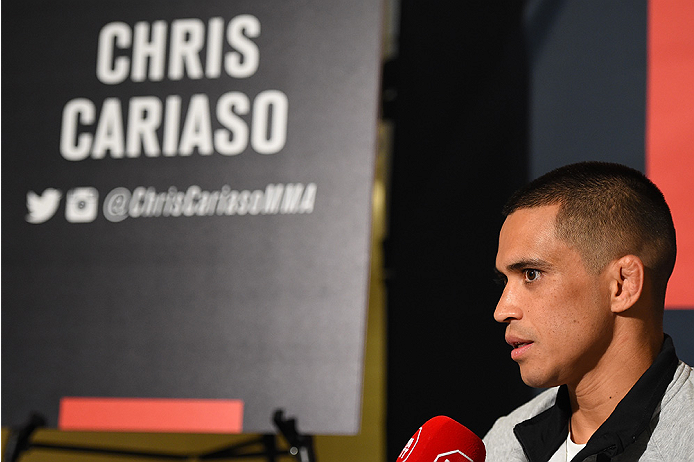 Not every fighter will end up in the Hall of Fame or with a stack of championship belts. That’s just not how it works in combat sports. But few weathered the ups and downs of a mixed martial arts career with more class and dignity than Chris Cariaso, who retired from the sport as an active competitor on Wednesday.

“I’ve got to move on and start training these other guys and start competing on the other side of the fence,” he said. “It was kind of hard finding the motivation to train and to diet and get to 125.”

Dealing with injuries when he went back to the gym after his last fight against Sergio Pettis aided in the 34-year-old’s decision.

“It got me thinking, how much longer can I really do this? I want to take this next step in my life,” he said.

Owner of a professional MMA career that lasted nearly a decade, Cariaso, 34, competed in the UFC, WEC and Strikeforce, and challenged for the UFC flyweight title in 2014. Perhaps even more notably, Cariaso always had a smile for everyone he came across, and when it came to his business in the Octagon, he was a pro’s pro, willing and able to go anywhere he needed to in order to get the victory.

A brown belt in Jiu-Jitsu, Cariaso was also a standout striker, winning a Golden Gloves title, as well as championships in the IKF and ISKA. But it was in MMA that the San Jose native put it all together and made his mark, racing out to a 9-1 record in his Northern California backyard that earned him a call from the WEC in 2010.

“I got to fight for the title, fight the top guys, fight in Brazil and Japan, and at the MGM in Las Vegas. It’s a dream to be able to reach that pinnacle. ... I’m super excited by my career, and I can’t wait to pass that knowledge on to my guys who are coming up.” -- Chris Cariaso

Cariaso went 1-1 with a win over Rafael Rebello and a loss to future world champion Renan Barao in two WEC bouts that year, but in the process, “Kamikaze” made a strong impression. So much so, when the WEC merged with the UFC, Cariaso made the transition to the big show.

Debuting in the UFC in January of 2011 with a victory over Will Campuzano, Cariaso would compete for the promotion 12 more times, retiring with a 7-6 Octagon slate and an overall 17-8 record. Along the way were big wins over Takeya Mizugaki, Vaughan Lee, Iliarde Santos, Danny Martinez and Louis Smolka. And while there were setbacks, there is never any shame in losing to the likes of Michael McDonald, John Moraga, Jussier Formiga and Henry Cejudo.

In September of 2014, Cariaso got his dream fight, a shot at UFC flyweight champion Demetrious Johnson at UFC 178 in Las Vegas. The result wasn’t what Cariaso wanted, as he was submitted in the second round by the champion, but even in defeat, he gave the stellar effort he made his reputation on.

At UFC 192 last October, Cariaso lost a close three-round decision to rising star Sergio Pettis. It would be his last time making that walk to fight, but he has no regrets about his decision to leave the sport on his own terms.

“I enjoyed every part of it,” Cariaso said. “It’s something not many people get to live. I got to fight for the title, fight the top guys, fight in Brazil and Japan, and at the MGM in Las Vegas. It’s a dream to be able to reach that pinnacle. I always wanted that success of winning that gold UFC belt, but at some point, you have to say I don’t want to be that guy who’s 50 years old trying to chase it when it’s not a reality.

“I’m super excited by my career, and I can’t wait to pass that knowledge on to my guys who are coming up.”

Owner of a pair of gyms, Rise Combat Sports in Tucson and Fight and Fitness in San Francisco, Cariaso is also involved with the Nerium supplement company and raising two boys, 8-year-old CJ and Kage, 5, with his wife Jen. It’s a busy life for someone who just retired, but he’s excited to take that next step.

“I’ve been fortunate enough to surround myself with great people, specifically my wife Jen, who’s been there to hold me together in a lot of different ways,” Cariaso said. “And one of the first things that I did, before I got into heavy fighting, was open a gym, and I started teaching. That’s always been my end goal to train fighters and train people, and then fighting just came along with it, and I was able to build a great resume by fighting the best guys in the world all over the world.

“Now, I get this opportunity to move on to this second stage of my career.”