Caraway gets to respond to Sterling Sunday 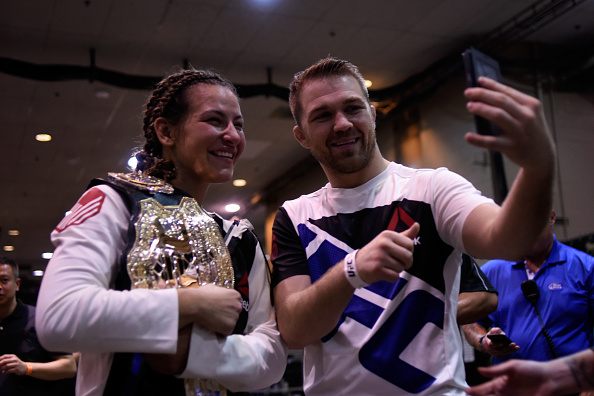 However, Caraway may be facing the stiffest test of his fight career this weekend when he goes up against unbeaten Long Island, NY native Aljamain Sterling. Caraway says he’s been in deeper waters along the way and is not too concerned about this next sail.

“Is he dangerous? Yes. Do I think he's unbeatable? Absolutely not,” “Kid Lightning” said. “Do I think he bit off more than he can chew by calling me out? Yes. I think we have a very similar style. But I think I've just been doing it longer than him. I'm more experienced. I think I'm better than him. I think he’s a good wrestling guy that kicks well, he’s got jiu-jitsu and hits hard with his left. I think he found a little bit of success in that and his head's a lot bigger than what his skill set is.”

A big head is something Caraway has been accused of having as well. He found himself playing the part of the heel on The Ultimate Fighter when Tate coached against her rival Ronda Rousey, and he found out the hard way how one wrong comment could take on a life of its own, and how people seem to automatically root against him.

“I'm starting to get used to being an underdog,” he said. “I really believe that it all comes back to my relationship with Miesha and it revolves around her rivalry with Ronda. I think it just brought a bunch of negativity my way, and once people form their basic opinion, it’s hard to change their minds. I don't do a lot of social media and a lot of interviews anymore because of that. Ronda was a dominant champion and her movie career is something to be proud of. But competition is competition. It is what it is and people need to grow up a bit.”

That relationship with Tate has been an emotional roller coaster for both of them. However, in her moment of glory after beating Holly Holm for the belt that Caraway and Tate worked so hard for, the champ gave her partner credit in her post-fight interview for guiding her career and coaching her to the win, something Caraway was not expecting but was duly touched by.

“It really meant a lot to me,” he said. “We've been together at this from the very beginning. I was her coach from day one and I introduced her to MMA. I was stoked to hear that and definitely touched to get the recognition for all the hard work that we put into training camps and getting sponsors and everything that goes into being a professional fighter. When it finally all came to fruition, it did mean a lot.”

Bryan Caraway trained with Team Quest when Matt Lindland, Dan Henderson and Randy Couture were coming up. He was a kid but learned some hard lessons in an environment that probably wouldn’t survive in this new millennium. Those were the times when MMA was relegated to underground fights where bare knuckles and head butts were de rigueur.

“Sterling doesn’t know about that,” he said. “He doesn’t know about the fights I did outside in the rain. Or the training I did when I was a kid and being somebody’s mop on the mat. Or when I was like 12 years old and got kicked full on shin in the face, shattering my nose, and I just kept fighting to the point where my sparring partner was like, ‘Stop fighting, your nose is gushing’ and I just said I was fine, let’s keep fighting. I have been a tough kid since as long as I can remember. My mother was the one who got me into wrestling because I was constantly getting picked on because I was so small. I have paid my dues. If you watch any of my fights, you know who I am.”

Indeed, against the always-tough Canadian Mitch Gagnon, Caraway showed heart in the face of adversity and ended up finishing the fight with a third round rear naked choke submission. His fight against Eddie Wineland was equally telling, as he took a unanimous decision against the former WEC champion. He says the move to Las Vegas from Washington to train with Robert Follis at Xtreme Couture has made all the difference in his latest surge.

“Follis was also with Team Quest but he was never my coach,” Caraway said. “I was like 19 years old and was more like a guest when we were there. But the thing about Coach Follis is that he gets in tune with a fighter’s emotions. He’s not just a teacher. Anyone can teach but not anyone can coach. He knows how to talk to you when you’re in the midst of battle. He knows what you should do but also how to say it. It’s a different ballgame when you’re fighting for a living. It’s hard to explain but he’s a coach. A real coach.”