Cantwell: 'I've Got To Make Him Quit'

“I’m looking forward to a standup war. He’s a great kickboxing champ and I know he won’t run.” 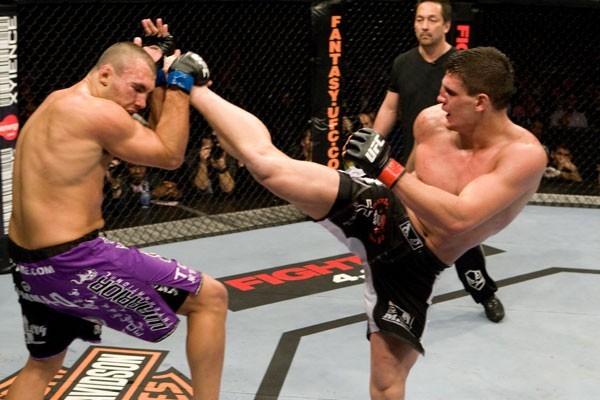 Steve Cantwell holds high standards not only for himself, but also his 125-pound Rottweiler.

Cantwell’s four-legged friend, who has won several dog shows, has an interesting way of saying ‘Thank you.”

“My dog fetches beers,” said the UFC light heavyweight contender. “I’ll be like, ‘Get me a beer.’ And no joke, my dog will get up, open the fridge door and get me a beer.”

Beer, for the record, is not part of Cantwell’s pre-fight dieting regimen. But he’s had plenty of downtime given that he hasn’t fought since last September, when he dropped a unanimous decision to Brian “All-American” Stann. Since then, Cantwell has had one fight fall through and was then sidelined with a knee injury. The 24-year-old, a Brazilian jiu-jitsu black belt under Sergio Penha and a capable kickboxer under the tutelage of Nick “OneKick” Blomgren, is eager to return to the Octagon on Thursday night, when he faces former Muay Thai world champion Cyrille Diabate in Louisville.

“I’m excited to get back out there and put my hands on somebody,” Cantwell asserted. “All this hard work and no reward -- I’m hungry for a win.”

Cantwell, with a 7-3 record, is well-rounded but has shown a preference for stand-up wars. Some think he would be wise to abandon that preference against the 6-feet-6-inch Diabate, who boasts an 81-inch reach.

“He’s the real deal but I feel like his chin has expired,” Cantwell said of the 17-7-3 Frenchman. “His last couple of fights every time he has gotten touched his knees wobbled and he fell down. But I have to touch him before he touches me because he’s extremely dangerous so I’ve got to keep my hands up and stay busy the whole time. I’ve got to make him quit. I’ve got to find the quit in him.”

In one breath Cantwell declares that he’d like to put Diabate on his rump with blows, in the next he blasts his foe’s ground game, even though Diabate has submitted five opponents.

“As good as he is on his feet he’s equally as horrible on the ground,” Cantwell said.

Cantwell and Diabate have one opponent in common: Luiz Cane. Diabate annihilated the Brazilian with a first-round knockout; Cantwell dropped a highly-entertaining three-round decision.

Training MMA since age 15, Cantwell previously held the WEC light heavyweight crown after TKO’ing Brian Stann in 2008. There has been some bad blood between the two men and some cageside observers felt Cantwell actually deserved to be declared the victor in their rubber match. While Cantwell agrees, the loss is not a sore spot with him and he has no ambition of ever fighting his archrival again.

“I trained for Brian Stann and I ended up fighting Greg Jackson,” Cantwell said of their third fight. “Brian didn’t fight like himself, he ran for three rounds which is completely out of character for him. But I still felt like I won the fight, caused more damage and landed the bigger shots. All he did was backpedal and kick my front leg.

“I’m looking forward to a standup war,” Cantwell said. “He’s a great kickboxing champ and I know he won’t run.”