Six fights into his UFC tenure and poised to square off with unbeaten upstart Dominick Reyes this weekend in Santiago, Chile, the 33-year-old is still in the early stages of his development, despite having stepped into the cage for the first time nearly seven years ago and brandishing a 10-3 record overall.

But it was only recently that Cannonier was able to pursue his craft full-time, a shift that included a move from Alaska to Glendale, Arizona, where he now trains under the watchful eye of head coach John Crouch at The MMA Lab.

“As with anything, being able to focus solely on one thing should produce positive results and, in this case, it definitely has,” said Cannonier, who began his career competing in the heavyweight division, faces Reyes this weekend in light heavyweight action and anticipates his next bout coming as a member of the middleweight ranks.

“I don’t want to give it away and say, ‘These are my weapons that have gotten really good,’ because you’ll see it on the day, but my striking has gotten better, my wrestling defense has definitely gotten better and I’m more aware,” laughed Cannonier, who enters off a unanimous decision loss to Jan Blachowicz. “I’ve seen more situations that arise in the cage working with professionals; people who do this day in and day out.” 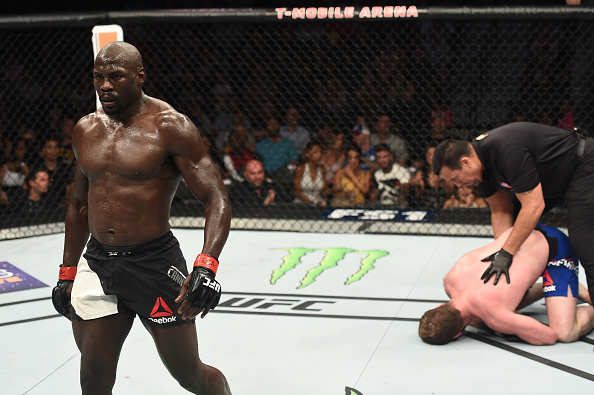 That’s not a knock on the individuals or the gym Cannonier used to call home in Alaska either; it’s just a fact of life for an emerging fighter working his way up the regional ladder from a small gym far removed from a major metropolitan center.

While the heavy-handed former heavyweight had a great deal of success to begin his career, rattling off seven consecutive victories, including six straight stoppages, before edging out veteran Tony Lopez to claim the Alaska Fighting Championship heavyweight crown, the ability to get consistent, quality looks wasn’t there, and upon matriculating to the UFC, Cannonier knew he needed a change.

“Being the lone professional at a local gym, you can’t really expect people to cater to you, but in a professional setting, people know what you’re there for and the coaches and the staff know that they’re there to make me better, to make me become a champion and that’s what we’re doing here.”

The need for consistency doesn’t just apply to training either, but rather extends to all facets of the fight game, including the chance to get meaningful reps inside the cage. Unfortunately for Cannonier, competing in the light heavyweight division has made that difficult.

After competing at heavyweight in his first two Octagon appearances, Cannonier dropped down a division and picked up a victory over Ion Cutelaba in his maiden voyage in the 205-pound ranks. For his sophomore showing, he stepped into the cage against former title challenger and 30-fight veteran Glover Teixeira.

Following a rebound win over Nick Roehrick, Cannonier was quickly matched up with surging Polish standout Jan Blachowicz, who was making his seventh trip into the Octagon and competing for the 28th time in his career.

While he admits that getting a chance to build some momentum and slowly work his way up the divisional ladder would have been the “best case scenario,” the affable “Killa Gorilla” has opted to find the positives in those setbacks and use them as motivation to continue working to be a more complete, more polished fighter each time out.

“Even though I lost those fights, it instilled confidence in me and reinforced that I need to do better. It lit a fire under my ass. I have to be better. I know I am better than what I was on those nights and I just have to be consistently better in those times and be prepared.

“Everything in this sport should be a learning experience,” he added. “If you don’t learn from each fight, you’re wasting your time. I just have to keep getting better and every time I sign a contract, it’s another chance for me to level-up.”

Although he’s already got his sights set on competing in the 185-pound weight division going forward, that doesn’t mean Cannonier isn’t pumped to share the cage with Reyes this weekend.

A former collegiate football standout at Stony Brook University, Reyes has made a seamless transition to a career inside the cage, rattling off eight straight victories with seven stoppages, including a pair of first-round triumphs in each of his first two forays into the Octagon.

Rangy and powerful, the 28-year-old has been garnering buzz as one to watch in the light heavyweight division and while Cannonier is cognizant of what Reyes brings to the table, he also knows there some things the UFC neophyte hasn’t been forced to deal with yet and he plans on changing that this weekend in Chile.

Plus, he just really can’t wait to punch somebody in the face again.

“This dude is undefeated – he doesn’t know defeat – so he’s going to walk in there full of confidence, no fear in his heart,” he said of Reyes. “But anybody that steps in the cage with me is going to go backwards because there is fear when they step in the cage with me.

“I want to go in there and have fun,” he added. “I just want to punch a person again. It’s been a while since I’ve been able to punch a guy with the intent to knock him the f*** out.”