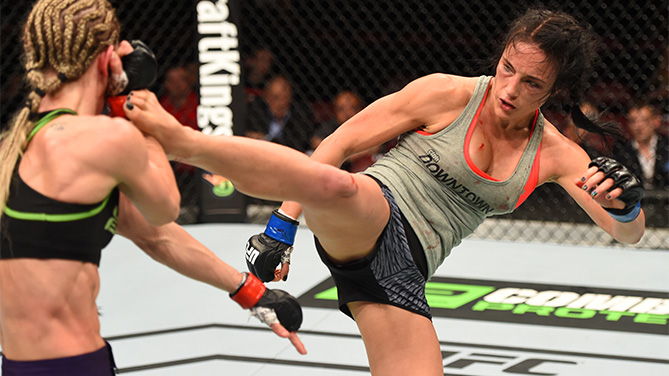 A multiple-time world boxing champion, Rakoczy surprised with a takedown early in the bout, but Letourneau adjusted quickly and locked in a triangle armbar. Remarkably, Rakoczy broke free and got back to her feet, but Letourneau got a takedown of her own. The Montrealer got the mount, but Rakoczy got loose and reversed position, staying in control until the end of the round.

Swollen over her right eye, Rakoczy controlled the action against the fence for the first half of round two, but Letourneau had her chance to shine in the second half, as her more varied striking attack paid off.

Before the third round, the Octagonside physician checked out Rakoczy’s eye and gave her the all clear, but a left kick to the head jarred the Las Vegan as the frame opened. Rakoczy got a brief respite against the fence, and after breaking, the two engaged in some spirited exchanges, each fighter getting in solid shots before a late takedown by Letourneau. 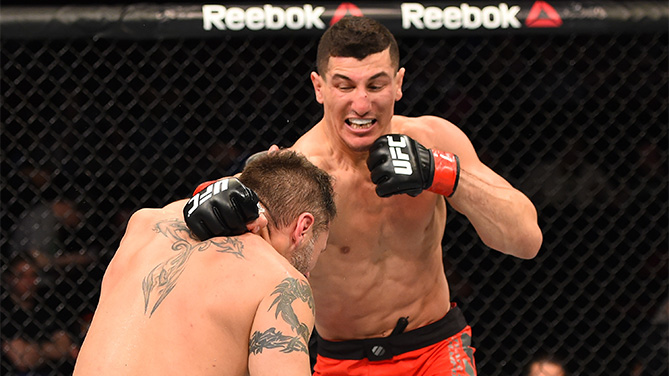 Montreal’s Nordine Taleb started out looking for a striking bout with Ontario’s Chris Clements, but eventually it was the ground game that won it for Taleb, who picked up a unanimous decision victory.
Scores were 30-27 across the board.

Taleb was the most aggressive he’s been in the Octagon thus far, keeping Clements from moving forward as he stalked his foe. At the midway mark of the round he scored a takedown, but the two didn’t stay grounded long. A second takedown with a little over a minute left kept Taleb’s dominance intact, as he refused to let Clements get back up.

Clements was able to keep himself in the center of the Octagon early in round two, allowing him to throw his bombs until Taleb took him down in the second minute. Clements worked for a kimura from the bottom, but Taleb pulled free and resumed his ground control.

Not surprisingly, the fight went right back to the mat in the third, Taleb dominating the striker throughout, Clements had some daylight in the middle of the round where he went for broke, but Taleb secured matters on the mat once more to lock up the victory. 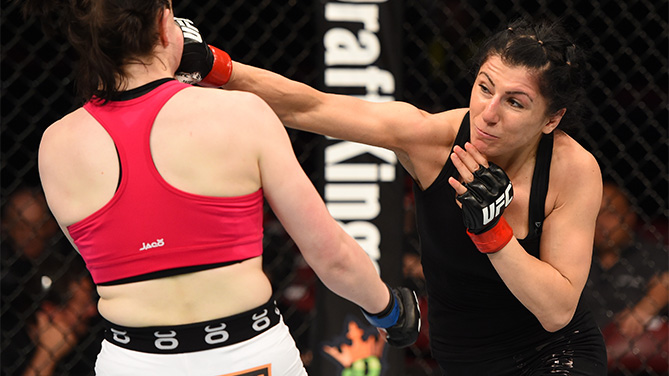 In the strawweight opener, Ontario’s Randa Markos picked up her first UFC win, taking a close, but unanimous, decision win over Ireland’s Aisling Daly in a clash of top ten contenders who were once teammates on The Ultimate Fighter 20.

Markos couldn’t miss with her right hand as the bout began, forcing Daly to seek refuge in the clinch against the cage. Midway through the round, the bout strayed to the mat, with Markos taking Daly’s back.  A minute later, Markos made her move and locked in an arm triangle, but Daly was able to survive and get back to her feet before the horn.

Daly was able to get a takedown early in round two, but as the two rose, it was Markos who took the Dubliner down, proceeding to fire away with strikes as she held Daly in a headlock. The two got back up and grappled against the fence before another trip to the mat, and this time, Daly was able to cut Markos over the left eye before trying to lock in a couple submissions.

The aggressive Daly was able to maul Markos against the fence in the third, but with just over three minutes left, the Canadian scored with a throw and followed up with more ground strikes before it was up and back to the fence, Daly in control. Daly tried for a throw of her own, but Markos was able to turn and get the mount position. Markos then sought an arm, and while she didn’t get it, the round and the fight belonged to the “Quiet Storm.”