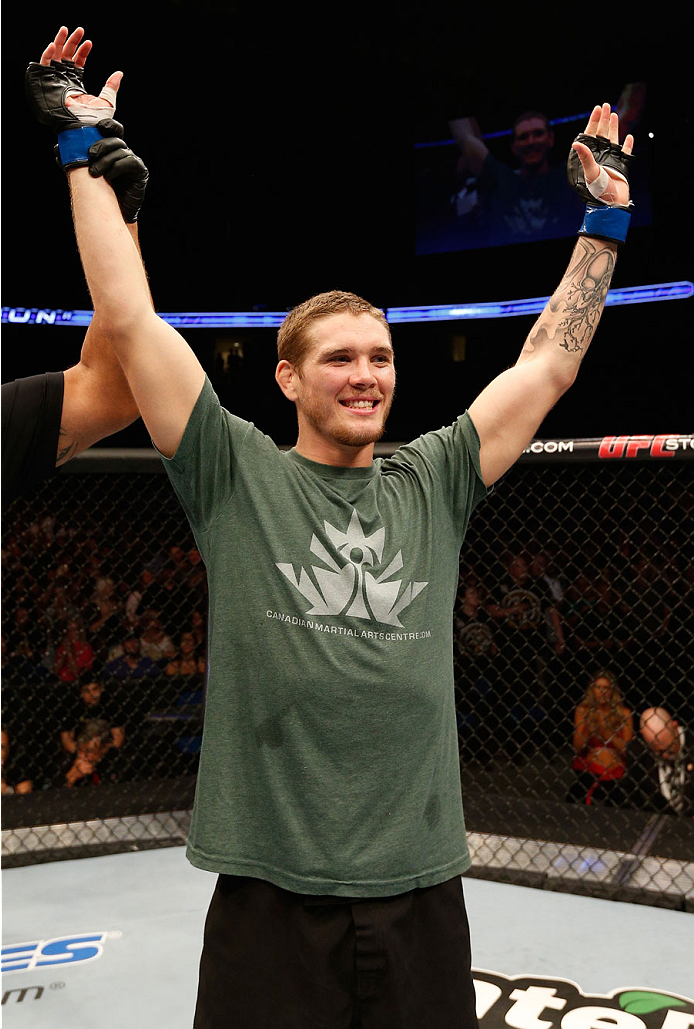 Canadian Jordan Mein's career appears to be at a tipping point.

Following a vicious first-round destruction of Mike Pyle in August, the Lethbridge, Alta. native stated he'd shed the prospect label that hovered over him throughout much of his career. Mein then made it clear in no uncertain terms that big fights were in his future.

“I want these co-main event spots, these main event spots,” the 25-year-old welterweight told reporters at the UFC Fight Night 49 post-fight press conference five months ago. “That's where I belong,”

Mein now has the opportunity to back up his remarks when he faces former title challenger Thiago Alves on the main card of UFC 183 in Las Vegas Saturday. The headliner will see Anderson Silva return against Nick Diaz. The show will be available on pay-per-view, with the preliminary fights airing on TSN 4 at 8 p.m. ET.

Mein said Alves is the perfect opponent for him to stake his claim as a welterweight threat.

“Yeah, definitely,” Mein told UFC.ca during a phone interview Wednesday. “He's had a great name for a long time and it's definitely going to be a good win for me. I wish I would have had a co-main event spot or something, but other fights got booked. People wanted to see more (on the card), I guess — and that's what happened. But yeah, Thiago's a great opponent for me.”

Of course, Mein can keep his momentum rolling in the UFC's 170-pound division, but he also stands to lose footing at the hands of the dangerous Brazilian striker.

Though Alves competed for the championship, that was more than five years ago at UFC 100. Since then he's gone 3-3, with his most recent outing being an entertaining unanimous-decision win over Seth Baczynski to cap off a two-year hiatus this past April.

Mein admitted a victory may not move him up the official rankings, but stated an emphatic win against a name fighter never goes unnoticed by UFC matchmakers.

“I don't know if it will really move my ranking if I beat him,” Mein said. “He's off the ranking (list) and he'd been out (for a while). So I'm not too sure as far as my ranking goes, but as far as the UFC sees me, maybe it'll change a little bit.

On paper, the fight is a striking fan's dream, punctuated by a clash of styles.

In the past, Mein has put his boxing to good use, netting impressive wins over Pyle, Dan Miller and Hernani Perpetuo since joining the UFC roster. However, Alves' Muay Thai skills have been on full display in victories against Matt Hughes, Josh Koscheck and Karo Parisyan.

Though Mein tends not to watch tape on his opponents, he has closely followed Alves' career. He said he has a good idea of what to expect when the octagon door shuts.

“I don't really watch tape on guys, but I have been watching him for so many years,” Mein said. “So I kind of already know what he looks like — his style and his game plan. Other than that, I just try to perfect my technique, my style and then go forward from there.

“(He may fight) more flat footed and then I can maybe move around a little bit more. He's got dangerous leg kicks — that plays against me a little bit. If he kicks my legs, I won't be able to move as well. That's why it's going to be a sweet matchup. I don't know how quick his kicks are. He's also got good counter strikes. So we'll see what happens.”

Mein knows that even if he gets out to an early lead, he can't recklessly pursue Alves. The sole TKO loss on the American Top Team fighter's record came against Jon Fitch in 2006 via stunning upkick, a rare finishing technique in the UFC.

Mein said Alves is a durable and powerful opponent.

“I think he likes to counter a lot,” Mein stated. “As soon as you strike him, he'll take a couple to give one back. I'm going to keep that in mind so I don't get too carried away trying to exploit something and get caught.”

Though Mein aspires to reach the upper echelon of the sport, he isn't looking past Alves. At this point, his focus is purely on picking up an impressive win. Once he's done so, he can spend time contemplating his next steps.

Mein said fans will be in for a treat Saturday.

Regardless of how his fight with Thiago Alves shakes out, Jordan Mein will attempt to race through his post-fight medicals in order to get a good seat for Anderson Silva vs. Nick Diaz.

Though Diaz is considered an underdog going into the bout, Mein said the former Strikeforce welterweight champion shouldn't be counted out.

“Oh definitely,” he said. “I definitely want to watch those two.

“That one's so difficult to call. I like watching both. I like their styles, but they're so different. Diaz is quite a bit of an underdog, betting-wise. It wouldn't be stupid to put money on him because he could definitely win. If you're betting, I think it's a good idea.