Canada vs. Oz Set for Next International TUF 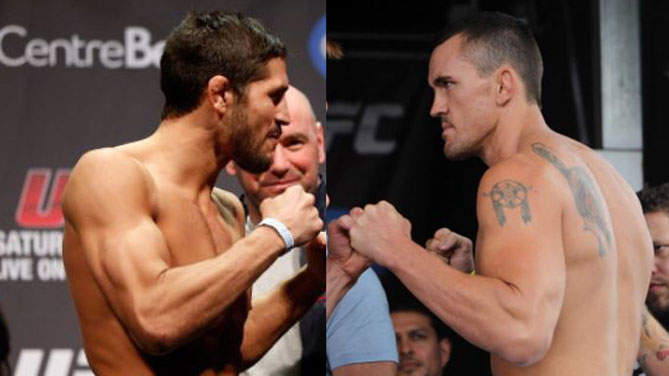 A nine-year veteran of the UFC, Côté first appeared on the reality series in 2006 when he joined a cast of UFC alumni in The Ultimate Fighter: The Comeback. Originally from Rimouski, Quebec, the bilingual fighter was the first Canadian to reach the series final, and remains only one of two Canadian fighters’ to have done so. Cote then went on a five-fight win streak in the UFC, and earned a shot at Anderson Silva’s UFC middleweight title.

Noke, a native of Dubbo, New South Wales, joined the reality series ranks when he fought his way onto season 11, The Ultimate Fighter®: Team Liddell vs. Team Ortiz. He was Hall of Famer Liddell’s No.1 pick, and reached the quarterfinals. He has since gone 4-2 in the UFC, including an impressive Submission of the Night win over Chris Camozzi and a devastating KO last time out over Charlie Brenneman.

Tryouts for The Ultimate Fighter Nations®: Canada vs. Australia will begin in September. Both countries will host casting opportunities, the first in Sydney and the second in Toronto. Further details and registration forms will be available as July 1st at http://www.ufc.com/TUFNations.

The Ultimate Fighter Nations is expected to debut in early 2014. It will air nationally in Canada on Rogers Sportsnet and TVA Sports and on FX Networks in Australia. A complete broadcast schedule will be announced at a later date.

The Ultimate Fighter, which debuted in 2005, has launched the careers of more than 100 UFC fighters and has produced past champions such as Forrest Griffin, Rashad Evans, Michael Bisping and Matt Serra. This will be Australia’s second participation in the series, having taken part in the second international edition battling the U.K. in The Ultimate Fighter The Smashes: U.K. vs. Australia. Welterweights were most recently featured on The Ultimate Fighter 16 and The Ultimate Brasil 2, when Colton Smith and Leonardo Santos emerged as season winners.