"From the life I had to where I am now, sometimes I can’t believe it. I
decided I need a change in my life and I started with facing my troubles
and learning from them." - Will Campuzano

Whether he’s in the gym or the Octagon, UFC flyweight Will Campuzano has learned how MMA can change a person’s life, a realization that came to him after experiencing a harrowing childhood that he wouldn’t wish on anyone.

“Early in my life I was abused by a sexual predator and I was emotionally broken for a long time,” he said. “I was really tormented by it and I had a lot of shame and anger that comes with it. After that happened, I took the wrong path that in my mind, I thought was the correct one.”

Confused and alone, and with his mother struggling to care for him, he became a bully.

“I was beating up kids almost every week. The anger I had built up, I enjoyed beating up on people, because it helped me cope with those tragic events. I felt like I was bigger than anyone else and fighting helped me try to forget the abuse I had to go through.”

Eventually, he had enough of the constant fighting and the backyard brawls. He moved on from street fights and became interested in the UFC. The shame and anger inside began to subside when training in MMA turned into a realistic possibility.

“I was getting bored of the fighting and beating up people in the middle of the street and I decided I wanted to be a MMA fighter. I wanted more of a challenge in my life and the UFC was it. Not only was changing my life hard, but I had very few friends and was very disassociated with people. I had the mindset that if you weren’t any use to me, you weren’t any good to me.”

Campuzano would turn pro in 2008, and when he entered the WEC cage a little over a year later, he felt his maturity level rise. The relationships that he didn’t want to establish thrived each and every day, and putting on those blue gloves were a symbol of something that was very close to his heart.

“Just the atmosphere and putting on the famous blue gloves was something where I had to shake myself at times,” he said. “It was just amazing to go from what I came from to where I was. Who knows where I would be right now if I continued to be known as a bully and beat up on people each and every day for no reason. To enter that cage for every fight is a blessing in disguise.”

Campuzano would go 1-2 in the WEC and 0-2 in two UFC fights after the promotions merged. After 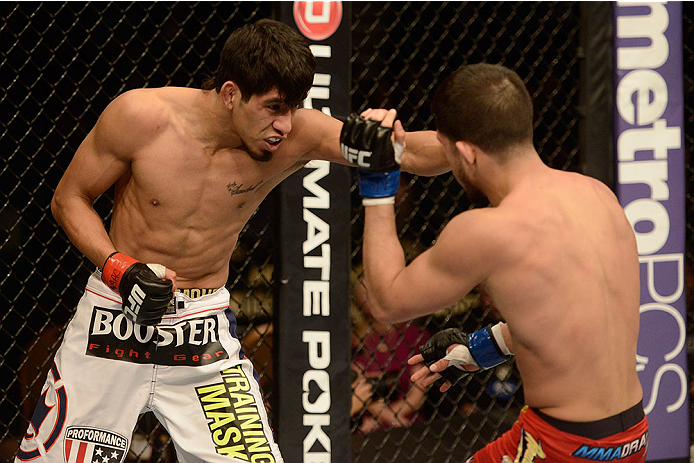 being released after a 2011 loss to Chris Cariaso, the anger and pain was settling in again, but the drive never waned.

“I felt like I was too green back in my first time in the UFC,” he said. “Facing two tough opponents in Nick Pace and Chris Cariaso, I had to preform better. So I kind of knew the release was coming, and the natural reaction was anger. I was mad at myself for not doing enough to show I belong in the company.”

After leaving the company and testing the waters elsewhere, the wins began to pile up again, with a greater maturity the key for him to continue to excel as a fighter.

“I learned a lot after fighting out of the UFC for three years and I really showed that I can evolve as a fighter,” he said. “I won a flyweight title outside of the UFC and when they brought me back for the second time around, I was humbled.”

When Campuzano returned to the Octagon last November, he fought Sergio Pettis on a week’s notice and dropped the fight by way of a close, but unanimous, decision. This time, he worked constructively on sewing up the holes in his game.

“My fight against Sergio, I looked at myself and decided that things needed some tweaking.  The short time frame wasn’t a big issue in stepping in for Vaughan Lee, but I knew some things weren’t fundamentally sound. It was good to look back at that fight and see what I can work on almost immediately.”

That work won’t be idle for long, as his opponent at UFC 171 this weekend - Justin “The Tank” Scoggins - has made a name for himself as a knockout artist. But finishing a fight will be difficult against somebody who also considers himself a finisher.

“Coming from the background I have, I think I’m allowed to call myself a closer,” Campuzano said, who has finished nine of his 13 wins. “Justin is a southpaw just like my former opponent Darrell Montague is. So the change is nothing camp wise; I just have to go in there and produce a win. That’s the task at hand and I need to build off this fight in order to show that I do belong here.”

Along with the goal of gaining wins in his MMA career, the past is still a very big a part of his life. Yet instead of hiding the feelings and anger from the sexual abuse he was put through, he's working with a non-profit entitled “Hope for the Silent Voices” which was created so people that have gone through what he has have a place to gain help, instead of masking the pain.

“I think this group is really strong for those that have been abused at any age. It was really needed in the area because many were getting tormented and emotionally broken. I am leading this charge because I know what it’s like to be lost and scared and not have anyone to go to. To see so many help with this, it’s amazing. Even Justin Scoggins was very interested in what the group was about and tweeted me looking for details.”

With so many helping out with Campuzano’s MMA career, as well as his non-profit organization, it’s been quite the 180 turnaround that nearly 10 years ago could have turned out differently. From being the boy who wanted nothing to do with others, he has set goals to not only turn his own life around, but others’ as well.

“From the life I had to where I am now, sometimes I can’t believe it. I decided I need a change in my life and I started with facing my troubles and learning from them. MMA was a big reason why I am living the life I am today.”

For more information on Hope for the Silent Voices, click HERE