In this edition of Camp Update, we take a look at Iron Army, featuring coach Mark Henry and UFC legends like Frankie Edgar
By E. Spencer Kyte • Jan. 24, 2019

One of the things that Mark Henry is most proud of when it comes to the team of elite men and women he works with is that the group doesn’t actually have a name.

“We really try not to,” said the respected striking coach, who can be found perched in the corner, shouting tailor-made code words to contenders like Frankie Edgar, Corey Anderson and Katlyn Chookagian most weekends. “People throw tags on us like ‘Iron Army’ or ‘RAJJ’ or ‘Renzo Gracie’ or whatever, but I think we’re special in the fact that next week coming up is “Camp Marlon & Said.” A couple weeks after that, it’s going to be “Camp Zabit,” where we can really concentrate on the fighters themselves.”

Henry explained that fighters are inquiring about making the trek to New Jersey to work with the small, but accomplished team of elite competitors he oversees alongside Ricardo Almeida, but those overtures are almost always met by a “no” because growing their numbers isn’t something they’re interested in doing.

“We like to keep it small and give our fighters the attention they deserve, which is impossible to do when you’re that big.” 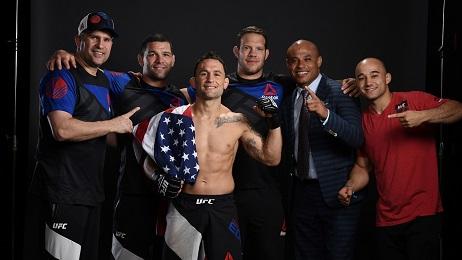 DALLAS, TX - MAY 13: Frankie Edgar poses for a post fight portrait with his team backstage during the UFC 211 event at the American Airlines Center on May 13, 2017 in Dallas, Texas. (Photo by Mike Roach/Zuffa LLC/Zuffa LLC via Getty Images)

DALLAS, TX - MAY 13: Frankie Edgar poses for a post fight portrait with his team backstage during the UFC 211 event at the American Airlines Center on May 13, 2017 in Dallas, Texas. (Photo by Mike Roach/Zuffa LLC/Zuffa LLC via Getty Images)

Bigger doesn’t always mean better, either, and in terms of overall success and standing, there are few teams that are as accomplished as the compact East Coast collective.

Seven members of the team are currently ranked in the Top 15 in their respective divisions, including four in the Top 5, while the two who sit outside of the Top 10 at the moment — 12th-ranked flyweight Said Nurmagomedov, who faces Ricardo Ramos next weekend in Fortaleza, Brazil, and 14th-ranked featherweight sensation Zabit Magomedsharipov — are on the short list of the top emerging talents in the UFC.

It’s not a case of established fighters bringing their rankings with them as they enter into a working relationship with Henry and Almeida either.

“Every one of our guys started off not being ranked when they got here and ended up being ranked, which Ricardo and I are pretty happy about,” said Henry, who points to the progress made by bantamweight contender Marlon Moraes as a prime example.

The 30-year-old Brazilian, who squares off with Raphael Assuncao in a main event rematch with serious title implications next Saturday on ESPN+, arrived in New Jersey as an unranked unknown with a 7-4-1 record.

He’s gone 14-1 since, with his only loss being the razor thin split decision he’ll look to avenge next weekend when he tangles with Assuncao for a second time. Over his last three appearances, Moraes has earned victories over a trio of Top 10 bantamweights, including consecutive first-round knockout wins over Aljamain Sterling and Jimmie Rivera, to cement his standing as one of the elite 135-pound talents on the planet.

“It’s been amazing for a guy to start off 7-4-1, ranked 200-and-something, now ranked at the very top with the best in the world and to see his growth,” Henry said of his charge, who has looked more and more comfortable and confident with each trip into the Octagon. “For Marlon, he’s such a good guy, so the biggest key has been learning how to turn on a switch when you get into the Octagon. 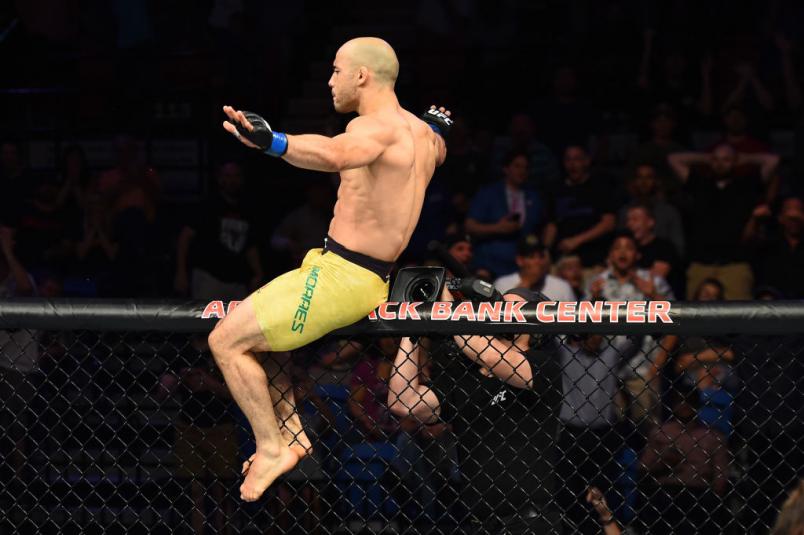 “I remember yelling at him in the third round of the first fight (with Assuncao), ‘Stop touching his hand! Stop touching his hand!’ because he every minute, these guys are dapping each other. It’s a fight; get nasty! But you have to go through lessons and the best thing about a loss is a lesson and that’s one of the main lessons that he learned is that when it’s a fight, you kind of have to separate yourself for those 15 or 25 minutes and focus on what you want to accomplish in there.”

While former lightweight champion Frankie Edgar is the de facto leader of the team — “The General,” as Henry calls him, who sets the tone for the group as a whole in terms of how they carry themselves both in the gym and in the cage — light heavyweight Corey Anderson might be the strongest example of the group’s approach and overall philosophy.

A former collegiate wrestler, Anderson had three professional bouts under his belt when he was selected to be a member of Team Edgar on Season 19 of The Ultimate Fighter. After advancing to the finals and beating Matt Van Buren to join the fraternity of Ultimate Fighter winners, the Illinois native packed his things and headed east to continue learning from Almeida, Henry and the group that guided him to success on the long-running reality TV competition.

While there have been a few hiccups along the way, the 29-year-old wrapped up a perfect 3-0 campaign in 2018 with consecutive victories over Glover Teixeira and Ilir Latifi, the kind of seasoned, ranked veterans who had previously been the emerging threat’s personal brand of kryptonite. 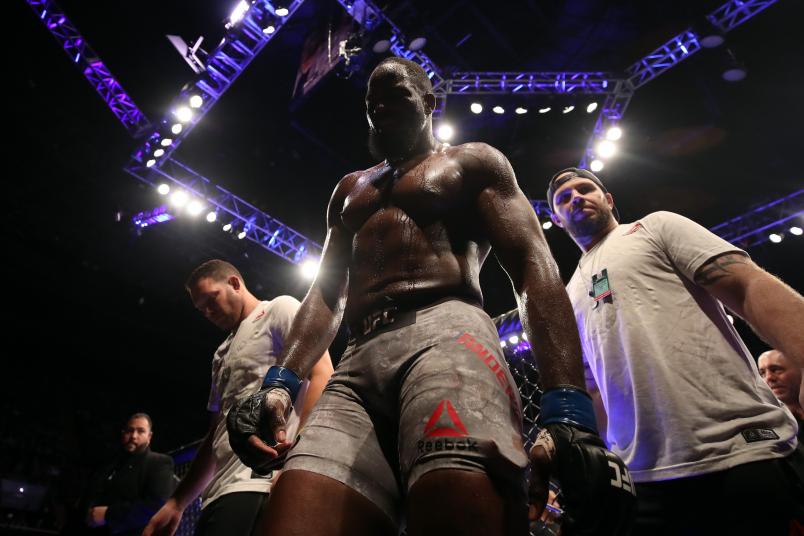 INGLEWOOD, CA - DECEMBER 29: Corey Anderson celebrates after defeating Ilir Latifi of Sweden in their light heavyweight bout during the UFC 232 event inside The Forum on December 29, 2018 in Inglewood, California. (Photo by Christian Petersen/Zuffa LLC/Zuffa LLC via Getty Images)

INGLEWOOD, CA - DECEMBER 29: Corey Anderson celebrates after defeating Ilir Latifi of Sweden in their light heavyweight bout during the UFC 232 event inside The Forum on December 29, 2018 in Inglewood, California. (Photo by Christian Petersen/Zuffa LLC/Zu

“Corey would just keep climbing that mountain, and right when he would get to a Top 5 guy, he’s slip and it was always something little that we talked about,” Henry said of Anderson, who boasts a 9-4 record in the Octagon and enters 2019 stationed at No. 6 in the light heavyweight division. “With (Gian) Villante, it was ‘watch the overhand.’ With (Ovince Saint Preux), we worked so much on ‘don’t put your head to the right and don’t step right’ and he made those mistakes in that fight.

“This last fight was such a culmination of all his work and I yelled to him going into the third round, ‘Climb that mountain!” because it’s just about getting over that hump and knowing that you’ve arrived, knowing you belong.

“I felt that same moment when Frankie beat Sean Sherk,” added Henry, referencing Edgar’s UFC 98 triumph over the former lightweight titleholder. “I felt like that was his moment that showed he belonged with the elite and walked around as one of the best men in MMA — and I feel that last fight was definitely Corey’s moment.”

A little over a month from now, burgeoning featherweight superstar Zabit Magomedsharipov may have his moment as well.

Boasting a 4-0 record in the Octagon and a 12-fight winning streak overall, the 27-year-old upstart is paired off with veteran knockout artist Jeremy Stephens on the absolutely loaded UFC 235 fight card. The bout represents Magomedsharipov’s toughest test to date and a considerable step up in competition from the tough, but limited foes he’s faced thus far.

“The sky is the limit,” Henry said of his promising pupil’s potential. “I was really concerned about how he was going to make out after this last fight and jumping over one million Instagram followers. The kid can’t go anywhere in Dagestan right now and you worry about how he’s going to be for the next camp, but he’s training harder than he has since we’ve been with him.

“Right now, he’s training harder than he has for any of those first four fights. In fact, I have to tell him to calm down because he’ll be done after a two-a-day and he’s there for another 40 minutes after. The sky is the limit. I’m so excited for him.”

One thing he’s slightly less excited about is missing the Super Bowl next weekend.

“I didn’t even realize it until this past Sunday,” Henry, a diehard football fan, said of his scheduling conflict with next weekend’s clash between the New England Patriots and the Los Angeles Rams in Atlanta. “My buddy said, ‘We having the Super Bowl at your house again?’ and I said, ‘Yeah, definitely’ and then my wife’s like, ‘You’re not going to be home.’

“Fifty two weeks in a year and they gotta do Brazil on the Super Bowl,” he said sarcastically. “I could go to Japan and be back on Sunday, you know what I’m saying? They go to Brazil on Super Bowl weekend? I’m going to be in the air for the Super Bowl, I’m so bummed.

“But if Marlon and Said win, it will take all the sting away.”