In cities with a wealth of combat sports talent, it’s inevitable that a collection of those competitors are going to start running in the same circles, training at the same gyms and getting instruction from the same collection of coaches. In many cases, they’ll come together to form a team, whether loosely defined or complete with t-shirts, a logo and maybe a secret handshake.

That’s what happened in Denver, Colorado with the Elevation Fight Team, a collection of athletes that ran together, spending time on the mats at Easton Training Center, High Altitude Martial Arts and three sessions per week at the cavernous MusclePharm facility, with Leister Bowling standing at the helm.

“Three years ago, we started Elevation Fight Team,” said Bowling, a long-time wrestling coach who serves as the outfit’s head coach. “We had three practices a week at MusclePharm, everything else was done at Easton Training Center and High Altitude Martial Arts and one year ago in October is when I reached an agreement with MusclePharm to endorse our team.

In addition to sponsoring the team as a whole, the backing of the supplement company has allowed Bowling and his crew to make the MusclePharm gym its base of operations, bringing the team together under one roof on a daily basis, though Bowling still makes sure everyone on the team is out getting their one-on-one time in as well.

“We have a full pro schedule at MusclePharm and then I tell the guys all the time, ‘You’ve got to get technical work in as well,’ so most of our guys will go to Easton Training Center for jiu-jitsu; High Altitude for jiu-jitsu and striking; some of them go to Ludwig Martial Arts for striking classes.”

For Bowling, the biggest plus partnering with MusclePharm has been creating a completely professional setting where only the team has access. Unlike many gyms, where the pro team practice can come after women’s cardio kickboxing and before the adult open mat session, that isn’t the case with the Elevation Fight Team and their training sessions at their home base.

“I’ve said it for the 10 years I’ve been involved with this sport: MMA is the only sport in the world where you can be sitting on your couch, drinking a beer, eating chips, watching the UFC and say, ‘You know what? I’m going to go join the gym on Monday and become a fighter,’” began Bowling, explaining where the blueprint for how the Elevation Fight Team conducts business came from. “And then on Monday, you can show up and train alongside some of the best fighters in the world.

“If I was watching Sunday football and said, ‘You know what? I’m going to go play for the Broncos!’ I wouldn’t even be able to find their practice schedule. I’m not playing for the Broncos.

“So I really wanted to model our team on this being a professional fight team and the fact that MusclePharm got behind us helped make that possible. It’s a private facility where you have to have a code to get in the door; you can’t join the gym.”

The fact that there isn’t an open-door policy in place with the team is something Cody Donovan stresses every chance he gets. 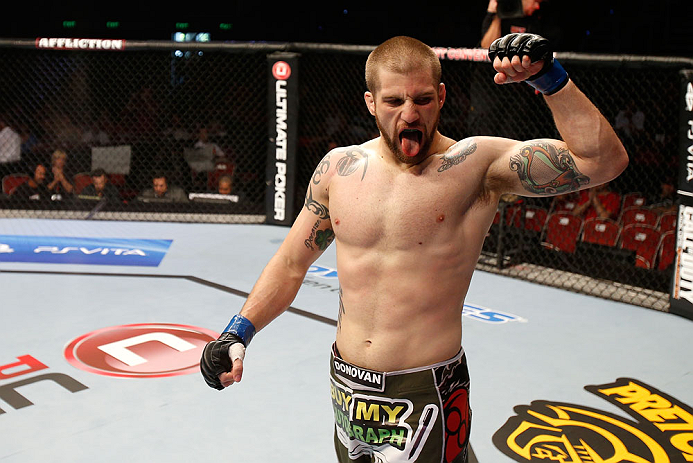 Having hung up his four-ounce gloves a couple years ago, the proud new father and former UFC light heavyweight has transitioned into an assistant coaching role with the burgeoning fight team. Currently working with several of the emerging talents on the Denver-based squad, “Donnybrook” was with the group during its itinerant origins and sees a tremendous change from then to now, much of which he attributes to the partnership between the team and its landlord.

“It’s like the thing that Leister said about the locked door – you’ve got to have a code to get in,” said Donovan, who picked up a Fight of the Night bonus for his short-notice debut win over Nick Penner in December 2012. “Something I say on a weekly basis is ‘Look down at your feet because this is valuable real estate.’ There is no sitting at this table unless you’re bringing something to it.

“The major difference now is all MusclePharm – it’s MusclePharm and it’s Ryan Drexler,” he continued. “Ryan has our back. He believed in this team and the idea of what it could be.”

And the impact the formation and development of the Elevation Fight Team has had is evident in its most active member.

“Matt Brown had been out for four camps prior to our team really starting and TJ (Dillashaw) had been out for two and our main group of guys were beginners in the UFC,” Bowling said. “One of those guys was Neil Magny.”

A former TUF contestant, Magny has stepped into the Octagon 12 times in the last 32 months, posting a 10-2 record over that stretch to climb to No. 9 in the welterweight rankings. He’ll pick up fight number 13 in that stretch at the end of December when he shares the cage with former welterweight champ Johny Hendricks at UFC 207.

“Look at how far Neil Magny has come in the last two years,” boomed Bowling, clearly proud of the strides his charge has made. “It’s insane!” He was on the verge of being cut two years ago and now he’s knocking on the door of the Top 5. 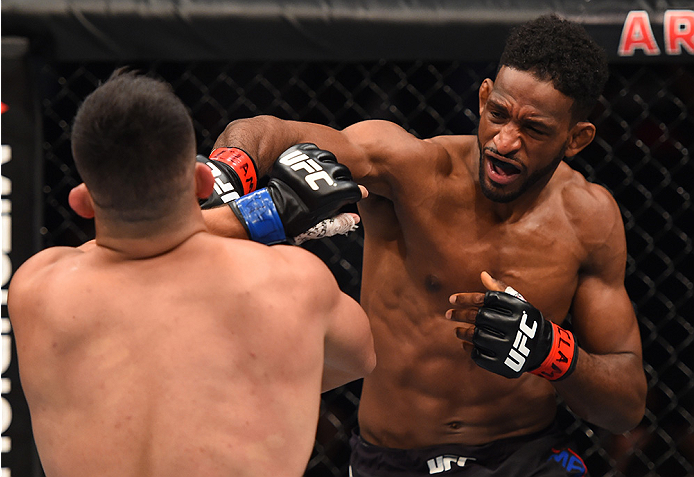 “There is not a person in this world that deserves it more, he added. “I know you hear that all the time and it’s a cliché, but it’s not just his work ethic. Nobody wants to help people move, but Neil helps you move.”

December will be a busy month for the Denver-area fight team, as Brown and Brandon Thatch will join Magny on the year-end card in Las Vegas, while prospect Bojan Velickovic will step into the cage two weeks earlier in Sacramento.

Though it would be nice to run the table to round out the year, wins and losses aren’t the most important thing Bowling is looking for from the members of the Elevation Fight Team.

“We’ve had some ups and downs – some huge wins and some very tough losses,” he offered. “I feel like we’ve lost a few fights we shouldn’t have and maybe won a lot of fights that people didn’t think we would win.

“Honestly, we just try to get better every fight and if we can see improvements in our guys on a win or a loss, that’s winning for us.”
Save