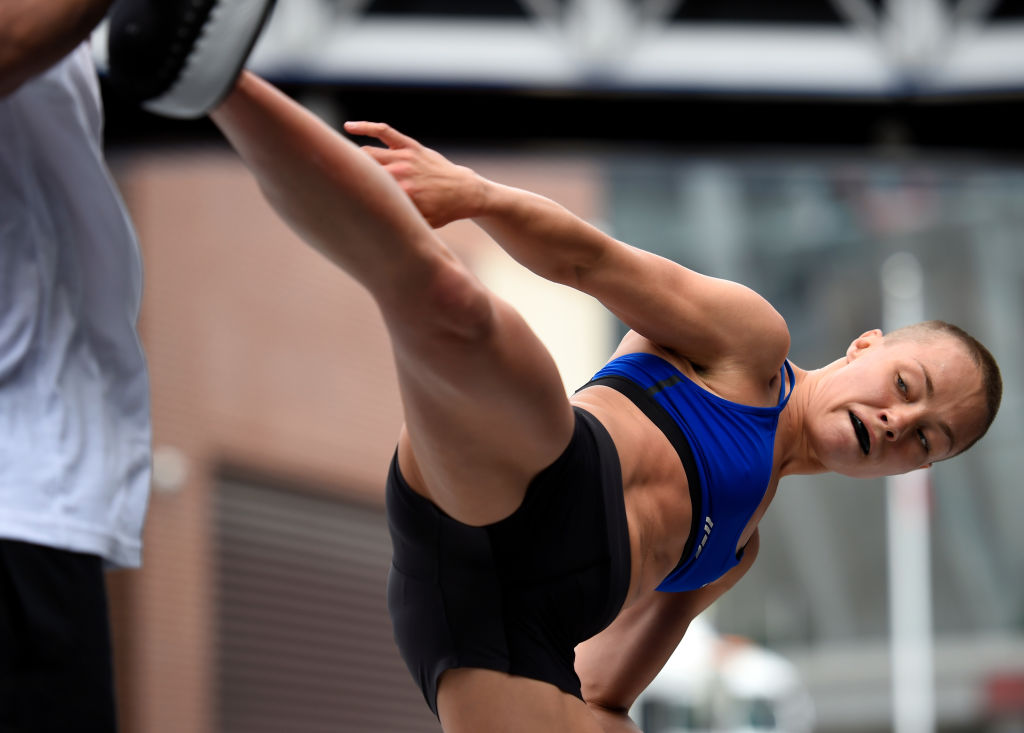 Every time one of his charges are about to enter the fray inside the Octagon, you’ll see Trevor Wittman hanging over the side of the cage during introductions, a broad smile stretched across his face, his eyes twinkling.

“It’s a crazy smile because what we do and what these fighters do is – excuse my language – f****** crazy, but we’re living the f***** dream and I have the best job in the world,” says Wittman when asked about his trademark smile. “I get to hang out with my friends on a daily basis. I get to challenge them and I get to help them chase their dreams and to be able to see them go out there and perform is so rewarding.

First up is Rose Namajunas, who goes from challenger to champion while trading Manhattan for Brooklyn in a rematch with former titleholder Joanna Jedrzejczyk in the co-main event of UFC 223 on the first Saturday of the month.

The title rematch comes five months after their first encounter, where Namajunas dropped an off-balance Jedrzejczyk three minutes into the fight before putting her away with a clean right hand and a torrent of follow-up strikes before the opening frame was over. It was a thrilling performance that kicked off a trio of title changes at UFC 217 and the culmination of three years of diligent work by Namajunas and her team that allowed her to make good on her second chance to claim strawweight gold.

“The best moment of our career was when we lost to Carla Esparza,” says Wittman, referencing Namajunas’ third-round loss in first UFC strawweight title fight. “It made us regroup, sit back and figure out what we all could do better, accept what the struggles are that we went through and how we adjust and adapt to them.”

That might sound like an odd thing for a coach to say just a handful of months removed from a championship victory and staring down a return engagement with the former champion, but it makes sense when you understand the way Wittman views next weekend’s sequel.

While everyone else sees Namajunas’ first title defense as a chance to prove her that she’s the top talent in the 115-pound weight division and a potential star-making opportunity, her coach sees just another fight.

“We’re not defending anything,” Wittman says sharply. “The belt is material. The champion is internal. Anybody that thinks they defend a title all of a sudden becomes a defensive fighter.

“We don’t care whether it’s a rematch or the next girl,” he adds. “We don’t control the matchmaking. We control ourselves. We’re facing Rose. Rose has got to go out there, control herself – stay in the moment and stay present; don’t think about how tired you are in the round or the outcome. When you get out there, you stay in the moment and focus on not making any mistakes for yourself and not hesitating.

“We set that belt down on a table as we go into the Octagon and when you get into the Octagon, no one is the champion in that moment. We’re not defending anything. We’re going in and having another fight.”

As soon as the dust settles in Brooklyn, Wittman will head west to be in the corner of Justin Gaethje as the human demolition derby returns home to Arizona to square off with Dustin Poirier on FOX on Saturday, April 14.

The duo have been together from the outset of Gaethje’s career, which means the seasoned coach has enjoyed a front-row seat to the countless thrilling battles and various symphonies of violence the 29-year-old lightweight has conducted inside the cage over the last seven years and change.

It also means that Wittman understands the 18-1 standout better than just about anyone else on the planet, so while some might be shouting at their televisions, admonishing Gaethje to get his hands up and fight a little more defensively, his coach knows there is a method to his madness and a purpose to the way he operates inside the cage.

“He won Fight of the Year last year and runner-up,” he says of Gaethje, whose debut win over Michael Johnson took home top honors, while his sophomore loss to Eddie Alvarez earned the silver medal. “I mean, how do you do that?”

It’s a difficult task, but the fact that Gaethje was able to accomplish it in his first two Octagon appearances shouldn’t be all that surprising. After all, he openly lobbied for the UFC matchmakers to throw him the toughest fight possible when he signed with the organization following his unbeaten 10-fight run under the World Series of Fighting banner and made it clear that he understood the dangers that come with deploying his all-offense, all the time approach inside the cage.

While some athletes are focused on lengthy winning streaks and championship belts, Gaethje’s desire is to deliver the most entertaining performance possible – win or lose – every time he steps into the Octagon, and both he and Wittman are fully aware that doing so means you’re going to get hit from time-to-time.

“The last fight with Eddie Alvarez, I felt we were right on the way to breaking him,” he says of Gaethje’s UFC 218 clash with the former lightweight champion. “Eddie, you can’t take nothing away from him – he won the fight and picked a beautiful combination to do it, throwing two wide hooks to open up the elbows and touching the head before bringing a knee right up the middle. That was a work of art and much credit to him, but I felt that if that fight goes one more round it was over because (Gaethje) was breaking him.

“We got stopped, but again, that’s our purpose,” he adds. “I really feel like if we went to a decision in that fight and he lost a decision, that would have killed Gaethje because he’s a big believer that, ‘I don’t want a decision. I don’t even want to win a decision. Someone is going out,’ and that’s what makes him spectacular.”

It’s what should make his third foray into the Octagon opposite Poirier an early Fight of the Year contender and part of what puts that maniacal smile on Wittman’s face every time you see him hanging over the fence as Bruce Buffer runs through the pre-fight introductions.