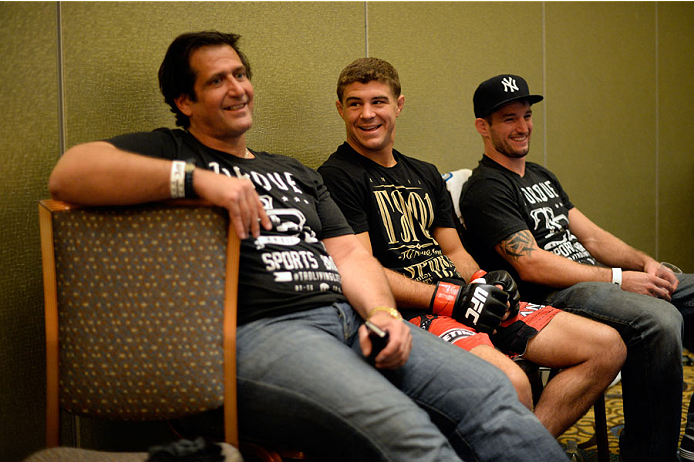 The Longo portion of the Serra-Longo Fight Team does his work on a nondescript street in Garden City, New York. There’s a star on the door to his office in the gym on Commercial Avenue with his name, Ray Longo, written in black magic marker, but the best part about what he does is that there are no stars in his gym.

Sure, Longo is affectionately and respectfully referred to as “The Godfather,” and some of his pupils include former UFC middleweight champion Chris Weidman, bantamweight contender Aljamain Sterling and rising lightweight star Al Iaquinta, but when it’s time to work and time to fight, everyone’s equally important, on the same page, and there for one another.

Just the way Longo wants it to be.

It’s why you don’t hear of any acrimonious splits, any intersquad drama or any out of control egotists putting themselves above the rest of their team. The Serra-Longo fight team is showing up on fight night to win, and because that’s the greatest reward, it’s Longo’s most important duty – to get his fighters ready to have their hand raised.

“At the end of the day, I want a victory, no matter how we get it, and it’s really about coming up with a way to keep winning, because there’s a lot at stake for these guys.”

Notice how Longo doesn’t talk about what’s at stake for him. It’s all about his guys, the ones he prepares for battle, celebrates with when they win, and consoles when they come up short. In the fight game, that’s a rarity, as coaches who gain some renown often become too big for the beginner in the gym or the prelim kid struggling to get ahead. Longo’s philosophy is the same as it was when he began – to teach martial arts.

There was no UFC when the 58-year-old Longo was first exposed to the world that would soon become his passion and his career. He was just another kid fascinated by the tales he heard on the street while playing with his friends.

“I hung out with older kids, and I remember them telling me about this little guy who was just a badass down at the high school,” he recalls. “They said he was flipping people (Laughs), and you gotta remember that in the early 70s, there’s nothing like that around. So I was just fascinated that somebody smaller could gain that much respect. People feared this guy.”

Longo eventually made his trip to the high school to see this for himself, found out that the urban legend wasn’t just real, but teaching for free, and the die was cast. By 1984, he met Paul Vunak at a Jeet Kune Do seminar, and he fell deeper into the martial arts rabbit hole.

Estimating that he has “No less than a thousand martial arts tapes,” Longo took everything in that he could, and in the days before Twitter, YouTube and a world of information being a Google search away, he still devoured anything martial arts related.

“There was no internet, nothing,” Longo said. “If a guy fought in Thailand, you found out about it maybe nine months after. There was no way to find out. You waited until the magazine reported on it. That was a crazy period of time, but as a kid, it was exciting. And that’s the crazy part about being where I am now. Now I’m the guy at Madison Square Garden.”

As the UFC’s first event at the hallowed “Mecca” in midtown Manhattan approaches in November, Longo will likely have some of his gang in action. Weidman and Iaquinta are both looking to return from stints on the disabled list, and Sterling is also eager to get back into the Octagon, and while all have the same forward focus, that doesn’t mean Longo coaches them all the same.

“I really try to cater to what a person’s attributes are,” he said. “Aljo’s going to get trained different than Iaquinta, and Iaquinta different than Chris because they all have special gifts that they bring to the Octagon and I can’t conform everybody to one way.”

All are in different situations heading into the tail end of 2016. Weidman lost his title last December to Luke Rockhold, Sterling lost for the first time in his pro career against Bryan Caraway in May, and Iaquinta has won four straight and is looking for another step up in competition. That’s when Longo the coach turns into The Godfather, the man not just calling out combinations during pad sessions, but the one looking out for his “kids.” So what happens when the team members aren’t being the hammer, but the nail?

“That’s the tricky part,” he said. “In Chris’ example, we brought in Mark Henry, and Mark has infectious energy, and I think sometimes you need to switch it up. Or, you just really address why you lost that fight. Again, it’s a good example with Aljo. He was the nail in the decision, but he didn’t get hammered at all. His was a strategic loss.”

And win or lose, Longo always stays positive, but realistic. He knows that Weidman’s performance against Rockhold was hampered by a broken foot and that Sterling didn’t show off all the tools that made him one of the top young fighters in the sport. That’s the bad news. The good news is that there will always be another fight to get things right, and that the man in the corner will always have their back.

It’s the job of The Godfather, and he’s not going anywhere.

“To this day, I still love the martial arts,” Longo said. “If the UFC closed down tomorrow, I’d still be doing this. My comfort zone was always watching other people do good and me being a part of it. I never liked having the attention on me. I guess somewhere along the way I figured that fighting wasn’t going to be an option, and I was always more comfortable teaching.”
Save