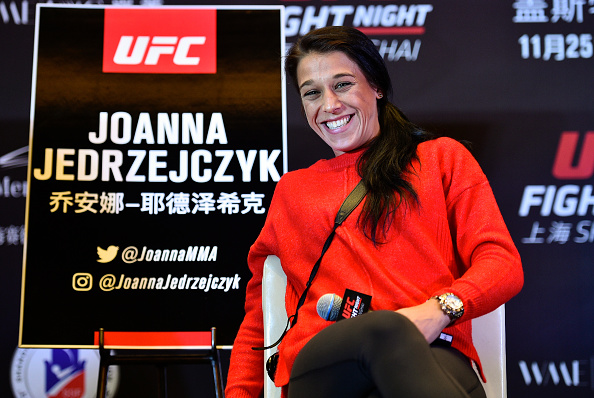 Joanna Jedrzejczyk of Poland speaks to the media inside the Kerry Hotel Pudong on November 23, 2017 in Shanghai, China. (Photo by Brandon Magnus/Zuffa LLC via Getty Images)" align="center" />
You can tell a lot about a fighter by how they respond to adversity and the way they react to setbacks.

Last November, Joanna Jedrzejczyk suffered the first loss of her professional career and dropped the UFC women’s strawweight title in the process. After successfully defending the title she claimed at UFC 185 five times, the Polish standout was dropped two minutes into the opening round by challenger Rose Namajunas and the bout was stopped a little more than a minute later.

It was a sudden, shocking result for many, and one that left Jedrzejczyk in tears in the cage. She also broke down on the dais at the post-fight press conference and fought back tears in several other interviews as well, where she gave credit to Namajunas for her performance, but promised that she would return to reclaim the title in the future.

The fact that she addressed her surprising defeat head-on and was quick to shift her focus to regaining her position atop the 115-pound ranks speaks volumes about her character and maturity, traits her head coach Mike Brown says she has exhibited throughout her training camp for her rematch with Namajunas at UFC 223 on April 7.

“I was really impressed with how she took it,” said Brown of Jedrzejczyk’s reaction to her UFC 217 loss. “I admire how well she handled it. She does a good job of selling the fight and puts a lot of pressure on herself and she does it all really well. After something like this – how things went – she handled it really well. She’s got a really strong mind.

“She handled it better than I would have,” he added with a laugh. “She’s very mature and a smart girl and she really knew how to take care of this thing.”
RELATED: Camp Report - Namajunas and Gaethje

One of the silver linings – if you want to call it that – for Jedrzejczyk coming away from her first professional setback is that she had something tangible to point to as the reason for her uncharacteristic performance.

Her training camp went exceptionally well and as they decamped for New York, everything was trending in the right direction for “Joanna Champion” to put forth the kind of thrilling performance that had become expected of her throughout her title reign.

But then something went awry with her weight cut and while specific details are in short supply and neither Jedrzejczyk nor her team want to delve too deep into the matter leading up to next weekend’s sequel, it’s safe to say that the challenger and her coaches are confident that they have addressed those issues.

“I honestly believe that a lot of it had to do with her preparation with the weight cut and being too big,” said Brown. “I think it was a physical preparation thing and it’s just about letting her know that was the problem and that’s she’s still the best 115-pounder on the planet.

“Just because she doesn’t have the belt doesn’t mean she’s not the best.”

That’s a position Jedrzejczyk has been espousing since her initial meeting with Namajunas as well – that she’s still a champion and the chief architect when it comes to building the strawweight division into what it is today.

“Once a world champ, always a world champ,” said Brown, the former WEC featherweight champion who made a seamless transition to being an elite coach following a 12-year, 35-fight career in the cage. “People will call you ‘Champ’ until the day you die.

“When Mike Tyson is walking down the street, people are still going to call him, ‘Champ.’ It’s a title you hold forever, whether you held the world title for one day or five years. That’s something that will always be with you.”

Now she’s focused on getting that belt back and eliminating any room for confusion and, this time around, Brown expects a very different fight.

“I expect a longer fight and a longer fight will show who the true better fighter is,” he said. “It’s hard to take very much from that (first) fight because it was very short and not a lot happened. You don’t get a lot out of three minutes and anyone can win a fight in a minute or two minutes, but to show true domination or to show who the true greater fighter is usually takes a greater time period – over four or five rounds.

“Anybody can beat anybody in a minute with a good shot or catch them with something, but the world-class, greatest fighters of all-time can do it over five rounds.

“I think she’s in a really good place,” he added in regards to his charge. “(She’s in a) very good place mentally and physically; great shape, confident and a lot lighter than she has been in the past.

“She’s always pretty damn focused. It’s hard for me to say more because she’s always dialed in, but I know this one is definitely a special fight to her.”