"I’m just pushing full steam ahead and not worrying about the past. I’m just looking to string together wins again." - Chris Camozzi 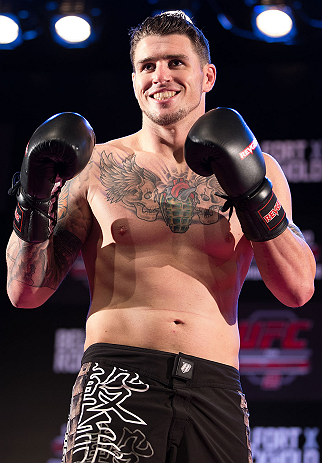 Chris Camozzi felt fine. He was on the mat with perhaps the best jiu-jitsu practitioner in the UFC, but after training with plenty of black belts over the years, he knew what to do when his opponent, Ronaldo “Jacare” Souza, locked in an arm triangle choke in the first round of their May bout.

Just like that, at 3:37 of the first round, the fight was over and so was Camozzi’s four-fight UFC winning streak. But as the old adage goes, you learn more from a loss than a win, something the Colorado middleweight will certainly agree with.

“Anybody who’s ever played a sport knows that it’s totally true,” he said. “You see all your openings, you see all your holes, you get frustrated, you go back, and you break everything down piece by piece. When you win, you usually just move on and say ‘I did good.’ So I was able to look back and see a lot of the stuff I did mentally and physically, with the traveling, and I had to break down the whole trip. And while I think I did a lot of things great, I made one mistake that a guy like Jacare can capitalize on. He’s that good. But it was a good experience for me, regardless of the outcome.”

And losing to the former Strikeforce champion is nothing to hang your head about. In fact, what it’s done to Camozzi is give him something to shoot for as he prepares for his Wednesday bout with Lorenz Larkin: a new and even longer winning streak.

“I think beating Larkin really puts a stamp on the fact that I could have been on a five-fight win streak had I not lost that fight to Jacare,” he said. “So I’m just pushing full steam ahead and not worrying about the past. I’m just looking to string together wins again. I want to start another streak and beat that four fight win streak and go for five now.”

In Larkin, he will be taking on another Strikeforce vet, one not as established as Souza, but with the potential to get there someday. Given the styles of both men, it’s a fight most expect to produce some serious fireworks, which made the announcement that it wouldn’t be televised a surprising one that got plenty of fans up in arms.

“I would love it to be on TV and I think it should be,” said Camozzi. “Our styles and the stats that both of us put up are almost identical, so it’s got to make for a good fight. I’m not a big wrestler, neither is Larkin, so it’s gonna be a standup battle, and that’s what people want to see. But being put on Facebook motivates me even more. Obviously I need to do something more to get to that point, so I feel motivated.”

If you’ve seen the 26-year-old in the Octagon, you’ll know that motivation has never been an issue, as he always shows up ready to fight. And in a fight world where it’s hard to get anyone to agree on anything, fans and opponents all say the same thing about Camozzi: you won’t have to go looking for him when the bell rings.

“That’s a compliment to me, and that’s what I want,” he said. “I want the fans, and the other fighters as well, to perceive me that way because I want to show that exciting style. If I had my choice to have an exciting, but shorter, career or a long, boring career, I would take the more exciting career because I want to be able to look back and be proud of everything I did and have the fans miss me when I am done rather than just forget about me.”

He’s far from done though, and while it was just noted that motivation to fight hasn’t ever been something Camozzi has lacked, this Wednesday he does have a little extra to push him as he competes in front of the men and women of the U.S. Armed Forces.

“It’s an honor to fight for the troops,” said Camozzi, who will also be fighting back on U.S. soil for the first time since June of 2012. “I’ve wanted to do one of these for a long time actually, and I always told Reed Harris and some of the other guys at the UFC that if I could ever do anything for the troops, let me know. So I’m excited to fight on this card for them. I have a lot of family that’s military, and what they do is on a whole other level. What I do is just entertainment. Those guys are the real warriors. They’re leaving their families for a year or two at a time and have to worry about getting killed. That’s got to change you, and it’s a stressful life, but they do it so that people like me can do what we enjoy. So I’ve got a lot of respect for them.”

Camozzi also has a lot of respect for the sport, and the way he shows it is by putting on his gloves, biting down on his mouthpiece, and being ready to fight when the bell sounds. And if he has his way, he’ll be doing that a lot more often in 2014.

“I’d like to fight four times a year if they’d let me,” he said. “So next year I’d like to stay busier, build up even faster, get four fights and four wins, and hopefully that should have me right near the top of the division.”