Camozzi Giving Back Before Big Bout with Cane 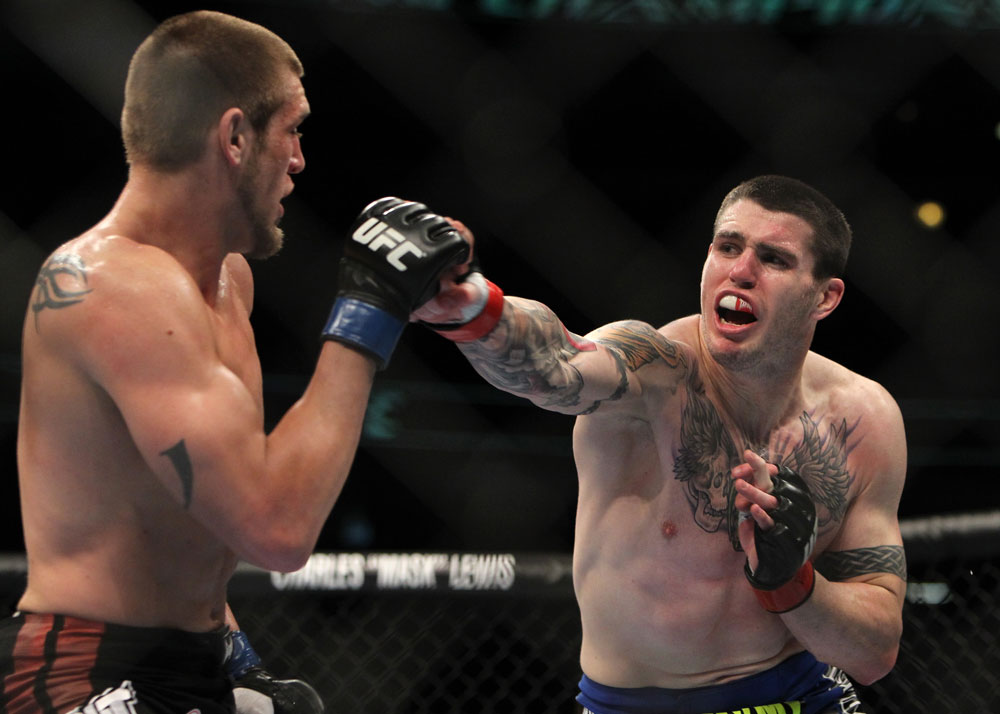 Even though international fight cards usually feature nationalistic cheering and chants for hometown heroes, when it comes to the fighters competing on foreign turf, it’s usually an opportunity to experience a different culture through interactions with the locals and sightseeing around town. Some will even show up in the colors of the country or a sports team to show that they’re just happy to be there and able to entertain on fight night.

Chris Camozzi took his trip to Brazil for his UFC 153 bout against Luiz Cane a step further. Actually several steps further, as he and his manager Jason Genet came up with a plan not just to embrace the Brazilian people and their culture, but to give back to it.

“MMA started in Brazil as far as I’m concerned, and this is kind of a dream come true for me to fight down there,” said Camozzi. “It’s one of the Meccas of MMA, so going down there, I always like to lend a helping hand, so we joined up with Instituto Recao, and it sounds like it’s going to work out great. They help get kids involved in judo, and judo’s a good feeder for MMA, especially if you ask Ronda Rousey.”

Founded by judo Olympian Flavio Canto in 2003, Rio de Janeiro’s Instituto Recao was created to get kids off the street and into the gym. According to its website, the goal is “promoting human development and social inclusion by means of the practice of judo and complimentary activities – cultural trips, physio-therapeutic care, English lessons, learning support, among others.”

For Camozzi, who is donating a portion of his fight purse as well as the proceeds from an auction of his fight-worn gloves and shorts, there is no better way to show his thanks to a nation that gave him the sport that changed his life.

“I’ve been poor plenty of times, and I’m sure the last time wasn’t the last, so it can happen again,” he said. “But I’ve had family and other people that were there to help me out in the past, and it’s kind of a give back or pay it forward thing. And I’ve always been a big supporter of kids. I love kids and helping them out. When I was young, I played every sport there was, and my parents were real supportive of it, and when I was in high school I used to coach little league sports and it’s always cool when you can see young kids getting into the sport. Whenever I come to the gym and I see the kids’ class going, it’s real cool to watch. When I’m older and on my way out, this sport’s gonna be huge and these guys are gonna be making millions and millions of dollars, and I’m glad that I can help them in the beginning.”

That’s a lot of maturity for a young man of only 25, but Camozzi has fit a lot of living into that quarter century. And with a wedding coming up next year, he’s not slowing down at all.

“I think I matured mentally a lot quicker,” he said when asked how he keeps it all together at his age. “Don’t get me wrong, I’ve done a lot of stupid stuff in the past (Laughs), but it forced me to grow up. And I’m engaged now, I plan on getting married next year, and we have a daughter, so I have a family now and it’s time to work. If this is gonna be my job, I can’t slack.”

So it’s a good time for the former Ultimate Fighter 11 competitor to be hitting his stride as a middleweight prospect who hopes to change that title to middleweight contender in 2013. Winner of five of his seven fights since coming off the show, including two in a row, Camozzi admits that it took a while, but now he finally feels comfortable fighting under the bright lights of the UFC.

“I feel like I’ve found my niche in the Octagon,” he said. “My comfort level has totally risen, I feel so much more comfortable in there, and it’s hard to explain, but your first UFC fight feels like your first MMA fight. You’re a little nervous, you don’t know what to expect, and I feel like I’ve finally settled down. I train with awesome guys, I get pushed in the gym, and now it’s nothing new. I finally proved to myself that I can hang with those guys. I think you always question yourself a little bit when you step into the big leagues, like ‘do I belong here?’ And I feel like I do, and I feel like I’m gonna finish this next fight, hopefully in a different way than the other ones I’ve finished. I’ve got one submission in the Octagon, I’ve got one TKO, and now I want a knockout. I’ve got decisions already.”

Camozzi won three rounders in his first two UFC bouts, decisioning James Hammortree and Dongi Yang. His third Octagon victory was a third round submission of Dustin Jacoby in January, and in his most recent bout in June, he stopped ultra-tough Nick Catone on cuts in the third round of a bloody battle that looked, well, like a Chris Camozzi fight.

“I like the fight to get dirty like that,” he said. “When I see my opponent bleeding, I’m like a bull and it’s green light for me. I’m not tired anymore, and I get more satisfaction out of seeing an opponent mentally break in the ring, rather than just ending it. There’s no better way to win than breaking somebody, and I felt like I had Nick Catone on the verge of that, and that’s when I really turn it on. I wasn’t tired or anything. I felt real relaxed and I knew I was gonna finish that fight.”

As laid-back and soft-spoken as Camozzi is, seeing him in a fight is a totally different experience. He’s not one to shy away from a scrap, and if the blood, sweat, and spit are flying, he’s in his element. But when you ask him where it comes from, he shrugs his shoulders.

“I don’t know,” he said. “My parents just raised me to be a tough kid and have a ‘walk it off’ attitude. I played rugby, which I consider to be one of the roughest sports that there is, and I was always that kid who was stoked about getting a black eye. I thought it looked cool. So I don’t know where it comes from, but I see it and I want to keep going. I see win, win, win right away, and it’s just that killer instinct that some people are born with.”

That attitude is what makes his Saturday meeting with Cane so interesting, because the Brazilian banger shares that kill or be killed mentality in the Octagon. Odds are that this one won’t go three rounds, and if it does, both will look like they’ve been in a fight. That’s the good news. The potentially bad news? Well, it may be bad for Cane because Camozzi believes that the newest member of the middleweight division won’t be happy with what he sees on fight night.

“He (Cane) was fighting at 205, which is an extremely tough division; you’ve seen how many times the belt changed until (Jon) Jones,” said Camozzi. “But I think the difference is that he’s gonna cut a lot of weight, and he’s gonna realize that I could be a 205er. So his first fight dropping to 185, where he’s hoping to fight smaller guys, I’m gonna be a bigger guy than he’s expecting. I’m 6-3, I walk at 220 sometimes, and I think I’m just as strong as a lot of those light heavyweights. So I don’t see it as much of a different fight for him; it could be a 205 fight.”

And if everything’s equal physically, Camozzi believes that his punching accuracy may very well be the difference against the occasionally wild-swinging “Banha.”

“I think it plays a big role,” he said, “and I just need to touch his chin as many times as it takes. I’ve come a long way in this camp, I put a lot more power on my punches, and I’ve gotten a lot stronger.”

But what about the inevitable boos?

“I won’t be shocked if I’m booed,” he laughs. “I get booed in my own country sometimes, like when I fought in New Jersey.”

Rio de Janeiro ain’t Atlantic City, but then again, Chris Camozzi isn’t the same fighter he was four months ago either. The only thing that hasn’t changed is his belief in his fists to take home a win. That never changes.