Camacho returns with some more tools in the box 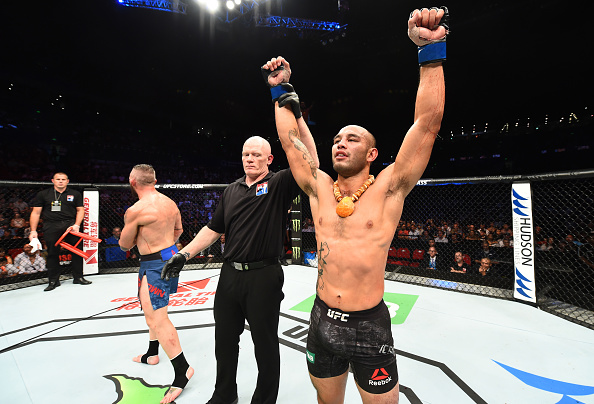 When describing his UFC career to this point, Frank Camacho couldn’t be more accurate.

“I fought three times in eight months, so it was like boom, boom, boom,” said the pride of the Northern Mariana Islands.

It sure was, with each boom against Li Jingliang, Damien Brown and Drew Dober producing Fight of the Night wars that boosted Camacho’s bank account, even if he only emerged with one win from those three bouts.

Yet while Frank “The Crank” made an immediate impression on UFC fans and established himself as a must see, he knows that as he approaches a UFC 228 bout against Geoff Neal, there is more to show.

“We have been training and talking about it, and my coach has been saying. ‘Frank, you’ve been bringing a knife to a gun fight all the time. You have so many more tools in the tool box.’”

That must be some knife, and Camacho laughs.

“I just finished up 90 minutes of wrestling and you don’t see any of that in my fights,” he said. “So we’re just dialing it in and I’m so glad that I’ve had some time off to work on these things. And not even just work on it, because I’ve been working on it, but to mentally prepare and know that I’m not just going into my next UFC fight fresh and with awe. Now it’s, let’s do it and let’s implement what we’ve been working on.”

Camacho is a brown belt in Brazilian Jiu-Jitsu, he’s medaled in several grappling titles, and he can be technical when he wants to be. But there’s something about the heat of the battle that has Camacho tossing his game plan to the side in favor of brawling.

“With Drew Dober, I was trying to draw out his left hand so I can slip it and then counter,” he said. “The same thing with Damien Brown, I was waiting for him to throw that jab so I can slip it and throw my right hand and my combos. Against ‘The Leech’ (Li), the second and third rounds, I was gone, I was tired. (Laughs) But yeah, it’s my style and I have a really good coaching team where we’re trying to fine tune it, take less damage, and build off of that. They tell me, ‘Frank it’s okay to reset.’”

Having last competed in January against Dober, Camacho has had that time to reset. Not just in the gym, but outside of it. He and his wife welcomed a second son, Rocky, into the world in July, and he has also been spending time honing his craft when it comes to photography, with the Instagram page @caughtbycrank showing that this prizefighter has quite the eye behind the lens.

“Maybe that balances me out,” he said. “Everyone has a story and I feel that through the camera I’m able to capture regular people’s greatness in their moment and journal it.”

It’s been a nice eight months to settle in and get ready for the next phase of his career, but this weekend, it’s time for Frank Camacho to get back to the fight business.

“You know how the saying goes, through fighting I’m able to paint a picture and the fighting is my canvas, but my last three fights, it’s been a pretty messy canvas,” he laughs. “And I feel I have more tools and more things to paint a clean picture. So I’m excited to take everything I’ve learned and just get better.”