Camacho finally got the call he's been waiting a decade for

Only time will tell if Octagon newcomer Frank Camacho is the toughest fighter in the UFC. But for now, suffice to say that the Saipan welterweight may be the toughest golfer on the planet.

“I would say so, at least until another golfer can go out there and make a case for himself or herself,” he laughs. “At this time, yeah, I'd have to say so.”

It could have been a whole other life for the 28-year-old had he achieved his first sporting dream to make it on the PGA Tour. But despite golfing “religiously,” he got pulled in another direction, one that has led him the highest level of another sport – mixed martial arts.

The actual journey to get here wasn’t as clean and tidy as that description, though, as Camacho has logged 24 pro fights, gotten through a missed shot at The Ultimate Fighter, and basically made his way in a place that is far from a hotbed of MMA. So needless to say, he was a little more amped up than most when he was called on short notice to replace Jonathan Meunier against Li Jingliang in Singapore on Saturday.

“I've waited for that call for more than a decade, man,” he said. “It was a dream come true. My wife and I always talked about it, and we knew it was really just a matter of time. When we did get the call, our mindset immediately shifted to, ‘OK, let's do the work.’”
RELATED: Camacho matchup with Jingliang | Singapore Fantasy Preview | Three fighters On the Rise

Having just fought on May 26, when he submitted Gun Hwan Park in the second round, getting in shape wouldn’t be an issue. Putting all the other pieces together for a short camp would be, looking from the outside. But as Camacho puts it, it’s not as hard as it seems.

“Location-wise, we're three hours from Japan, three hours from the Philippines, three hours from Korea, and four hours from Australia,” he said of life in the Mariana Islands. “We're right in the mix, with a good amount of opportunities to take advantage of. We have access to promotions where we can be seen, and as far as the level of training, we've got some very, very good coaches here and a lot of really great training partners. Finally it's all coming to fruition; it's coming along really well and I know the sport here is going to continue to grow rapidly.” 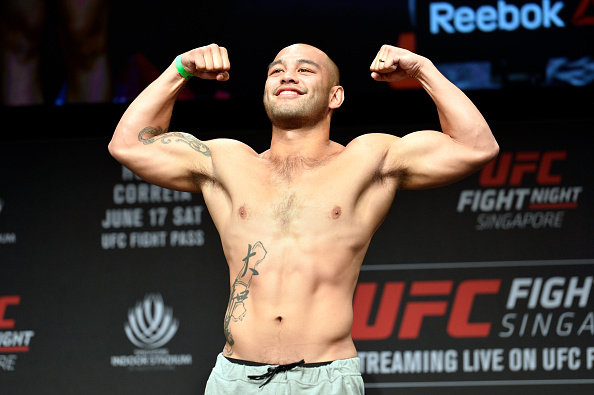 And coming from a culture that not only accepts fighting but embraces it doesn’t hurt either.

“Growing up on an island, you're going to grow up fighting,” Camacho said. “For that reason, MMA is huge. Maybe the history of the islands being colonized by the Spanish and the Japanese, there's always been so much outside influence. Regardless, MMA is huge. I was thinking about it the other day and it's one of the only sports on the island that the community is going to come out and pay to watch. It's really entertaining, and it's a part of our warrior spirit. It resonates with everyone on the island, which I think is why it's such a popular sport. Popularity-wise, it's probably in the top three.”

It will likely make a move up in popularity should the hard-hitting Camacho make an immediate impact in the Octagon. That’s the plan now, and it was back in 2012 as well, when he took a shot at The Ultimate Fighter 16. Unfortunately, Camacho ran into current welterweight contender Neil Magny and was eliminated before getting into the house. It’s been a long five years since.

“It's really been a roller coaster,” he said. “If anything, I have to thank him (Magny) for that fight because it really taught me a lot - mentally, spiritually, and physically. If you look at my career, I went on hiatus for a few years so I could just focus on getting better. My career has had its ups and downs, too - some really good wins and a stupid loss, a couple really good wins and another stupid loss. It's really been a roller coaster. This is a perfect time for me to make my UFC debut.”

Why? Well, he’s sailed through some rough waters, got experience, made it to the big show, and all before his 29th birthday. Not bad, Mr. Camacho, not bad at all.

“It's something that I've always dreamed about, and I think it's coming together at the perfect time,” he said. “I'm at an age where I've got a few more years in the game, so I've got a lot of time to build on the experience I've already gotten in nearly 25 pro fights; I'm getting better every day and I think I perform better with each and every outing.”