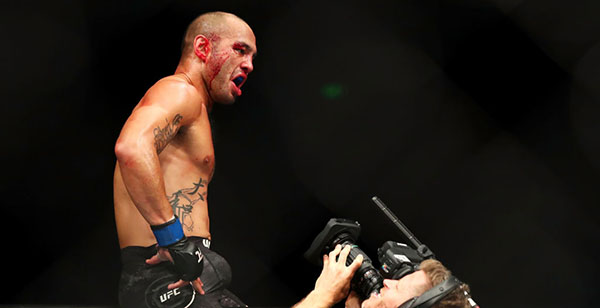 If you’ve ever watched Frank Camacho fight, you may laugh when you read this, but the welterweight from Saipan is sincere when he says, “I hate confrontation.”

And yeah, he laughed too, knowing that someone who has earned Fight of the Night awards for his first two thrilling brawls with Jingliang Li and Damien Brown isn’t going to convince too many people that he’s the shy and retiring type when he’s got gloves on and a gumshield in his mouth.

“I’m in a sport where everything is about confrontation, and maybe that’s my outlet,” he said. “It’s so weird.” 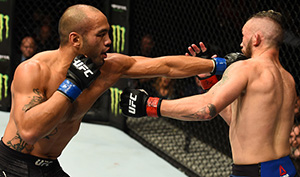 Outside the Octagon, though, the 28-year-old is a laid-back and affable husband and father who just likes to get into fistfights every few months. A lot of people think that’s something for them, but only the ones who have dedicated their lives to the craft of mixed martial arts can do it for a living. And just a few years ago, Camacho wondered if that was still a viable goal.

That doesn’t mean his mom has to like it. And she doesn’t, only getting to one of Camacho’s early bouts…briefly.

“She attempted to watch a fight live – my second fight, I was only 16,” he said. “But when the fight was about to start, she ran outside and was yelling at the ambulance and fire crew, telling them they better be ready and better not eat or go anywhere.”

Camacho laughs, knowing that it’s a mother’s love and concern that keeps her away from the arena but still invested in her son’s fights. 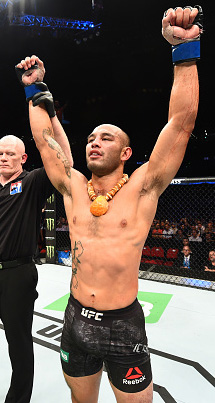 “She rounds up all the aunts, and they go to church and they say prayers for me,” Camacho said. “But my mom would never watch a fight.”

If we’re talking about seeing a son grit his teeth and put himself through a grueling 15-minute war like Camacho has done with Li and Brown, well maybe that’s a good call. But for the rest of us that love the fight game, “The Crank” has turned into must-see TV in the space of two fights.

“It’s really nice and it’s so cool for the UFC and the fans to really appreciate the heart and the passion I put into the game and into every fight,” said Camacho, a pro since 2005 who lost a close decision to Li last June before evening his UFC slate with a split decision victory over Brown in November. It was an emotional victory for a fighter who has proved that leaving it all in the Octagon isn’t a snappy soundbite, but his mantra, and we saw it against the tough Aussie.

“Briefly at the end of the second, we kind of stopped and I don’t know why I growled at him, but it was kind of like we were getting there,” he laughs. “And then the round ended. It happened again in the third, we were about 30 seconds out and I was a little winded at the end of the round, but I kept coming forward because the game plan was to keep getting in his face and this guy was not shooting and not trying to clinch – he was just trying to throw, and I was like, ‘all right.’ We dug down deep and just kept going.”

The excitement level in Camacho’s voice rises when he talks about the art of the battle, and the way he sees it, he’s just carrying on what his coach has told him, that “Pressure is a privilege, so you have to embrace it.”

Saturday, Camacho will embrace it once again. Sure, he would like to get a finish and leave the judges out of the equation, but the odds are good that once he gets hit by Dober, it will be a signal for him to go back into the trenches and throw. That’s good enough for him, because as cliché as it sounds, Camacho is living the dream.

“On a personal, regular life level, now I’m able to do what I love and do it full-time,” he said. “On a career, martial arts level, I’ve learned so much as a martial artist and I can’t wait to implement it for this next fight. I’m really enjoying the ride and the opportunity and living it by the day.”