Cynthia Calvillo has already been warned. As soon as the strawweight contender finishes her Sunday co-main event bout with Joanne Calderwood, she will not be welcome in the Ultimate Fitness gym for a month.

It’s not like the 30-year-old has done anything wrong. But Team Alpha Male coach Justin Buchholz does want his fighter to take a little break after a hectic schedule that will have seen her fight six bouts in a year’s time by the time the Calderwood bout is over.

Those six bouts constitute Calvillo’s entire pro MMA career, a whirlwind ride that has taken her from her pro debut to the No. 14 spot in the 115-pound rankings. 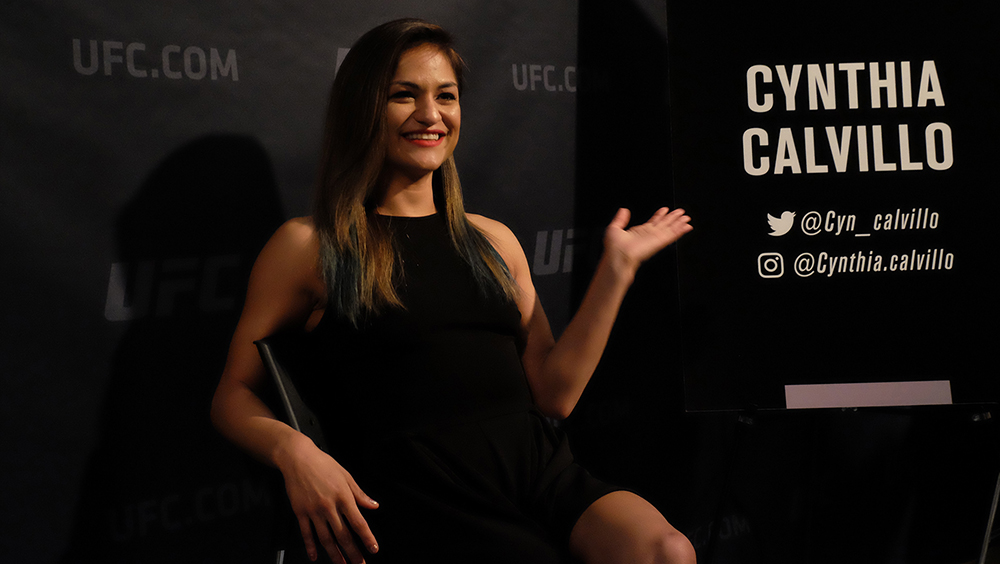 Calvillo was one of the sport’s top prospects as an amateur, as she went 5-1 with three finishes from 2012 to 2014. Then disaster struck when she broke her forearm three times over the next year. After the final break in August 2015, she decided to take the proper time to heal, and in August of last year she made her pro debut. Three wins later, Calvillo was in the UFC, and in March and April of this year, she soared to 2-0 in the Octagon with submissions of Amanda Cooper and Pearl Gonzalez.

That brings us to the No. 8-ranked Calderwood, and Calvillo still doesn’t plan on taking much time off before her next fight.

“If I come out good out of this next fight, I’m looking at October-November,” she said. “I want to keep it going and I want to take the opportunities because there’s no such thing as the perfect time. Injuries come and I had to sit out for almost three years and just watch everybody go out there and do this while I couldn’t do it. It was so hard and I hated it. So as long as I’m healthy, I’m gonna keep training, keep fighting and I’m gonna become a world champion. I’m not taking this for granted by any means.”

At the rate she’s going, Calvillo might be fighting for that world title sooner, rather than later. And yeah, she’s got that title fight mapped out already.

Her kind of schedule makes Donald Cerrone look like a slacker, and the good part is that the ever-smiling Californian seems like she’s enjoying every moment of this time.

“My jiu-jitsu coach Fabio (Prado) always says, ‘Enjoy life,’” Calvillo said. “You work so hard and the day has finally come where you can showcase all the progress you made from all the hard work you put in, and you can’t take it for granted. I’m blessed and to be able to do something like this, it’s amazing. I have to live in the moment and I have to enjoy it.

“It’s exceeded my expectations as far as how fast everything has been moving and the position that I’ve been put in on the fast track,” she continues. “I have a journal that I write in, and it’s crazy how fast I went through all the goals that I set and wanted to accomplish this year. It’s been great, I’m embracing it, and it’s been an amazing journey, but I’m focused and ready to keep it going. I know this is where I belong and what I’m supposed to do.”

But what about that month-long ban from the gym?

“I told myself after this fight I’m just gonna do a month of yoga.”