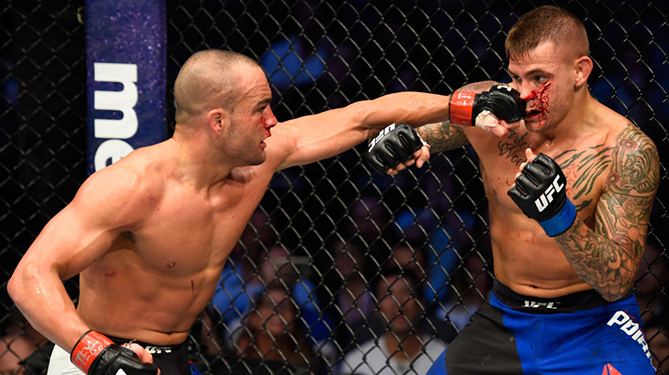 Eddie Alvarez punches Dustin Poirier in their lightweight fight during the UFC 211 event at the American Airlines Center on May 13, 2017 in Dallas, Texas. (Photo by Josh Hedges/Zuffa LLC/Zuffa LLC via Getty Images)" align="center" />EDDIE ALVAREZ VS DUSTIN POIRIER
You could give me an Eddie Alvarez-Dustin Poirier-Justin Gaethje round-robin tournament for the championship of each other over and over again and I’d be fine with that. Simply put, these are the fighters that draw people into the sport and keep them here. So after Alvarez-Gaethje and Poirier-Gaethje closed out the first season of Lightweight Explosion (no, I don’t have a better name), season two starts with Alvarez and Poirier breaking their tie after a season one no contest. So who wins? I have no idea, but it’s going to be good and it’s going to be the kind of fight that will probably demand a third meeting, maybe that one after Saturday’s winner gets a world title shot.

JOSE ALDO VS JEREMY STEPHENS
Very intriguing stuff at 145 pounds when Brazilian star Jose Aldo faces Jeremy Stephens. Aldo is arguably the greatest featherweight of all-time, but is he on the downside of his career after two losses to Max Holloway? If he is, he’s facing the wrong guy at the wrong time, because Jeremy Stephens has weathered the ups and downs of the fight game to show the best form of his career as of late. But I always like to think the great ones have one great fight left in them, and maybe Saturday’s the night for Aldo because while Holloway is death by a thousand cuts, Stephens is a walk-off homer kind of guy, and if Aldo can peck and poke at him with leg kicks and quick combos upstairs, he may be able to avoid those home run swings from the “Lil’ Heathen” for 15 minutes.

JOANNA JEDRZEJCZYK VS TECIA TORRES
It’s former strawweight champion Joanna Jedrzejczyk’s first non-title fight since 2014, and while many are wondering how she’ll react after two losses to current titleholder Rose Namajunas, the three-round distance may be a benefit for Jedrzejczyk against Tecia Torres because she’ll be able to let her hands go and push a fast pace against the equally active “Tiny Tornado.” And in a firefight, it’s hard to pick against the former champion.

ALEXANDER HERNANDEZ VS OLIVIER AUBIN-MERCIER
If you can honestly say that you saw Alexander Hernandez coming and saw him knocking out Beneil Dariush in less than a minute, you’re a better fan than I am because it shocked the heck out of me. But now that he’s here, I can’t want to see what the Texan does next, and if he can deliver a similarly spectacular win over surging Olivier Aubin-Mercier, the title picture may be Hernandez’ fate sooner rather than later.

JORDAN MEIN VS ALEX MORONO
I see a lot of similarities between Jordan Mein and Alex Morono in terms of their well-round skill sets, aggressiveness and willingness to take risks to go for the finish. That means one of two things on Saturday – either this will be a war of nerves and a chess match, or a Fight of the Night candidate. I’m guessing with Mein fighting in his home province and Morono looking to add a big name to his resume, it’s going to be the latter.

KAJAN JOHNSON VS ISLAM MAKHACHEV
A good scrap at 155 pounds between Kajan Johnson and Islam Makhachev. Johnson is a survivor, the kind of fighter who will use whatever he’s got in his tool box to get the win. That can mean a tactical three-round decision or a spectacular knockout. So what will he have to do to beat rising star Islam Makhachev? Probably a little bit of everything, because Makhachev will be bringing the heat for all 15 minutes.

HAKEEM DAWODU VS AUSTIN ARNETT
An impressive striker from Calgary, Hakeen Dawodu didn’t get to show off his skill set in a quick submission loss to Danny Henry in his UFC debut, but he’s hoping that with the home crowd behind him and an opponent in Austin Arnett who is a better stylistic matchup, he can show the world just what “Mean Hakeem” is all about.

GADZHIMURAD ANTIGULOV VS ION CUTELABA
Ion Cutelaba is on my short list of fighters who deserve more attention (a list headed by Elizeu Zaleski Dos Santos) because he’s a monster on fight night who really shows up to knock someone’s head off their shoulders. But he’s got a tough style matchup with Gadzhimurad Antigulov, the kind of guy who will duck Cutelaba’s bombs, secure a takedown, and then do whatever it takes to get the W.

JOHN MAKDESSI VS ROSS PEARSON
Two lightweight vets square off, as John Makdessi faces Ross Pearson. “The Real Deal” snapped a four-fight losing streak with a much needed win over Mizuto Hirota in February, pumping new life into this career, but Makdessi – who is coming off a victory over Abel Trujillo in December – feels better than ever training with the Roufusport squad, making this one a pick ‘em matchup. 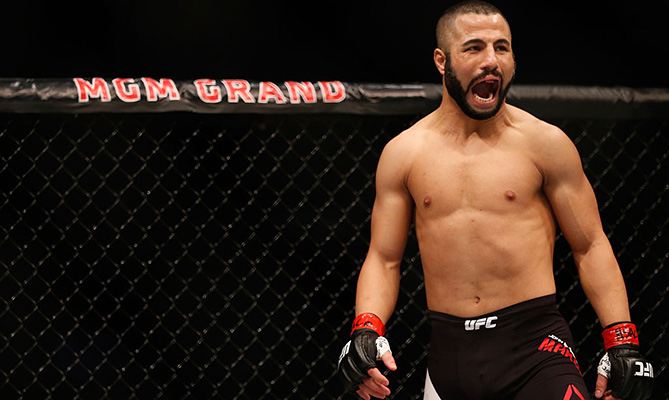 ALEXIS DAVIS VS KATLYN CHOOKAGIAN
It’s no surprise that two of the most soft-spoken flyweights in the world are meeting in Calgary this weekend. Neither Alexis Davis nor Katlyn Chookagian go in for trash talk or making a lot of noise, so they haven’t skyrocketed up the ranks like some fighters have. What they do, though, is fight at an elite level, and the winner of this one will get noticed at 125 pounds for sure.

DUSTIN ORTIZ VS MATHEUS NICOLAU
Brazil’s Matheus Nicolau is a talented up and comer who is seemingly the future at 125 pounds. But man, Dustin Ortiz loves fighting and beating guys with that description next to their name: Ray Borg, Justin Scoggins, Hector Sandoval, Alexandre Pantoja. Yeah, Nicolau is good, but don’t sleep on Ortiz.

RANDA MARKOS VS NINA ANSAROFF
Randa Markos and Nina Ansaroff have reached the point in their UFC run where it’s time to either make that move up the strawweight ladder or remain with the rest of the pack. Subsequently, I expect an intense battle at 115 pounds that will go down to the wire.

DEVIN POWELL VS ALVARO HERRERA
Devin Powell has had a tough go in his first two UFC bouts, losing decisions to Drakkar Klose and Darrell Horcher, but it seems like he’s getting closer to a breakthrough, and he needs that breakthrough to happen on Saturday night against Mexico’s Alvaro Herrera, who is making his first start since August of last year.