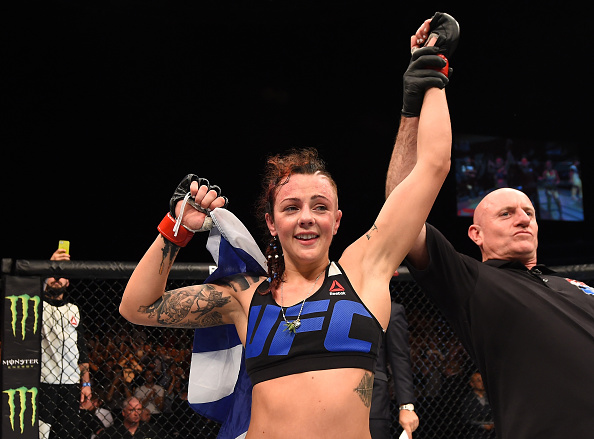 In a sport that can be merciless, moments of pure beauty materialize every now and again. Such was the case when Joanne Calderwood battled back from adversity in Glasgow, Scotland and took the win, as well as Fight of the Night honors, in front of her home crowd at UFC Fight Night: Bisping vs. Leites.

Two years later, almost to the day, “JoJo” will take to the cage once again inside Glasgow’s SSE Hydro this weekend at UFC Fight Night: Nelson vs. Ponzinibbio. And despite having stepped into the cage everywhere from Las Vegas to New Delhi over the course of her career, the Kilmarnock native keeps a special place in her heart for a home crowd.

“It’s great to travel and to fight in various places, but nothing beats home,” Calderwood said. “Everyone gets behind you and supports you on that walk. I can’t wait for Sunday night.”

Waiting inside the Octagon in the blue corner will be Cynthia Calvillo. Should you not be familiar with the Sacramento, California native, you’re in good company.

“I only knew her once we were matched up,” Calderwood admitted regarding the UFC rookie who made her debut at UFC 209 in March.

Five fights into her professional career, Calvillo has now made the long trip across the pond to take out Calderwood in front of her own people and bring the hype to a new level. Or to get sent back to California with her first professional loss in the bag.

“She’s exciting, she’s a great fighter and she’s got a lot of hype behind her,” Calderwood acknowledged. “I’m looking forward to the challenge but I also know that she hasn’t fought anyone like me. The hype won’t change anything when we’re in there on Sunday.”

“I met her in Dallas for the first time at the [Summer Kickoff] press conference in May. But I’m not here to make friends or to get to know their personality. I know that in the Octagon, we’ll both try to take each other out and take the win. Once I’m in the zone, it doesn’t make a difference.”

Scheduled for the co-main event this weekend, Calderwood will try to make good on what she had hoped to accomplish last year: a run at a UFC belt. She just isn’t sure yet which one it will be.

“It was very frustrating for me,” Calderwood said, remembering the guillotine choke that catapulted Andrade into a title shot and shredded her own hopes for gold. “But I learned a lot of lessons that night – I think (the defeat) was meant to be. I’m still getting there.”

One of the lessons Calderwood learned was that running fight camps back to back is not a good idea at the top of the game.

“(I want to fight frequently) as long as I’m getting better, but last year it was too rushed to fight twice in three months. I guess maybe the UFC wanted to carry on the momentum (of the Letourneau win) and push me towards the top. But three months was too short. In hindsight, I think I shouldn’t have taken that fight.

“I do want to fight as much as I can. I’d like to fight every month, but when you’re fighting the best and you’ve got aspirations to fight for titles, then you have to hold yourself back a little bit in that regard sometimes.”

Another thing that bothers Calderwood is the cut to the 115-pound strawweight limit. Having fought Letourneau one division up at flyweight, Calderwood hopes to become a part of the UFC’s newest weight class once it’s open for business later this year. Cutting ten pounds less would’ve likely spared her another uncomfortable experience at UFC 203.

“I had a sore stomach from cutting weight. I didn’t feel so good but of course the loss was caused by technical mistakes. I had to take a loss but it’s a learning game.”

Aiming to make the most of a miserable situation, Calderwood can count on the support of competent coaches to make that goal a reality. The Scot is a regular guest at both Tristar Gym in Montreal, Quebec, Canada and at the high-end facility of Mjölnir MMA in Reykjavík, Iceland.

“(Tristar head coach) Firas Zahabi definitely helped me analyze the loss,” Calderwood said. “He’s an awesome coach. He’s so knowledgeable and he doesn’t just tell you what you did wrong, he shows it to you right on the mat. He’s always on the mats, rolling.”

“I’ve always traveled to Iceland, even when I was still training (full-time) in Scotland. I’ve got good training partners there and it’s an amazing complex. It’s one of the best in the world in MMA and I’ll continue to go there in the future, for sure.”

With passion, technique and the support of 10,000 compatriots, Calderwood will be looking to put what she’s learned since September into practice this weekend. For herself, her teams and the fans who will be cheering the Thai boxing expert on against the American grappler.

“They’re going to see a good fight between two exciting fighters. I’m going to try to keep it standing and do what I do. I’m looking forward to Sunday.”