Calderwood And Chookagian To Start Things Off At UFC 238

Joanne Calderwood And Katlyn Cookagian Are Readty To Give The Fans A Top Ranked Flyweight Battle To Start The Card Off
By Zac Pacleb • Jun. 6, 2019

The general consensus is: the bigger and more notable a fight and its fighters are, the later it takes place in the fight card, so when Joanne Calderwood and Katlyn Chookagian saw they were opening the show at UFC 238, they were a little surprised.

Even so, both fighters are looking at the positives of fighting on the early prelims on UFC FIGHT PASS.

“If I’m the first fight or on the main card, I don’t get paid any different,” Chookagian said. “Might as well just get it over with, relax. I have time to get my fight, win, relax, eat some pizza, and then watch my teammate Marlon win, so I’d rather just get it over with. The sooner, the better.”

The fight likely determines who will take on whomever wins the co-main event between Valentina Shevchenko and Jessica Eye for the flyweight title, so any irregularities in the circumstances around the night’s opener won’t hold as a good excuse for losing.

Naturally, both fighters are looking at the positives of the situation: namely, the fight is taking place around the time they usually workout anyway instead of later in the night when they admittedly would like to go to sleep.

“That works better for me because, typically, for me, I like to train mornings and afternoons,” Chookagian said. “I don’t really train at night. I like to go to bed early. I’m a little bit like a grandma there.”

Where the environment of the fight will seem different is in the crowd. Because the fight takes place so early, it’s common for fans to still be trickling into the arena and not fully form its voice until just before the main card. It caused the athletes to call back to when they fought in smaller promotions and early in their UFC careers. 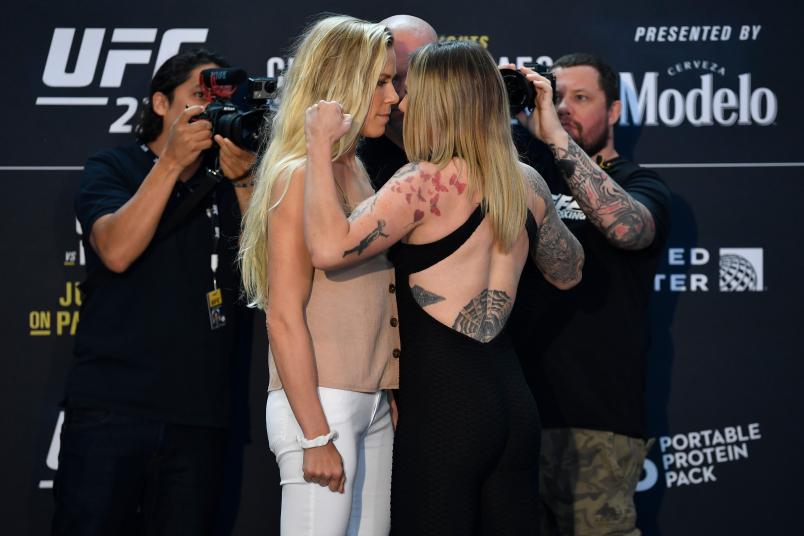 CHICAGO, IL - JUNE 06: (L-R) Katlyn Chookagian and Joanne Calderwood of Scotland face off for the media during the UFC 238 Ultimate Media Day at the United Center on June 6, 2019 in Chicago, Illinois. (Photo by Jeff Bottari/Zuffa LLC/Zuffa LLC via Getty I

On top of that, it’ll make life a little easier on the coaches in their corner, not having to shout over the buzz in a likely smaller crowd.

“The only person that I want to be there is my coach so that I can hear him in the corner,” Calderwood said. “That will be even better because I will be able to hear him if there’s not very many people there. And also, my mom is coming, so I’m sure I’ll hear her as well.”

A fight of this caliber opening the fight card should urge any UFC fan to tune in early or get to United Center right away. The implications are major, the athletes are locked in and the stylistic matchup shapes up to be one that could mix in a good variety of techniques.