Caio Borralho Was Born For This

If you’ve been lucky enough to see a UFC event live in person, you already know that it’s an unparalleled live sports experience, particularly when it’s your first time. Caio Borralho is amongst some of the most recent folks to have that experience, despite being a UFC fighter himself.

What a night last night was!!! First time watching UFC in a arena and I got emotional and goosebumps!!! Until the end of the year I will fight in front of a crowd like that…mark my words!

“What a night last night was!!! First time watching UFC in a arena and I got emotional and goosebumps!!! Until the end of the year I will fight in front of a crowd like that…mark my words!”

Borralho’s second UFC contest this Saturday versus Armen Petrosyan at UFC Fight Night: Dos Anjos vs Fiziev will mark his fourth consecutive bout at the UFC APEX. Dating back to his two appearances on the 2021 season of Dana White’s Contender Series, the intimate Las Vegas venue that holds but a handful of fans has become Borralho’s home outside of São Luís, Brazil. But after this Saturday, he might be looking to move.

“It was amazing, man,” he recalls. “The energy and the crowd inside the arena was just amazing. I got very emotional when I got in the arena because I had pictured myself fighting there. I made a promise to myself that, in the name of Jesus, I'd be fighting there until the end of the year. I was really happy, full of energy. Jim Miller's family was behind me, so when he won, everybody got emotional. It was a moment I will always remember and that I'll talk about for a long time.

“When I pictured myself fighting in the UFC, it was never without a crowd. That happened because of everything that's been going on in the world. But I was born for this. I was born for big audiences and to have that connection with them. I was born to be on the big stage.”

He actually loves the APEX, and for good reason: all three tilts there have gone in his favor. His defeat of Aaron Jeffery in his first DWCS stint didn’t secure the contract, but it secured the interest of Dana White and the matchmakers who brought him back to the show three weeks later. In his first round TKO of Jesse Murray, he won that coveted contract, which he then parlayed into his first UFC win last April over Gadzhi Omargadzhiev. The venue’s good fortune continues for him Saturday, where his judo and jiu-jitsu-based skillset are set to be featured in the co-main event.

“That means that the UFC is expecting a lot from me,” he remarks of the high card placement; his second co-main in as many fights. “I hope I can rise to the occasion. I've been training very hard to put on a great show for everyone, to make the UFC see that I'm a valuable product to the company and that it's worth investing in me.

He’ll aim to show that investment potential against Petrosyan, who, like Borralho, won his contract on Contender Series last season and has already notched a victory in the UFC. Despite his reputation as knockout artist, Borralho doesn’t sound terribly concerned. 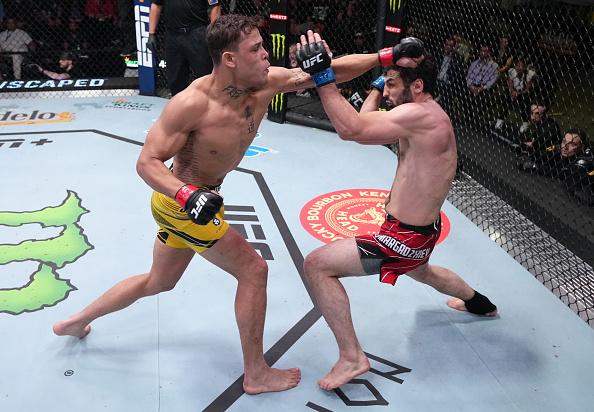 Caio Borralho of Brazil punches Gadzhi Omargadzhiev of Russia in a middleweight fight during the UFC Fight Night event at UFC APEX on April 16, 2022 in Las Vegas, Nevada. (Photo by Jeff Bottari/Zuffa LLC)

“He's a kickboxing world champion. He has a lot of experience on the feet. Six of his seven wins were by knockout. He is dangerous, but we're talking about MMA. And in MMA, he's a one-dimensional fighter. I wouldn't say it will be easy, but it will be simpler to read him because he'll only want to throw kicks or punches. That's the only thing he'll want to do. He won't want to take me down. He won't want to fight jiu-Jitsu or wrestle. He'll want to strike, and I can fight well anywhere. If I have to strike, I'll strike. If I have to take it to the ground, I can take it to the ground. If I have to use my jiu-jitsu, I'm a jiu-jitsu black belt.”

He says it won’t be easy, but when he explains it like that, he can’t help but make it sound easy.

“When I saw he got the contract [on Contender Series], I patted him on the shoulder and congratulated him. It was actually funny because Dana White loved him. He liked my performance, said good things, but when he talked about Petrosyan, he was just so excited. Now I have the opportunity to show him and beat this guy. It's another challenge and I want to prove to everybody that I'm the best product in this organization.” 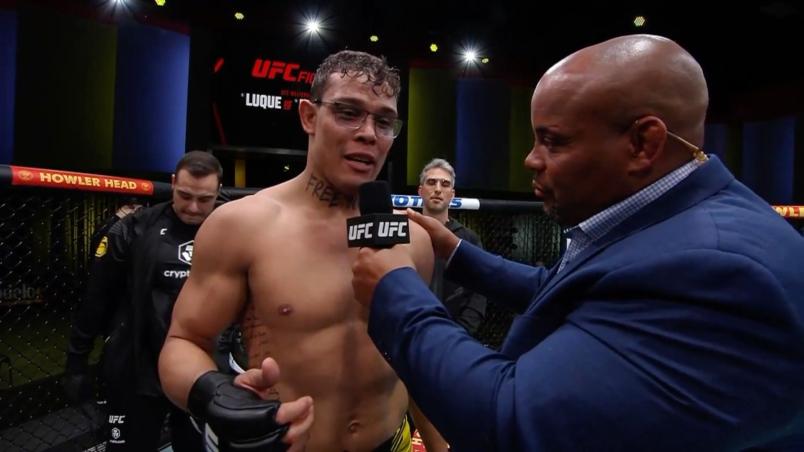 Whether he’s the best remains to be seen, but there is an undeniable vibe that seems to travel along with Borralho wherever he goes. His media requests increase seemingly by the hour. Long gone are the days of sitting in his hotel during fight week playing video games. His social media following has grown exponentially seemingly overnight. All signs are pointing to a bright future, and Borralho is as excited as anyone to see where it leads.

“I don't like to think ahead, man. I never did. I have names that I want to call out. It's a strategy for after the fight, after the win. But I try to live in the present as much as I can.

“I see a lot of fighters saying who they want to fight in the future while they haven't even fought yet. And I don't want to make the same mistake as these fighters, so I'm focused on Armen, on the present. First I have to win this fight and then I'll look ahead.”