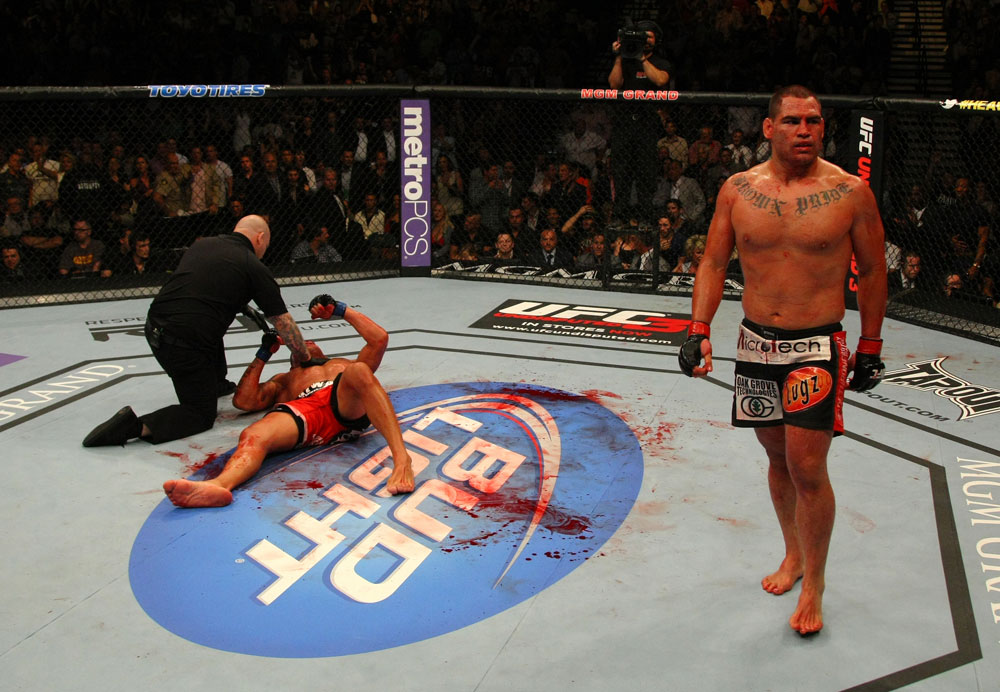 He’s been to the top of the heavyweight mountain, and on Saturday, December 29, Cain Velasquez gets the opportunity to get there a second time when he faces the man who took his title, Junior dos Santos. Before this highly-anticipated UFC 155 rematch takes place, let’s look back at how Velasquez got here.

UFC 83 - TKO1 Brad Morris
If you had the opportunity to speak to the American Kickboxing Academy’s Javier Mendez back in 2006, you probably would have heard about Cain Velasquez two years before his UFC debut, and not just because he was a two-time All-American wrestler at Arizona State, but because he was the Next Big Thing in the sport. It was a lot to throw on the shoulders of the soft-spoken Velasquez, but when he entered the Octagon in his third pro fight to face Brad Morris, he fought like he had been here for years, stopping his foe in 2:10 before a packed house at Montreal’s Bell Centre. Big fights, big crowds? They would soon become routine for Mr. Velasquez.

UFC 99 - W3 Cheick Kongo
Though it’s gotten lost in the shuffle of his spectacular knockouts of Minotauro Nogueira and Brock Lesnar, the fight where Cain Velasquez grew up was against French striker Cheick Kongo. The decision read 30-27 across the board for Velasquez, but before he got to that point he had to pick himself up off the canvas after eating some hellacious shots from Kongo. But as we saw that night, when hurt, Velasquez was instinctively able to go back to what he knew best, and once he got Kongo to the mat, it was time to unload his ground strikes. On this night, you got the feeling Mendez was right – Velasquez was something special.

UFC 104 - TKO2 Ben Rothwell
Poor Ben Rothwell. The seasoned vet finally gets his call to the UFC, and who does he get to face first? Velasquez. And in California no less. So while the odds were stacked against “Big Ben,” Velasquez made everything that much worse with a second round TKO victory that kept his unbeaten record intact and set the stage for even bigger and better things in 2010.

UFC 110 - KO1 Minotauro Nogueira
Like Junior dos Santos’ respect for Mirko Cro Cop leading into their bout, Velasquez felt the same way about Antonio Rodrigo Nogueira. Yeah, he may not have been the same guy who won the PRIDE heavyweight title, but he was still Minotauro and still dangerous. So Velasquez did what you do the moment you see an opening against a dangerous opponent – you get him out of there. In the Acer Arena that afternoon in Sydney, you could hear the left hook that sent Nogueira down and out. That’s power.

UFC 121 - TKO1 Brock Lesnar
2010’s Velasquez vs. Lesnar bout had all the drama and all the question marks you want from a big time heavyweight championship bout, and while Lesnar provided the drama with an all-out assault on his challenger at the opening bell, Velasquez delivered the answers to all questions about being too small to beat a giant like Lesnar, as he knocked the big man out in the seconds round to become the UFC heavyweight champion of the world.

UFC on FOX 1 – KO by 1 Junior dos Santos
Anderson Silva. Royce Gracie. Fedor Emelianenko. Georges St-Pierre. Chuck Liddell. No one at the elite level of this sport gets out with a spotless record, and Cain Velasquez would be no exception to this rule. The man to pin this first defeat on him was Junior dos Santos, and while the result was a shocking one, Velasquez has moved on from the fight, so much so that he has a return date with “Cigano” coming up on December 29th.

UFC 146 – TKO1 Antonio Silva
After and fighter suffers his first loss, you wonder how he will respond in the next fight. In the case of Velasquez, it only took three minutes and 36 seconds to get that answer, as he looked more focused, determined, and intense than ever before in blasting out Antonio “Bigfoot” Silva in the first round. If there was any doubt about his ability to bounce back and soar right back up to the top of the heavyweight division, it was gone after this night in Vegas.