"When I go into a fight, my mentality is that it’s going to be a five
round fight, a five round war, and that’s what I picture every fight as." - Cain Velasquez 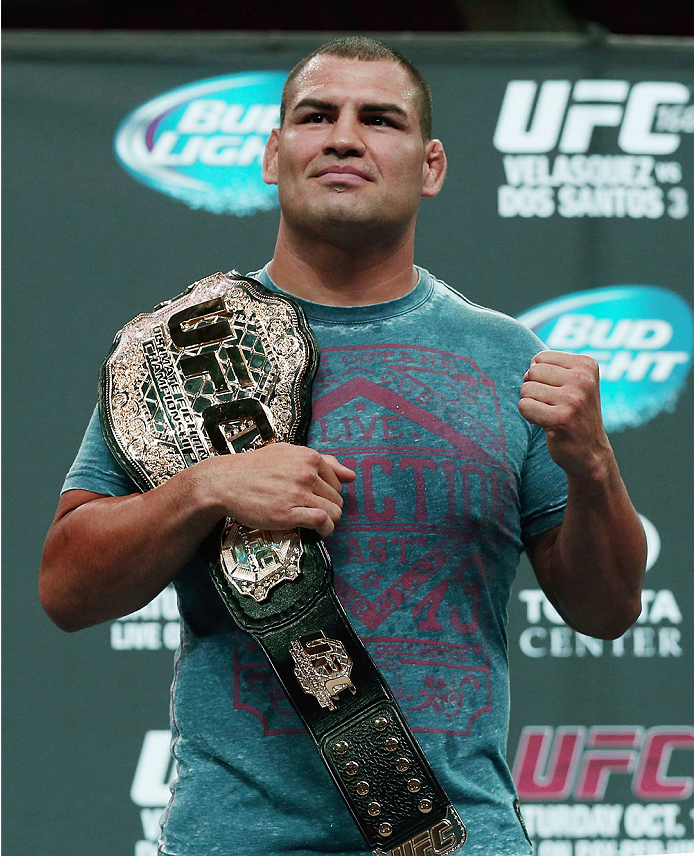 The text from an almost giddy Cain Velasquez went through to his father Efrain, but due to reception issues in the MGM Grand Garden Arena, the picture that accompanied it wouldn’t send.

“He was like ‘what are you talking about,’” laughed Velasquez. “So all during the fights I’m trying to send the picture and finally it did get sent.”

The picture was of the UFC heavyweight champion with boxing legend Julio Cesar Chavez. In the Velasquez household, when Mexico’s Chavez fought, the rest of the world stopped. So while having his son become the first Mexican-American fighter to win a major combat sports heavyweight title was a big deal, seeing him with Mexico’s “El Gran Campeon” on the night Saul “Canelo” Alvarez fought Floyd Mayweather last month had to be right up there on the importance meter.

“He was excited for me,” said Velasquez. “And it was a good surprise. We were supposed to meet him the day before at the weigh ins and it didn’t happen. So we’re walking into the arena, and one of the PR guys that I was with pulls him out of whatever he was doing. I was doing an interview, and all of a sudden he was there. I was at a loss for words, but it was cool and a great experience that I was able to meet one of my heroes growing up. It was a big thing for me.”

It’s probably as excited as you’ll hear the soft-spoken champion get. So I asked him if it makes him realize that when he meets his fans, they might have the same feelings he got when meeting Chavez.

“I don’t think of it like that, but if somebody does feel that way, if I can make their day then I’m happy to do it,” he said. “It’s the same way when I go out there and fight. If I can make somebody’s day I’m gonna do it to the best of my ability. I’m just thankful for what I’m doing here and I’m just gonna try and keep it going.”

Defending his title this Saturday for the second time in his second reign as champion, Velasquez has settled into life at the top. On his way to the title and even during his first reign at the top, the Californian appeared to be in a constant state of adjustment to the spotlight. Not only did he have to be the UFC’s representative as heavyweight champion, but he also was the go to guy for press gatherings in Mexico and with the Hispanic media. For a private family man like Velasquez, it was something that took getting used to. Today though, he seems to be as much at ease in front of the camera as he is in the Octagon, and he has come to embrace his role as an ambassador of the sport.

“I’m getting used to it,” he said. “I think with every fight I’ve got more and more (attention), and I’ve gotten used to it, and I know now that it’s part of the job, so I’ll do it.”

The biggest part of his job is what happens on Saturday night though, and as he comes to the third fight of his trilogy with the man he has traded wins with, Junior Dos Santos, it’s an opportunity to close this chapter of his career and move forward. And while it was expected that after the two went 1-1 in their first two bouts that a third fight would be inevitable, the one-sided nature of the last fight - a five round decision win by Velasquez last December – made many think that the third one would have to marinate a bit before taking place.

“I kind of knew,” said Velasquez if he thought the rubber match would happen so soon after his dominant win last year. “After the second fight he had to look good against Mark Hunt (in May), and with that, I knew that I would fight him again. So I was getting ready for it. It’s also a thing of hey, whatever the UFC says, whatever opponent they give me, I’ll be ready for it, but I kinda did think that this would happen that fast.”

JDS did look good against Hunt, knocking out the veteran in the third round on the same night Velasquez successfully defended his crown with a first round stoppage of Antonio “Bigfoot” Silva. All the third fight needed was a place and a date, and it got it this Saturday in Houston’s Toyota Center. Once that was in place, it was time for the two best heavyweights in the sport to get down to game planning. For Dos Santos, the plan is easy: don’t get taken down and try to land the same punch that knocked Velasquez out in their first fight in November of 2011. For the champion, the plan is a little more difficult considering that he fought a nearly perfect fight the last time. But the “nearly” part of that statement is what keeps him hungry.

“I always watch film, and even the film of the second one, I watched it a bunch of times with Javier Mendez and we always pick out different stuff that we could have done better and improved on in that fight,” he said. “So our game plan is the same – we’re using the same style of fighting and we’re doing everything. We’re standing up with him, we’re going to the ground, and we’re looking for everything in this fight. But we’re trying to get better in all aspects – on the ground, on our feet, and with how I throw my punches.”

Yet while the plan remains the same for Velasquez, and likely for Dos Santos as well, the winner may be determined by who has the stronger mental game on fight night. Velasquez knows what it’s like to be knocked out by JDS, but he can always chalk that up to simply getting caught. Dos Santos may have a tougher psychological hill to climb after the 25 minutes of punishment he took. Ask Velasquez which kind of loss is worse to deal with, and the answer won’t surprise you.

“I think what happened to him was worse for sure,” he said. “But I think in the back of his head he thinks that if he lands that good punch, it could all be over. So I have to be a hundred percent ready going in, I have to be on point, I have to be sharp, and I will be.”

And despite his one-sided win in the rematch, Velasquez has plenty of respect for his rival and his toughness.

It’s an attitude Chavez would be proud of, and one Velasquez believes is necessary for him to succeed, if only because he never wants to go back to feeling like a fighter without the title “champion” next to his name.

“I still have those feelings of when I lost it in the back of my head and those are feelings I don’t want to go back to ever again,” he said. “I know what I want in this life and in this sport, and I’m going to keep working hard to keep it.”