Cain Velasquez and The Night He's Waited a Year For

"I have to have a sense of urgency in the ring and fight with a purpose. That’s my style of fighting, but that night I didn’t show it, so this time I’m gonna show it and take this fight to him." - Cain Velasquez 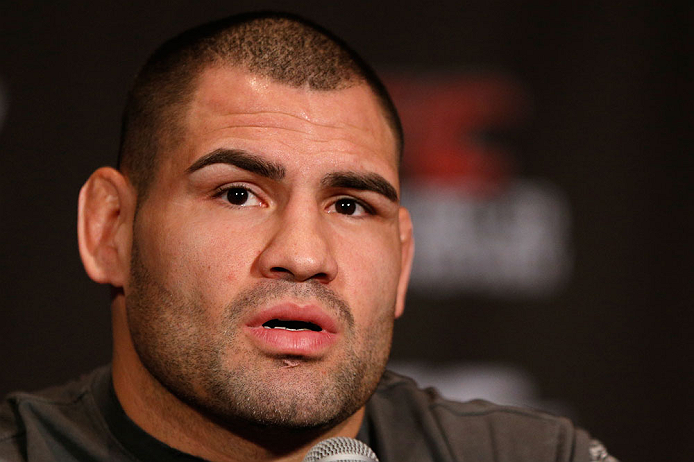 Life hasn’t been quiet for Cain Velasquez in a long time, not by a long shot. It’s the price to pay for being one of the best heavyweight mixed martial artists on the planet and the first Mexican-American fighter to win a major title in combat sports’ glamour division.

Yet all told, he’s handled it well, with a quiet grace that you don’t get to witness too often at the highest levels of professional sports. And that can’t be easy, especially given that in every interview he’s given since November 12, 2011, he’s had to re-live the worst night of his professional career, a 64 second knockout loss to Junior dos Santos that cost him his UFC heavyweight crown.

That’s par for the course in this business, and Velasquez is well aware of that, answering each question as it comes, honestly yet with the taciturn style that’s become his trademark. Yet what keeps his sanity intact in the days and weeks leading up to Saturday’s rematch with dos Santos in the main event of UFC 155 in Las Vegas is the reality that when this is all over, he’s got two people who will be by his side no matter what the outcome of a prizefight is: his wife Michelle and daughter Coral.

“That’s the best thing,” said Velasquez. “It doesn’t matter what kind of day I’m having in the gym, what’s going on in the sport or whatever. As soon as I go home, it’s the best feeling you could have. All the love you get from your family, knowing that they’re always there, it’s just the best thing. It definitely keeps you grounded, it definitely keeps you focused, and there’s no BS. Family are the people that love you and are always around you.”

You would have guessed that Velasquez needed that support at home more than ever after the lone loss of his pro career, but the former Arizona State University wrestler didn’t go into a funk after the first dos Santos fight. In fact, as soon as it was over, you could see Velasquez going over what happened with longtime coach Javier Mendez in the Octagon.

“I knew what I did wrong, and I was telling him,” said Velasquez. “We both knew, and I right away took blame that it was me that failed, not you guys.”

When talking about the fight these days, the Californian doesn’t bring up the knee injury he suffered before the bout or try to take anything away from dos Santos’ win. But it was evident from the opening bell that the Velasquez who tore through the likes of Ben Rothwell, “Minotauro” Nogueira, and Brock Lesnar wasn’t the same one in the Octagon with “Cigano.”

“There was stuff in that whole fight that I really didn’t do,” he said. “I didn’t attack him, I didn’t really fight him at all. I threw a couple kicks, but I got way too comfortable and I really didn’t do anything. When we have a game plan going into a fight, we need to go in there and execute it and have a sense of urgency.”

Velasquez’ lack of aggression allowed dos Santos the range he needed to operate at his best, and with a single overhand right, he dropped the soon to be ex-champion and then finished him with ground strikes. It wasn’t the epic war most expected, but what turned out to be prophetic is the idea that these two heavyweights wouldn’t just meet one time. It was a question I posed to Velasquez before the first dos Santos fight, whether this could eventually become an Ali-Frazier type series, and while it was probably a foolish thing to ask before they even fought once, when the topic is broached again before fight two, the former champ admits that it was something he thought about before.

“Yeah,” he said. “He (dos Santos) is really good. His standup is definitely the best out of all the heavyweights in the UFC. Him being that tough, I can definitely see us fighting again. So that was in my head, yeah.”

It may be even more prevalent these days, with Velasquez knowing that if he regains his crown, a rubber match would almost have to be addressed in the future. But that’s a moot point unless he wins on Saturday, and to get back into the hunt, Velasquez had to prove that his loss was just a mere hiccup in his career. That opportunity came at UFC 146 in May, and he left no questions with a three minute, 36 second demolition of Antonio “Bigfoot” Silva which saw Velasquez fight with an aggression level amped up higher than we’ve seen.

And when he got Silva hurt and bloodied, he didn’t let him off the hook.

He finished it, watched dos Santos defend his title with a knockout of Frank Mir in that night’s main event, and waited for his rematch to be signed. Of course, it wouldn’t be the fight game without a little detour, and when dos Santos expressed a desire to fight the man who he was supposed to have fought at UFC 146, Alistair Overeem, Velasquez could have been pushed aside. But that didn’t happen, and Velasquez says he was never concerned that he was going to have to wait a little longer for his shot at redemption.

“It was kind of a thing, it wasn’t worry, it was just wait to see what happens,” he said. “That was it. I just thought like if he wants Alistair Overeem, that fight’s going to be in a while; he can fight me pretty soon. That’s what I was thinking.”

Pretty soon is now one day away. When asked if he has a short memory like most wrestlers say they do, he says “It (the first dos Santos fight) still sits with me. You don’t dwell on it, you don’t keep replaying it over and over in your head. You still get that feeling of hurt, but you definitely try to make the best out of that situation.”

He has. He hasn’t forgotten what happened that night, but he hasn’t let it weigh him down over the past year either. On Saturday, the first fight doesn’t even matter anymore. What matters is what he does in the next 25 minutes or less, and he’s not shy when it comes to sharing exactly what that is.

“I have to have a sense of urgency in the ring and fight with a purpose,” said Velasquez. “That’s my style of fighting, but that night I didn’t show it, so this time I’m gonna show it and take this fight to him.”

If he does it and wins, he will be the champion of the world again. That means life will be a lot louder than it is now, even though hearing that you’re the best heavyweight in the sport is a sound most could get used to. But that’s not why Cain Velasquez wants his belt back.