Cain Velasquez: All Focus, No Excuses 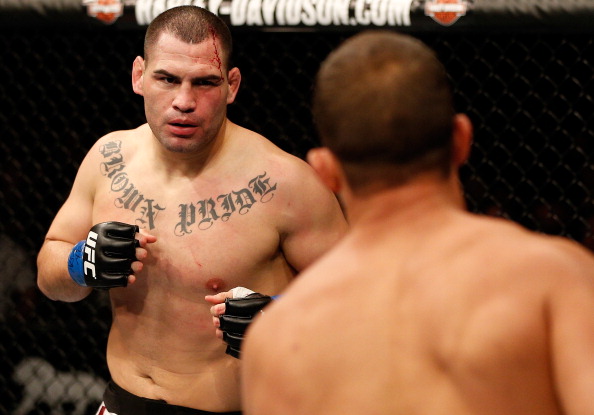 Coming out of his UFC 188 loss to Fabricio Werdum in June, the 33-year-old heavyweight liked the idea of getting back into the Octagon quickly and sharing the bill with his close friend and training partner Daniel Cormier, who headlined last weekend’s Pay-Per-View event at the Toyota Center, seemed like a logical fit.

But a phone call from UFC President Dana White prompted him to shift his plans.

“I came back and we heard about DC’s fight, so right away, I was training with him,” the former champion, who still made the trip to Houston to support his friend and take part in the UFC 192 Q&A, said. “I was looking at an October fight too – that’s what I wanted to do.

“I got a call from Dana and he says he wants me to fight (Fabricio) Werdum again and I said, ‘I’m happy to do that.’ He knows that I wanted to fight in October and he was wondering if I wanted to do that and if I didn’t want to wait and I was like, ‘No man – I want to wait for that fight; that’s the fight that I want.’”

The duo was initially scheduled to meet in the main event of UFC 180, the promotion’s inaugural event in Mexico City, but a little over three weeks before bout, Velasquez suffered a torn meniscus and sprained MCL in his right knee, forcing him from the contest. Werdum earned a stoppage win over fill-in Mark Hunt to claim the interim title, keeping the two combatants on a path to face off as expected.

After serving as coaches on the initial season of The Ultimate Fighter: Latin America, Velasquez and Werdum would meet in a title unification bout in Mexico City at UFC 188. It would be Velasquez’ first fight since finishing his trilogy with Junior Dos Santos, a span of 20 months.

While Werdum spent more than a month preparing in the thin air of the host city, Velasquez opted to spend most of his camp at home in San Jose, heading to Mexico City three weeks prior to fight night. From the outset of the fight, it was clear that the divergent approaches taken by the two heavyweights would be a factor.

Usually a cardio machine, Velasquez tired early, while the interim champion was able to maintain a quicker pace and high volume approach. The result was a third-round submission victory for the Brazilian and a painful learning experience for the American Kickboxing Academy heavyweight.

“I should have been prepared better, but I didn’t, so as far as that, it is what it is,” Velasquez said, refusing to dwell on his decision. “It was my first time fighting in that kind of altitude, so you learn from it and you move on. That’s pretty much it. For next time, if that ever happens again, I know what I have to do.”

Velasquez is taking a comparable “nothing I can do about it now” approach when it comes to the time he’s lost over the course of his career to injuries and talk about where he fits in the pantheon of great heavyweights to step into the Octagon.

When he ascended to the top of the division with a first-round drubbing of Brock Lesnar in October 2010, the Arizona State alum seemed poised to embark on a lengthy stay atop of the division. Doubling the record for most consecutive successful title defenses – which stands at two – didn’t seem unreasonable, but after staying relatively healthy throughout the early stages of his career, injuries have limited the talented heavyweight to just seven appearances in the last five years.

“As far as being more active, yeah, I’d like to be more active. As far as injuries, yeah, I would like to not have any injuries at all – I would love that too,” Velasquez laughed, clearly the strong silent type to Cormier’s vocal leader inside the AKA facility. “As far as that stuff and the future, no, I don’t (think about it at all). I just take my stuff day-by-day and as far as what my legacy is later, obviously that’s for the people to decide. The only thing I can do is give it my all when I go out there and fight and that’s pretty much it.

While his record could have a few more wins and the losses he incurred may not have happened without him spending extended periods of time on the sidelines, Velasquez has no interest in making such claims. In fact, he doesn’t even care at this point. All he cares about now is running it back with Werdum in 2016.

“Coulda, woulda, shoulda,” Velasquez shrugged when probed about how his career might look with a DeLorean ride back to before the injuries started mounting and stunted his ability to compete on a consistent basis. “Now I get a second opportunity to get it back, so that’s good for me. I’m down with that.”

Having won back-to-back championship bouts in Mexico City in events where the Mexican-American Velasquez was positioned to be the focal point of fight cards showcasing Latin American talent in the burgeoning new market, Werdum has been lobbying hard to bring the rematch to his hometown of Porto Alegre, Brazil.

Although a bout in his backyard doesn’t appear to be in the cards, rumors have the second meeting between these two heavyweight standouts still landing somewhere in Brazil in 2016, a scenario that is perfectly fine with the former titleholder.

“I’m cool with that,” Velasquez said, flashing a big smile as he admits that the potential to regain the title from Werdum on his home turf is very appealing to him. “That’s exactly where my mind’s at right now.

“I’m not sure what to expect from the fans there, but on the streets and everywhere else, Brazilian fans have been great – a lot of mutual respect back and forth – so I’m definitely excited for that.”