Read on for play-by-play of the heavyweight title main event between Cain Velasquez and Junior Dos Santos. 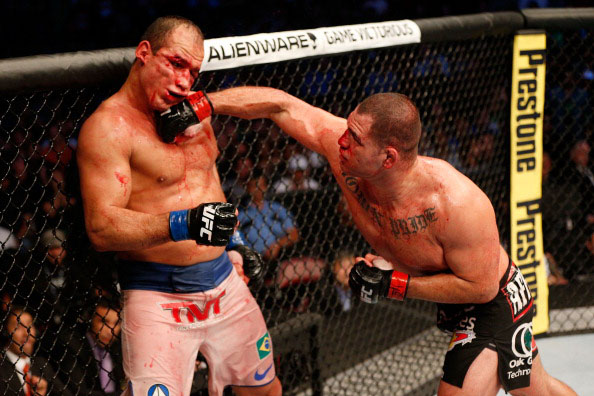 In the epic trilogy between heavyweight champion Cain Velasquez and former divisional king Junior Dos Santos, Velasquez tipped the series at UFC 166 to 2-1, winning 10 rounds over the course of 23 months to Dos Santos’ one , and defending his title with a fifth-round TKO.

Houston’s Toyota Center hosted the main event, its packed rafters firmly on the side of Mexican-American Velasquez. Their first fight ended in a 64-second knockout by Dos Santos; the second was a one-sided, five-round beating and takedown clinic by Velasquez. This one was closer to a standup-only version of the second with flashes of the first’s potential blasting throughout it.

The two – having come face-to-face in the center during Bruce Buffer’s introduction – wasted no time, and a left hand from Dos Santos in the opening seconds seemed to hurt the champion. But with 25 minutes of confidence behind him – and the added benefit of not coming off a knee injury, as he did in the first fight – Velasquez stayed standing, and in fact turned the momentum to get a takedown.

Round one had the most action, as Dos Santos freed himself and threw more in the center – including a high kick – as Velasquez worked to close space. From a bodylock on the fence, Velasquez threw Dos Santos to the canvas, and hit with elbows from half-guard. He briefly took Dos Santos’ back, then punished him with a knee to the body as Dos Santos stood. Though Dos Santos tried to make space, Velasquez was relentless against the links and kept much of the fight there, alternating knees and clinch pressure with more takedown threats.

But the trend was established by the second round, as Dos Santos’ clean jabs were answered by strikes from Velasquez, plus another knee and a leg sweep to the ground. Velasquez then teed off on Dos Santos against the fence, and though Dos Santos seemed unwavered by the shots and avoided most of the takedown attempts, he also had no answer for Velasquez’ pressure, who continued to stalk the former champion around the space. Pinning Dos Santos countless times against the fence, he damaged with fists, knees and the occasional footstop, always ready to throw in a takedown should “Cigano” shift off-balance.

Dos’ Santos’ strategy became more reckless as the fight wore on; he lobbed sloppy kicks and 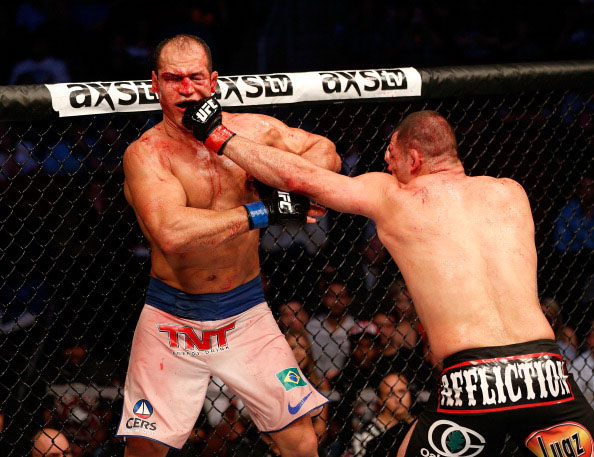 winged right hands from outer space. But none of them were a solution to the problem that was Velasquez, who answered back late in the third with a huge right that dropped Dos Santos. Shots on the ground from Velasquez had referee Herb Dean watching closely, and the arena lights even came on as if the fight were over. But Dos Santos somehow stayed in the game and returned to his feet, a sitting duck against the links, as Velasquez picked his shots until the round came to an end.

With blood in the water, Velasquez backed up Dos Santos immediately and did his bidding with hard shots to Dos Santos’ face, his right hands in particular carrying the weight of the championship. Dos Santos fired off a close elbow, but Velasquez gave back one of his own and then some. The damage called for a doctor to check on Dos Santos’ bleeding eyebrow and swollen eyelid in the fourth round, but the action was allowed to continue and Dos Santos still managed to throw some solid elbows from his spot against the cage.

Dos Santos swung for the fences as the crowd roared to open the final frame, and Velasquez quickly and easily got a takedown. The action then returned to its established position against the wall. Dos Santos signaled his exhaustion with a half-hearted strike when Velasquez made space, and so the champion rolled to the floor with the Brazilian in tow. Dos Santos turtled up and Herb Dean needed only a few follow-up punches to wave off the action at 3:09.

Velasquez’ record now stands at 13-1, with his 9 knockouts at heavyweight the most in UFC history. Those nine T/KOs now make him tied for third place in UFC history overall, behind only Anderson Silva and Chuck Liddell. Cigano departs 16-3, with his only UFC losses coming at the hands of AKA’s super-athlete Velasquez.