Caceres Determined to Rise above Perception

"I’m at an incredible level right now. I’m rising and I’m going to keep rising. I’m trying to make a 180 [degree] switch from what I was to what they expect me to be." - Alex Caceres 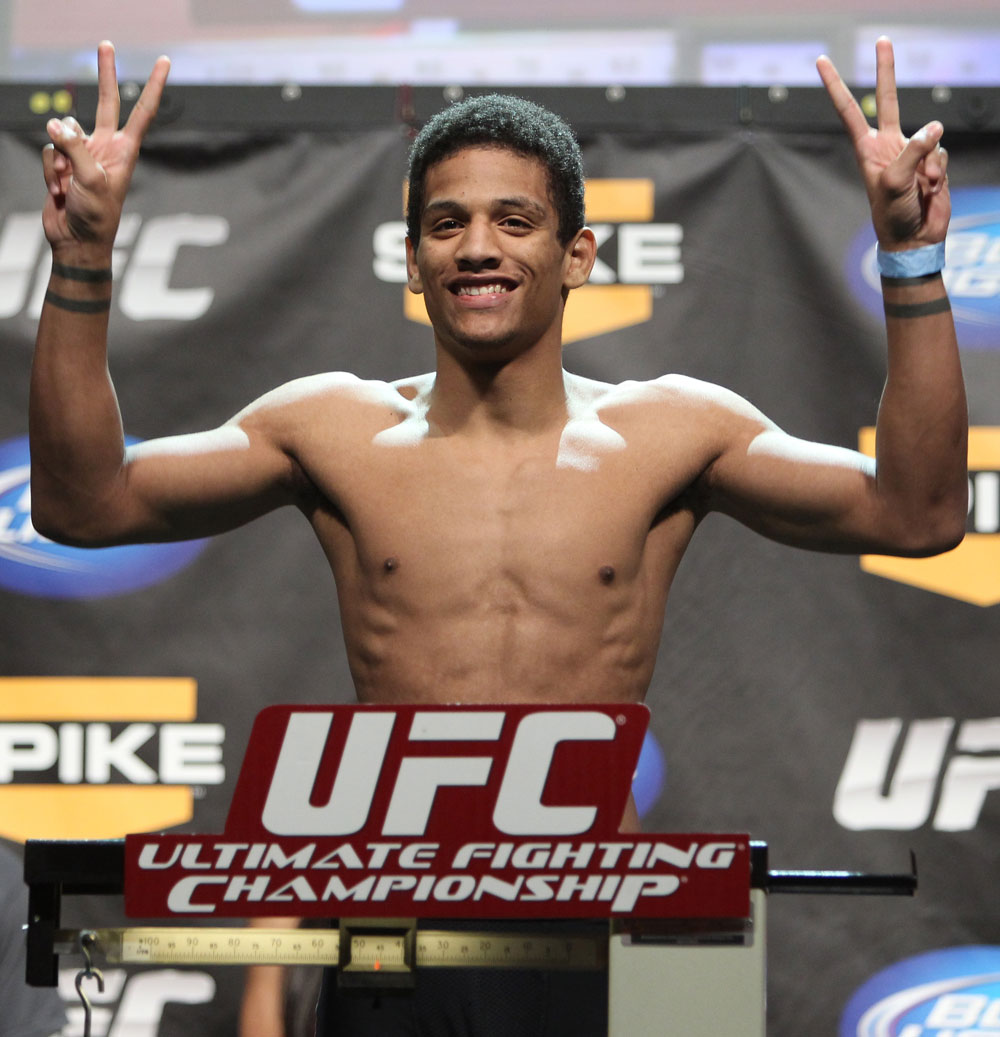 He wanted to keep the battle standing up, because that’s Alex Caceres’ M.O. Mackens Semerzier was having none of it. Deep within the tranquil veneer of the young 23-year-old known to the MMA world as “Bruce Leeroy” was a neurotic feeling once he was off his feet. Semerzier scored a takedown, and once Caceres couldn’t shake him he was forced to tap to a rear-naked choke.

When you’re one of 13 eliminated from an Ultimate Fighter tournament and still given a chance to shine in the UFC, a first-round submission loss isn’t exactly the finest impression. Caceres stood up and smiled, shrugged his shoulders and wore an expression that suggested, “Oh well, next time.” Semerzier knew better, knew that the smile masked serious pain, so he embraced his fallen foe and shared words of encouragement.

It was at that moment Caceres’ care-free attitude began to change.

“He told me to take that feeling to the gym with me every day,” Caceres said.

Alex “Bruce Leeroy” Caceres, his comb affixed in afro, persona crafted as TUF Season 12’s obligatory bad guy despite his happy demeanor, was switched on to a lesson in humility.

Every day for five months, forced to digest tapping out, Caceres (5-3 MMA, 0-1 UFC) vowed to prepare harder for his next fight more so than at any point in his young career. A shot at redemption climaxes August 14 in Milwaukee, when members of the new breed stare down one another, vying for a precious spot on Zuffa’s crowded featherweight roster.

Caceres meets Jimy “The Kid” Hettes, making his UFC debut in place of the injured Leonard Garcia, at UFC on Versus 5. He found out 12 days before Milwaukee that he’d have to face a Brazilian jiu-jitsu expert unbeaten in all eight of his professional fights -- his first six wins coming in the first round. Where Garcia comes at you thinking home run and going for broke, Caceres is expecting Hettes to execute a judo toss and grapple immediately.

Prior to Garcia pulling out, Caceres said he felt really comfortable, before quickly giving pause to add, “Not too comfortable.” He remains in the UFC only because he was fortunate enough that organization President Dana White decided to gift him with a precious second chance. His opponent represents a 180-degree turn in approach, but Caceres’ attitude remains the same. White’s reprieve allowed him to exhale until the moment was over and the pressure to win had truly begun.

“There’s still a lot of pressure just because I did lose my first fight and I’m guessing that if I do lose this next one it could be the wraps for me and I’ll have to build my way up again. Every fight is a must-win, but definitely I’ve been pushing myself a lot harder.”

There is indeed a greater emphasis on 8/14/2011. The Ultimate Fighter crafted Caceres as a polarizing figure every reality show craves, which has created preconceptions that defy his true personality. His Twitter handle is @BruceLeeRoyGlow, and his bio simply reads, “I got the glow.” Of course, he has his share of haters still stuck on TUF and fueled by the loss to Semerzier. Caceres told UFC.com that some people have said he doesn’t belong in the UFC. His mentality is to prove them wrong and himself right.

Not that Caceres is lost in the magnitude of what’s at stake. His hero is Bruce Lee. His favorite quotation from the martial artist, actor and philosopher comes from the opening scene of “Enter the Dragon,” when he scolds a student before teaching him the practice of using good emotions. “Don’t think. FEEL,” Lee said. “It's like a finger pointing at the moon.” After smacking him again, Lee shouts, “Do not concentrate on the finger or you will miss all of the heavenly glory!”

Caceres’ base is making everything he does look effortless. It appears that he’s blasé and nonchalant, but he’s actually talented enough to make the hardest of moves look fluid and easy. One of his greatest assets is controlling fear, slowing down a crisis situation enough to where the smile never fades and the assurance is there that “It’s OK, I’ve got this.”

“I don’t look at anybody as more than what I can be,” Caceres said. “When I go in there that helps calm me down. And what helps me really calm down is the fear of the fight. It’s all those doubts that are running through my head.

“When I feel like I’m in danger, or I feel scared, I can’t really explain it, but ever since I was a kid I tend to get really calm because I figured the best way I’m going to deal with the situation is to remain calm, to stay clear-minded. I’d be able to react more intelligently instead of just freaking out.”

Caceres’ forte is to frustrate opponents standing up. Semerzier knew that, which is why once he took Caceres down it was curtains. Caceres has not only placed a greater emphasis on his wrestling and takedown defense; he’s recalled the lessons learned from training under Georges St-Pierre for six weeks in practical isolation. It’s no longer a matter of training hard, but efficiently. In other words, using minimum input for maximum output.

“I was able to see how a champion would train,” Caceres said. “I’m training harder, more times a day, but not necessarily straining myself.”

A win over Hettes, and Caceres remains duly employed with less of a strain on his climb up the towering ladder that is the featherweight division. The line to a title shot is a long one, and Hettes is determined to make a dynamite first impression, but Caceres sees a victory as his own springboard to glory.

“As long as the line is, I’m going to keep getting better,” Caceres said.

Bruce Leeroy remains convinced of one more thing: he’s better since Semerzier. Much better. His cardio reached a new level when he completed nine five-minute rounds of straight MMA sparring and was ready to go longer. Semerzier inspired him that listening to and learning from mistakes is not a deterrent, but an inspiration, a “growing feeling” of being told he did something wrong.

“I don’t think many people are able to do that,” Caceres said. “I took that feeling and I hit the gym every day.

“I’m at an incredible level right now. I’m rising and I’m going to keep rising. I’m trying to make a 180 [degree] switch from what I was to what they expect me to be. Whether I win or lose this next fight, whether I fight in the UFC or not, I’m definitely going to be a better person and I’m going to be better than what I am -- today, tomorrow every day.

“All I have to do is be myself and that will shine through eventually, but I’m not too worried.”

This was when Caceres again learned something new, more words from the book of Lee. “I always learn something,” Lee once said, “and that is to always be yourself and to express yourself, to have faith in yourself. Do not go out and look for a successful personality and duplicate him.”

“That’s a good one,” said Caceres, a fighter in his formative years already faced with a potential seminal moment. Semerzier told him to remember the filthy taste of defeat, move on, adjust and go with the flow. “Be water, my friend” are Lee’s most famous words. A win on August 14 will be a big step forward for his disciple, one that will start because he took a significant step back.