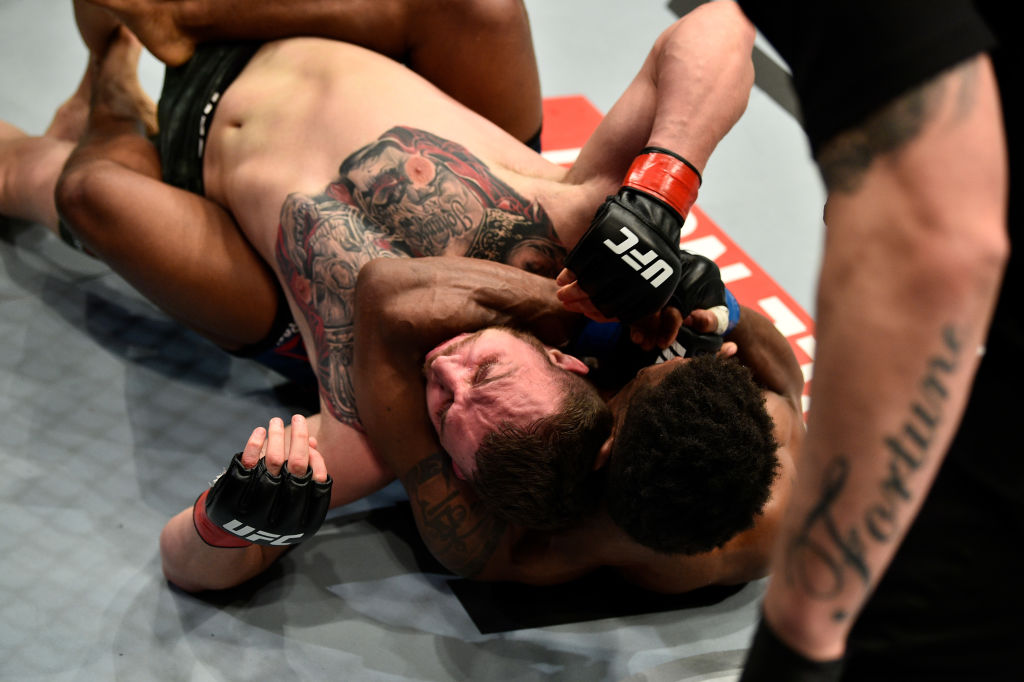 After two wins on Dana White’s Tuesday Night Contender Series, Dallas’ Charles Byrd kept his string of submission finishes going in his UFC debut, as he forced Wales’ John Phillips to tap out in the first round of their middleweight bout at O2 Arena in London.

Byrd got Phillips to the mat as the fight began and moved right into the mount, where he fired off ground strikes, continually adjusting position as necessary. Eventually, he was able to take Phillips’ back, and he sunk in a rear naked choke that prompted the Welshman to tap out at 3:58 of round one.

Roberts scored with his left hand early in the fight, prompting Enkamp to look for a takedown, but that attempt came up empty, allowing the London native to land another flush left hand. This one sent Enkamp to the canvas, with referee Leon Roberts intervening at 2:12 of the opening frame.

Roberts improves to 15-3 with the win. Stockholm’s Enkamp falls to 7-2.

After a grueling 15-minute war with Daniel Teymur in his UFC debut, Scottish featherweight Danny Henry took less than 40 seconds to end his second trip to the Octagon, as he handed Canada’s Hakeem Dawodu his first pro loss via submission.

Henry rocked and dropped Dawodu with a right hand as the bout opened, and he immediately went for his opponent’s neck. Dawodu battled hard to escape, but Henry was relentless, and 39 seconds into the fight, the Canadian was forced to tap out to the guillotine choke.

With one second left in his light heavyweight fight with Magomed Ankalaev, Paul Craig turned a likely decision defeat into a stirring victory, as he submitted the previously unbeaten Ankalaev just before the final horn, snapping a two-fight losing streak.

A kick to the body by Ankalaev in the second minute was the first telling blow on the fight, but a subsequent low shot by Craig allowed the Scotland native some time to recover. With two minutes left, Craig took his opponent down, but Ankalaev reversed position and stayed in control for the rest of the round, punctuating the frame with some hard ground strikes.

Craig had brief moments of success in the second, but Ankalaev was steadily increasing his lead on the scorecards, and early in the third, the Russian rocked Craig with a head kick. Craig recovered, but he wasn’t able to put together enough offense to deter his foe, who kept upping his work rate. Yet remarkably, with seconds remaining, Craig threw up a triangle choke and Ankalaev tapped, stunning the crowd. The official time of the finish was 4:59.

At the time of the finish, Craig was trailing 20-18 on all three scorecards.

Using his movement effectively, Johnson kept Ray from getting his offense in gear in the opening round, and while it was a close round, the Canadian likely took it.

Johnson briefly jarred Ray early in round two before looking for a takedown, but it was Ray controlling the sequence with a guillotine choke attempt before Johnson scrambled out of trouble and took the upper hand on a return trip to the mat. With a little over 90 seconds left, the two separated, and Ray went back to stalking his foe, ultimately pinning his opponent to the fence for a spell before a back and forth grappling exchange to end the frame.

Ray began finding his striking range in the third round, forcing Johnson to look for – and get – a takedown. With a slightly over a minute left, the fight was back on its feet, Ray scoring well before landing another takedown, allowing him to keep his foe grounded until the final horn.

Russia’s Dmitry Sosnovskiy long-awaited UFC debut was a successful one, as he submitted England’s Mark Godbeer in the second round.

Sosnovskiy did get Godbeer to the mat in the second minute of the opening frame, but a standup by referee Grant Waterman gave Godbeer the opportunity to get his strikes off as his opponent tired. In the second, Sosnovskiy got enough of a second wind to put his opponent back on the canvas, and while Godbeer rose, the Brit got rocked on the feet, allowing Sosnovskiy to go to work on the mat once more, and this time he sunk in the rear naked choke that ended the fight at 4:29 of round two.