"I think a win does good for me and I still need to prove that I can hang with the best of them." - Pat Healy 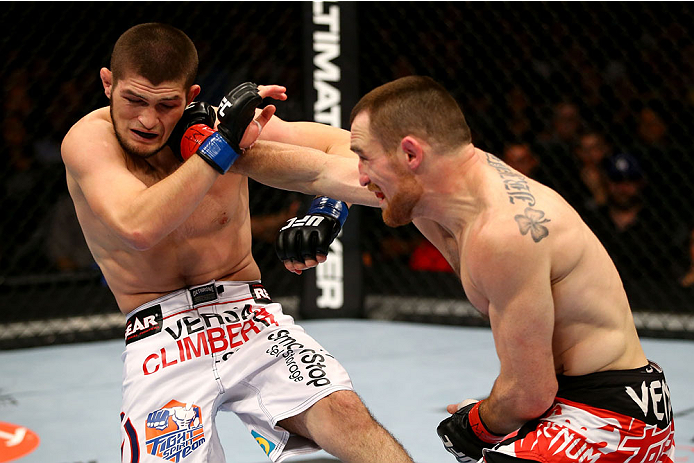 While he probably wanted some better results on the win-loss side of things thus far, Pat Healy readily admits that 2013 was his kind of year when it comes to staying busy, as his Saturday bout in Sacramento against Bobby Green will be his fourth of the last 12 months.

“I think that’s one really big plus to the UFC,” said Healy, who migrated back to the Octagon after Strikeforce closed its doors in January. “Having so many (UFC) shows gives you that opportunity to fight this much. It’s how we pay our bills, so the more opportunities you have to fight, the better, and that was always the struggle in Strikeforce. They just didn’t have enough shows to keep everybody active.”

It’s the most Healy has fought in a year since 2006, when he put the gloves on a remarkable seven times. And even that was a slow year for a true old-school battler like the Oregon native, who fought 10 times in 2005.

“I look back on those years as fun years,” he said. “There were so many more shows going on, and it was so much looser with medical requirements and stuff like that. Some states wouldn’t even require anything. You’d just show up and fight. It was like the years of pulling people out of the crowd because somebody didn’t show up (Laughs), and things like that. So they were fun years, but you certainly can’t be as focused as you should be when you fight that often. So having those couple months to zone in on that target does help quite a bit.”

And despite entering Saturday’s bout with Green with a 1-1, 1 NC slate, he hasn’t left anyone wondering why he’s fighting on the sport’s biggest stage. A longtime contender in Strikeforce, Healy has proven that he belongs among the best of the best in the UFC, even if he believes it will take a win over the streaking Green – winner of six straight – to show that to the world.

“He (Green) has been on a good winning streak, so anytime you beat somebody like that, you can steal some of their momentum,” said Healy. “He’s starting to build a good name for himself too, so I think a win does good for me and I still need to prove that I can hang with the best of them. And coming out and beating up Bobby Green will kind of prove that I belong in that upper echelon of athletes.”

It’s an odd statement from Healy, considering that even back when he was fighting practically every month, he was beating guys like Carlos Condit, Paul Daley, Tiki Ghosn, and Dan Hardy. And if that didn’t convince you, his six fight winning streak in Strikeforce should have done the trick. But as he explains, part of keeping that mindset is to stay on his toes; the other part is to stay a step ahead of an MMA fanbase that often changes its opinions like the weather.

“It’s one way I motivate myself, thinking that I’ve got to earn my respect every fight,” he said. “But MMA is still a really fickle world and you’re only as good as your last fight. I love when a guy like Shogun (Rua) loses a couple fights, and everybody’s saying he should retire. Then he goes and knocks somebody out and now ‘he’s back; he’s the Shogun of old.’”

Healy laughs, knowing that the MMA world has changed considerably since he made his pro debut in 2001. And that just doesn’t go for things that happen outside the fight game, but inside as well.

“I see guys that are in the UFC, they’re like 5-0, 6-0, and then they’re complaining about how much they make,” he said. “It’s crazy to think that a guy who’s only had five or six fights is upset because he’s making $12,000 a fight. I think even in boxing, unless you’re a highly touted prospect, that’s not gonna happen. So you do see some guys who don’t know how good they got it.”

An experienced veteran of nearly 50 pro fights in a 30-year-old’s body, Healy won’t be one of those ones taking his UFC stay for granted. So as he looks for his first Octagon win after a no contest with Jim Miller and losses to Anthony Torres (in 2006) and Khabib Nurmagomedov (in September), Healy is taking stock of what went wrong in his decision defeat to Nurmagomedov and making the necessary changes to guarantee it won’t happen again.

“The biggest thing I took away from it (the Nurmagomedov fights) is that I can’t get away from what I do well,” he said. “The grinding style, where I’m forcing clinches and dirty boxing and stuff like that, that’s what I do well, that’s what got me here, and the more I get away from that, I think the less success I have. So it was a good check to me to be like ‘okay, you’ve got to focus on what you do well; don’t worry about what the other guy does too much; worry about putting your style on him during the fight.’”

So no spinning back kicks or flying armbars on Saturday night?

“I don’t think you’ll see anything too spectacular or slick from me, I hate to say it,” he laughs.

That’s okay though. Whether it’s steady or spectacular, Healy always shows up to fight, and when you ask him if he’d go back to those days of seven or ten fights a year, you already know the answer.

“Yeah, I’d do it,” he said. “I may be 30, and I’ll be 31 next year, but I still feel young and my body still feels good, so I’m always itching for those fights. And the more I can fight, the more money’s in my bank account, so that’s always a good thing.”