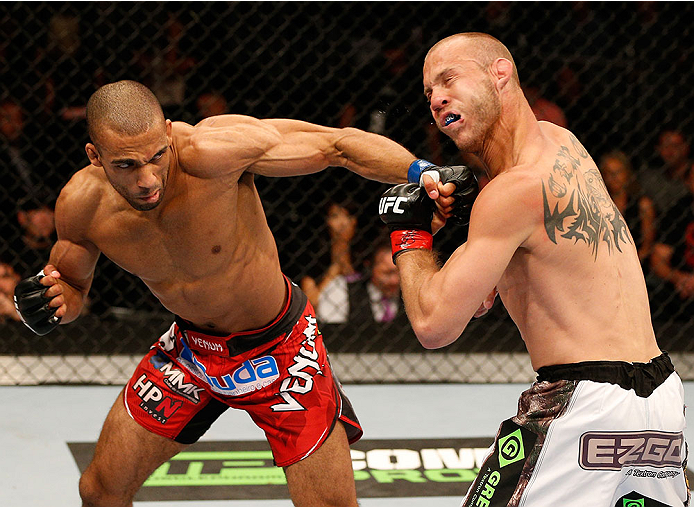 Edson Barboza has never been one to fight at a leisurely pace. From start to finish he’s throwing punches and kicks with the intent of getting his opponent out of there and going home early.

This Saturday, he really wants to go home early.

Matched up with fellow lightweight contender Bobby Green in the co-main event of UFC Fight Night in Austin, Texas, Barboza isn’t just fighting for himself and his wife Bruna anymore. In early December, the couple is expecting a son, yet while that’s the expected date of the youngest Barboza’s arrival, kids have a way of making their own schedules, so the sooner dad is home, the better. Either way, he can’t wait.

“It completely changes my life,” Barboza said. “First, because I have more responsibility; after all I have another mouth to feed. Plus, it's my first son and I can't wait to see him. It's magic. I don't know how to describe this feeling, but I know my life will completely change after he is born.”

It’s always nice to see the other side of fighters in this toughest of sports, knowing that the guy whose leg kicks ended the night for both Mike Lullo and Rafaello Oliveira (making him the first UFC fighter to do so by that method twice) is, at heart, a family man eager to see his child born like the rest of us.

There is business to tend to first though, and Green is not one that likes to go home early unless he’s punching the clock first. Winner of eight straight, including four in the Octagon, Green is rapidly soaring up the lightweight ranks, currently standing at number seven. Barboza rose two spots to number 11 this week, and a win over the Californian will likely make him rise even higher on Monday afternoon.

“He is a good fighter, a good boxer, let's do it,” Barboza said of Green. As for his ability to put himself in the title conversation with a win, which would make five victories in his last six, he’ll leave that up to the UFC brass.

“It is up to the UFC, and when (matchmaker) Joe (Silva) and (President) Dana (White) think that it's my turn to go to the title shot, I will be ready for this, and I am sure I won't disappoint them, because that's what I've been working for.”

The work never stops for the 28-year-old Brazil native, who went 3-0 in 2013 after the first loss of his career against Jamie Varner in 2012, and has gone 1-1 so far this year, losing to Donald Cerrone and stopping Evan Dunham. He’s no longer reckless in the Octagon, learning to mix his aggression with a striking accuracy that makes the shots he lands all the more devastating.

“I'm working very hard for this,” he said. “My coaches, Ricardo Almeida, Mark Henry and Anderson Franca are helping to fix my mistakes. I'm training very hard and I'm focused on getting better every time in every session because I know I will be the UFC champion.”

That’s as far as the soft-spoken Barboza will go when discussing the future past Saturday night; not just for him, but for everyone, including the combatants in two big 155-pound showdowns on the horizon between Anthony Pettis and Gilbert Melendez and Donald Cerrone and Myles Jury.

“These fights will be great fights, because these guys are on top of the rankings and I think they will be great entertainment for the fans of MMA.”

Clearly, Barboza is no Conor McGregor, but he is back in the co-main event spot for the second straight fight for a reason, and that’s because he talks pretty loud in the Octagon when the bell rings.

“It's great,” he said of being in a featured role yet again. “I hope I can always honor this faith that the UFC puts in me because I love to fight. It's my life. So when I step in the cage I give everything I have in there. It's a lot of work before getting in there, so the UFC can be sure that when Barboza steps in the cage he will give the fans a show.”

But if he has his way, this show may not deliver a full three acts.