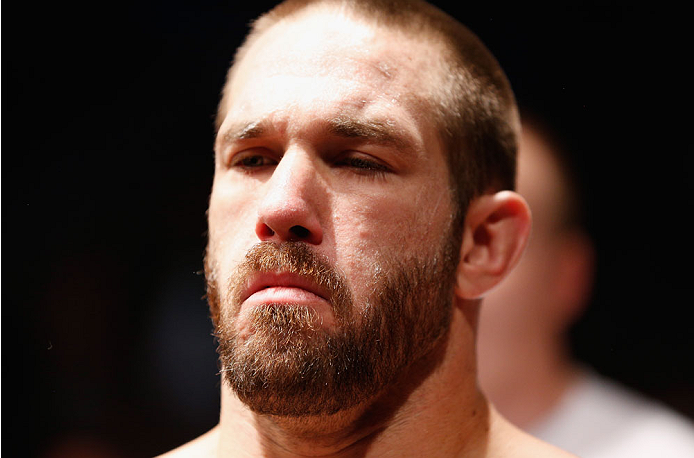 Bubba Bush isn’t quite sure if the infamous “Octagon jitters” had anything to do with his first run at victory in the UFC, but whatever was going on with him just wasn’t right. The born and bred Texan had the right amount of experience and titles on smaller stages in the sport to give him the confidence he needed to make the  jump to the big leagues; the only thing he needed to do was execute the way he’d proven he could time and time again.

But that didn’t happen, and his long-awaited UFC debut ended in disappointment at the hands of Kevin Casey at UFC 175 in July of 2014.

The loss would eventually be overturned to a “no contest” after Casey failed his post-fight drug test, but the Nevada State Athletic Commission’s decision to do so was just a detail at that point. “The Fightin’ Texas Aggie” knew he didn’t show a fraction of his capabilities in his first bout inside the Octagon, and he immediately set his sights on working towards redemption.

He made the adjustments he needed to make, but did so with the broader perspective that comes with being a UFC fighter.

“I definitely have some perspective now,” Bush said. “Fighting in the UFC for the first time is tough and the Octagon jitters are definitely a real thing. I think I’ll be a bit more comfortable this time around, but the crowd is Dublin is well known for bringing the energy. I’m excited to experience that firsthand, but it’s also something that I’m going to have to get used to quickly.

“To be honest, going to the UFC feels like a step down at first in regard to pressure. You go from being the headliner on the card for a smaller promotion that is being shown on national television with several thousand people watching to being one of the first fights on a UFC card at five in the afternoon with a few hundred people in attendance. The pressure is totally different.”

While various injuries would keep his road back moving at a measured pace, once his fight against Garreth McLellan at Fight Night: Poirier vs. Duffy in Dublin was booked, Bush’s focus shifted into high gear. In a situation very similar to his own, the South African middleweight also stumbled in his official promotional debut, which has set the stage for a high stakes showdown on the “Emerald Isle” on October 24.

Both men need a victory to establish themselves in the ultra-competitive 185-pound mix, but only one will have their hand raised at the end of battle. Bush is confident he’ll be the one walking back to the locker room with his head held high, and he plans on giving the passionate Irish contingent a show in the process.

“I’m really looking forward to the fight this time and I’m focused on the work,” Bush said. “I’m going to stick around for a week after to see the sights, but there is a job to do first. I think it’s a really cool fight. We are both former champions in other organizations and he represents an entire country. We have very similar styles and I think he’s very beatable. I like the matchup and I’m going to go in there and handle my business.”

Even though Bush may be a newcomer to the UFC ranks, traveling the globe is somewhat old hat for the 30-year-old College Station resident. The product of a military family, Bush is no stranger to being on the move, and ever-changing scenery is commonplace in the nomadic world of the fight game. For his upcoming bout with McLellan, he will get the opportunity to check Dublin off the list of places he’s always wanted to visit. And the trip becomes even sweeter since it comes with rapid-fire MMA ruckus attached.

“I’m really excited about fighting in Dublin,” Bush said. “It has always been a dream vacation spot, so to be able to go over there to fight then see the city a little bit is awesome.

“There is certainly a lot of appeal to being able to travel the world,” he added. “I grew up in a military family and we traveled a lot. I have been living in the same town now for 10 years and it’s the only time I’ve ever been in the same place for that long, but I do love to travel and get to experience different places and cultures.”

Although Bush will be looking to establish himself on the sport’s biggest stage later this month, he plans to do so while keeping his beliefs and causes visibly on his sleeve. As a proud Christian, his beliefs keep him grounded, but it is a fight he wages outside of the Octagon that presents a unique challenge for the up-and-coming middleweight to handle.

“One thing people need to know about me is that I fight for Jesus Christ,” Bush said. “I have dedicated my life to being his servant and I try to put his name out there as much as possible. I’m also diabetic, so I’m trying to bring as much attention to the issue as I can in the hopes of maybe helping someone else who is also diabetic because I don’t think there has ever been a diabetic who competes at this level of competition.

“It definitely creates some tough spots, but everyone has their struggle. I don’t think I’m unique in that aspect. I just happen to have an ailment that a lot of Americans are currently dealing with and I’m trying to show that you can overcome any adversary in your way. You can do a lot more than you think you can. I’m a little out there. I enjoy the struggle. Fighting is in my blood and it’s something I love to do.”