Burns prioritizing getting the KO ahead of UFC 226 bout 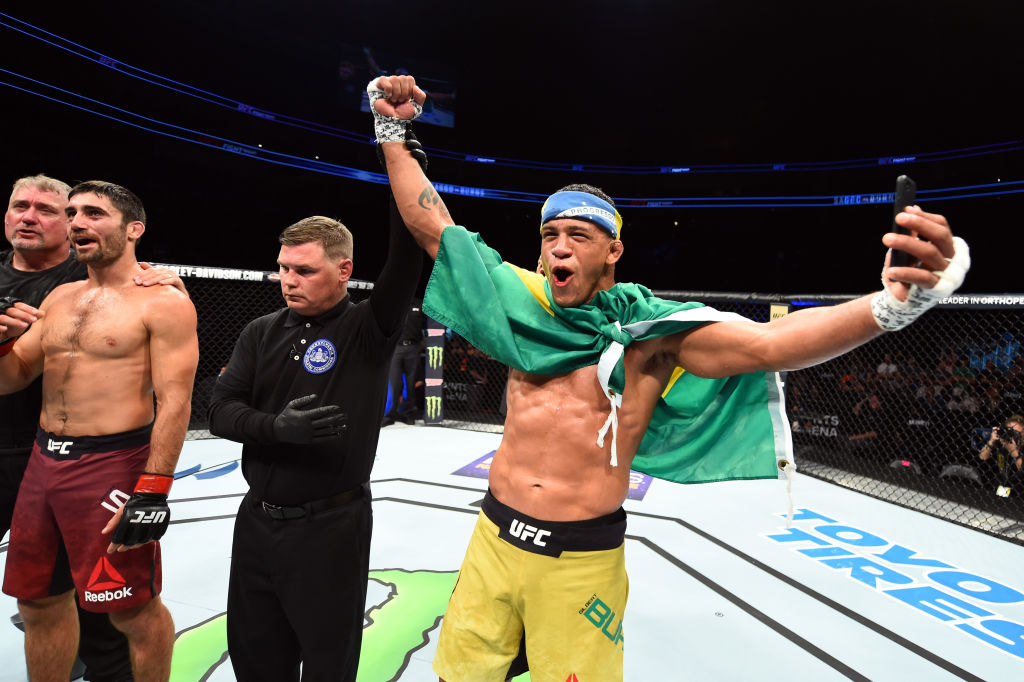 Gilbert Burns of Brasil celebrates after knocking out Jason Saggo of Canada in their lightweight bout during the UFC Fight Night event inside the PPG Paints Arena on September 16, 2017 in Pittsburgh, Pennsylvania. (Photo by Josh Hedges/Zuffa LLC/Zuffa LLC via Getty Images)" align="center" />
Fight game or not, you would be hard pressed to find a nicer guy than Gilbert Burns. Seriously. But when the classy Brazilian family man steps into the Octagon, let’s just say that nice guy disappears for 15 minutes or – often – less.

“I think I have to activate that mood,” he laughs. “I’m a 24-hour dad, a husband, a Christian, but as soon as I get in the Octagon, it’s a fight. It’s kill or be killed. I don’t want to be here that long and I don’t want the judges putting their hands in. I want to finish, I want to be the champion, and I’m hungry. As soon as I get in that cage, it clicks. I’m a fighter, I’m a competitor.”

That attitude has led him to a stellar 6-2 UFC record in which he’s finished five of those six victories, and it’s a good reason why his UFC 226 bout with Dan Hooker is one of the most highly anticipated on a stacked card. But the 31-year-old refuses to look into the future for what a win over “The Hangman” will do for his career.

“Every fight is a big test and I’ve gotta go there and perform my best,” he said. “I don’t put a lot of pressure on myself, I just want to go out there and dominate the fight. I know it’s a big card, I know everyone will be looking, and I just want to finish the fight. Then I think the situation will present itself. As soon as I get that, it will be a big step in my career. I see the next fight as a big challenge, but also a great opportunity.”

It’s the kind of fight that sells itself, and it’s a good position for Burns, who now makes his home in Florida, to be in after what has been a rollercoaster year. First, he was pulled from a February bout with Olivier Aubin-Mercier when it was deemed unsafe for him to cut a significant amount of weight on fight week. Then an April matchup with Lando Vannata was scrapped due to a Vannata injury. Burns fought on, scoring a walk-off knockout of Dan Moret, and here he is. All those twists and turns could distract someone, but “Durinho” looks at his 2018 glass as half-full halfway through the year.

“I gained a lot of experience this year,” he said. “I did do a full training camp (for Aubin-Mercier) but I didn’t fight so I could see that with frustration that I trained so much and didn’t get to perform or I could see it in a good way, like, man, I trained so hard and improved so much and didn’t get any damage at all. I got a lot of different training that made me improve so much in a lot of different aspects of my game. So I’m a better fighter because of all those situations. Here I am, knocking people out, getting better, improving, I’m happy with my performance and I’m working hard and grinding every single day. I like 2018 and we’re just getting into July.”

See, who’s nicer than Gilbert Burns, a fighter who has found that sweet spot in his career where he is truly dangerous wherever the bout goes. Hooker is at that same point, meaning we could be in for something special in Las Vegas on Saturday.

But I have to ask the million dollar question. If Burns has his choice, does he use his black belt level jiu-jitsu game to get a submission, or his heavy hands to score a knockout?

“To be very honest with you, I don’t care,” he said.. “I want to finish the fight. That’s the important thing. I put in so much work and I don’t want to leave it in the judges’ hands. Before, I was so much about jiu-jitsu and the submissions, and I still love the submissions and the jiu-jitsu, but I’m getting strong with my hands and I’ve put a lot of work in my striking. So right now, it doesn’t matter. If I feel that I’m comfortable in the standup, I’m gonna keep standing. If I don’t feel too comfortable and the guy’s doing a good job, I’ll take him down and choke him out.”

I don’t know, by the look on his face after his wins over Moret and Jason Saggo, I think Burns likes the knockouts more.