The move of UFC veteran Joshua Burkman to the lightweight division was a successful one, as the former Ultimate Fighter competitor picked up his first Octagon win since 2007 on Saturday, decisioning KJ Noons over three rounds in UFC Fight Night action at the MGM Grand Garden Arena in Las Vegas.

Noons was surprisingly passive until the closing seconds of round one, when he flurried at Burkman, and that allowed “The People’s Warrior” to take over with kicks to the body and legs that gave him a clear edge in the first frame.

Burkman got a takedown in the second minute of round two, adding to his point total, even though Noons popped right back to his feet. From there, it was a near-repeat of the first round, with Noons scoring a few more times, but not enough to assume control of the fight.

Things got worse for Noons as soon as the final round began, as he was taken to the mat by Burkman. The Hawaii native rose fairly quickly, but he needed to show a sense of urgency if he was going to pull the fight out, and he did just that, briefly Burkman with some flush punches as the Utah native went all in to get the takedown, only to come up empty until the final minute, when he put Noons on the deck with 28 seconds left and kept him there. 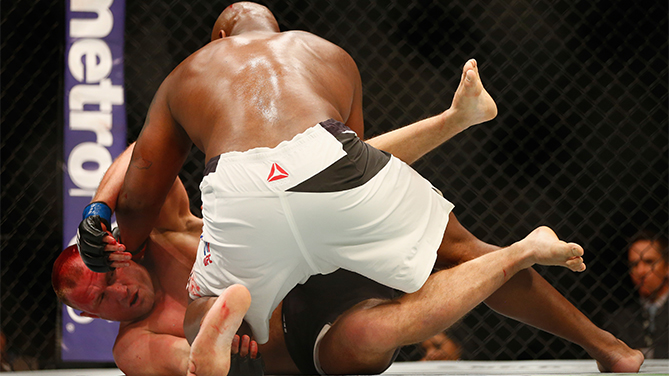 Heavyweight power hitter Derrick Lewis added another knockout win to his slate, with “The Black Beast” stopping Polish newcomer Damian Grabowski in the first round.

“I can’t be the beast if I can’t fight like one,” Lewis said.

A wild opening saw Grabowski score a takedown, only to have Lewis jump up and score with a takedown of his own before missing a punch to the head that most certainly would have ended the bout. Lewis reset and began firing away with strikes that bloodied Grabowski. With no place to escape, Grabowski tried to play defense, but after a huge right hand, referee Mark Smith had seen enough, stopping the bout at the 2:17 mark. 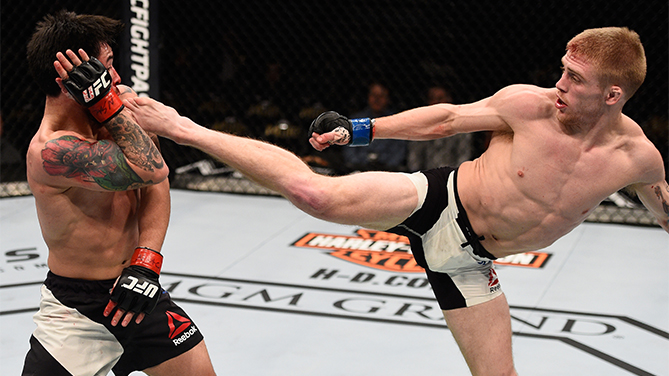 Borg, 22, scored with his first takedown of the fight, but Scoggins shot right back up and pinned his opponent to the fence. Borg got loose, but a second takedown attempt came up empty, as Scoggins’s game was sharp both offensively and defensively, and the South Carolina product was in control the rest of the way, bloodying Borg’s nose in the process.

Pulling guard in order to get the fight to the mat, Borg looking to do work from his back, but Scoggins, 23, wasn’t having it, as he fought his way back to his feet, and after some solid stand-up work, he scored the takedown on Borg. There would only be a brief stay there, as Scoggins wanted to continue showcasing his flashy kick game, and he did just that, banking another round.

Borg got the fight to the mat to begin round three, again hoping to make something happen, but soon he found himself on his back with Scoggins in control once more and that’s the way the rest of the fight played out, capping off a thorough and impressive performance for the South Carolina native.

It’s only February, but unbeaten Chilean featherweight Diego Rivas may have delivered an early Knockout of the Year candidate with a flying knee finish of Noad Lahat.

An eye poke from Rivas brought an almost immediate halt to the bout as it began, but after a visit from the doctor, the fight resumed and Lahat secured a takedown. The jiu-jitsu black belt went to work and sunk in a guillotine choke, but Rivas was able to see daylight when Lahat let the choke go. Moments later, the Israel native took his opponent’s back and then moved to an arm triangle. The gutsy Rivas kept finding a way to survive though, and he made it to his feet in the final minute. A subsequent slam by Rivas almost landed him in another guillotine, but he was lucky to make it out of the round without any further damage.

The Chilean battler turned everything around moments into round two though, with a flush flying right knee that put Lahat down and out. Referee Mark Smith stepped in at the 23-second mark to call a halt to the bout.