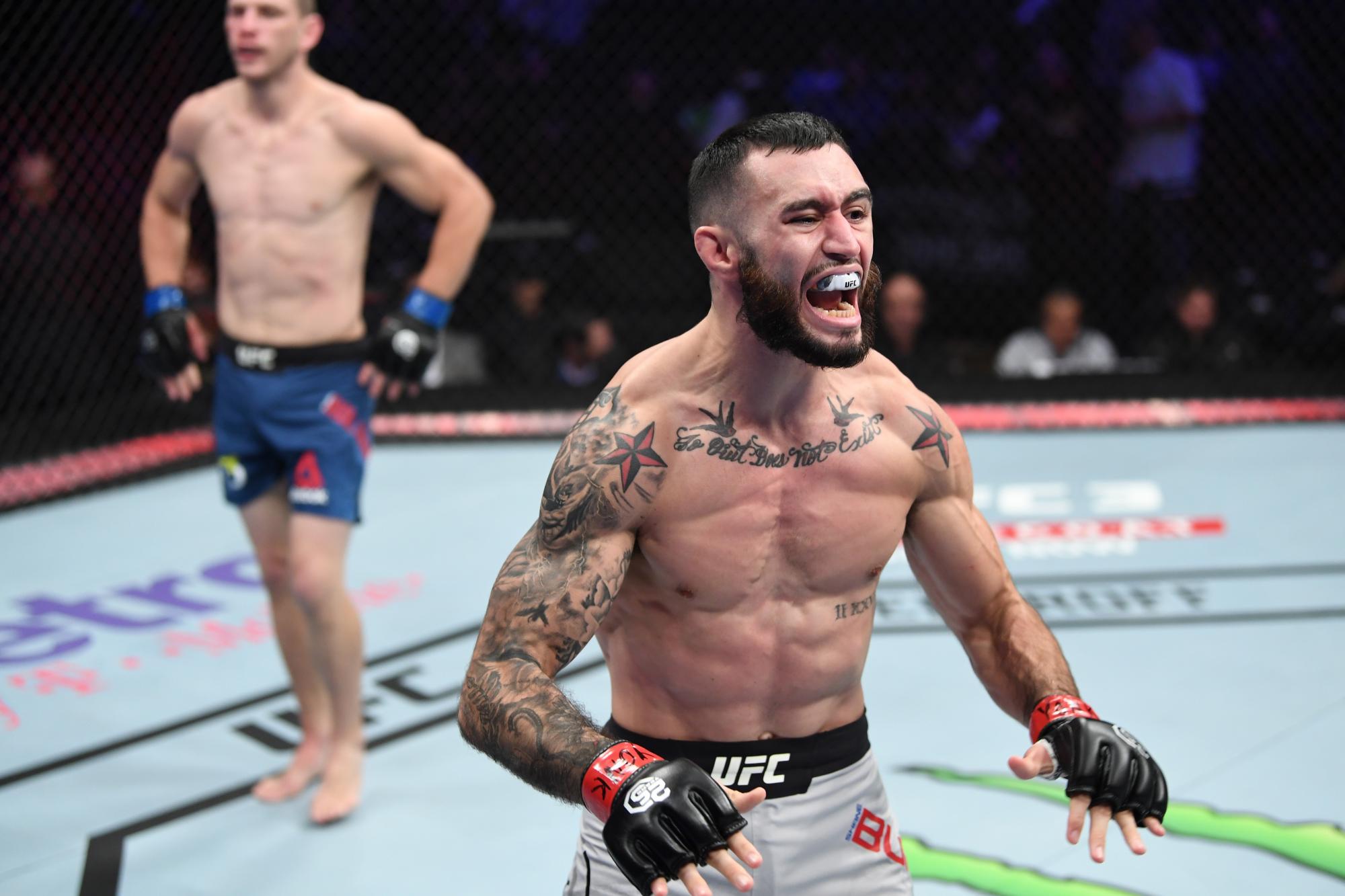 The UFC 230 Prelims were littered with early finishes and exciting moments
By E. Spencer Kyte • Nov. 4, 2018

Before the action shifted to pay-per-view, seven pairs of combatants from across the weight class spectrum stepped into the Octagon to get the crowd at Madison Square Garden keyed up for the main card.

From the heavyweight opener through the featherweight finale, the UFC 230 preliminary card fights set the tone for the festivities that would follow and featured more than a few noteworthy performances.

A cult favorite who has hit a rough patch, Knight hit the cage at MSG looking to halt a three-fight losing streak while welcoming Rinaldi to the 145-pound weight class, where the North Carolina native looked to bounce back from his January loss to Gregor Gillespie and pick up his second UFC victory.

Right out of the chute, Knight came out firing aggressively, but Rinaldi remained patient and attacked with takedowns, taking the fight to the floor. Though Knight kept active, hunting for openings off his back, it was Rinaldi who controlled the action throughout, grinding from top position for the vast majority of the first five minutes.

After a brief exchange on the feet to start the second, Rinaldi once again brought the fight to the ground, immediately passing to side control before working around to Knight’s back and clamping down on a body triangle, showing outstanding control as he continued to search for a choke.

In the third, it was Knight who attacked with a back-take, but Rinaldi immediately countered with a kimura sweep, using it to transition to the back and hunt for the choke again. Knight defended throughout and refused to give up, but the final five minutes where the same as the first 10, with Rinaldi dominating on the canvas.

This was an exceptional performance for the 31-year-old in his featherweight debut and one that should set him up for even bigger opportunities in 2019.

The flyweight clash between Eubanks and Modafferi was already carrying a ton of intrigue heading into fight week, as the duo squared off in the semifinals on Season 26 of The Ultimate Fighter, with Eubanks emerging victorious before both garnered their first official UFC victories this past summer to solidify their place in the title chase.

But the attention on the penultimate preliminary card bout was ratcheted up to 11 on Friday when Eubanks failed to make weight, turning this already compelling contest into a must-see matchup.

From the outset, the speedy and athletic difference between Eubanks and Modafferi was evident, as “Sarj” landed with quick, clean strikes as the popular veteran moved awkwardly on the outside, unable to respond. Midway through the frame, Eubanks decided to take the fight to the canvas, putting Modafferi on her back and controlling the action on the canvas, avoiding sweep attempts and submission setups while searching for offensive opportunities of her own.

In the second, Modafferi came out more aggressive, pressing forward behind herky-jerky hands, but failing to land anything of substance. As she looked for an opening to get inside, Eubanks connected with a high kick that rocked “The Happy Warrior,” with a follow-up right hand putting Modafferi on the canvas.

However Modafferi survived and kept pressing forward, securing a body lock and twisting Eubanks to the ground with two minutes to go in the round. As Modafferi looked to advance, Eubanks attacked with a kimura, prompting Modafferi to defend and counter, maintaining top position through the horn.

In the third, Eubanks’ speed and power edge on the feet re-emerged early, but Modafferi continued to come forward undaunted. Midway through the round, a telegraphed takedown attempt led to Modafferi getting dumped to the ground, with Eubanks working from top position, stifling sweep attempts and staying sticking through the end of the round.

Once the judges scores were tabulated, it was Eubanks who once again emerged with a unanimous decision victory.

The second bout in a tetra-pack of featherweight contests slated for the prelims, this matchup highlighted just how deep the 145-pound ranks are at the moment.

Arce had looked outstanding since arriving in the UFC earlier this year, while the 10-2 Moraes was coming off his first victory after debuting against Zabit Magomedsharipov, yet neither man had been able to crack the rankings and they battled it out on Saturday to see who would move one step closer to entering the Top 15.

Forty seconds into the fight, Moraes dropped Arce with a clean right hook as the hometown favorite was coming forward, following him to the canvas with a series of heavy shots. But Arce covered up and defended well, eventually working back to his feet and going on the offensive, climbing onto the Brazilian’s back by pushing of the fence and attacking the rear-naked choke through to the final horn.

Early in the second, Moraes tagged Arce with another good shot right out of the chute, prompting the New Yorker to push forward for a takedown. As they clinched along the fence, the Brazilian connected with a sharp elbow that split Arce open and immediately caused a crimson stream to start flowing from the side of his face, leaving both men tinged red.

With a minute left, Moraes dropped Arce in the center of the cage, dropping him with another clean shot just as he did in the first, but once again, Arce defended well, returned to his feet and made it to the horn.

As the canvas turned into a Jackson Pollock painting in the third, Arce continued to press forward, showing incredible heart and tenacity as he looked to take the fight to Moraes over the final five minutes, blood loss be damned.

When the final horn sounded, both men were stained red, but smiling, happy with the effort they’d put forward and honored to have shared the cage with one another in a close, memorable clash.

After the judges handed in their scorecards, it was Moraes who came away with his hand raised in Manhattan, collecting his second straight decision win.

Saunders and Good kicked off the televised portion of Saturday’s prelims with a clash between welterweight veterans looking to get back into the win column.

A native New Yorker representing Team Tiger Schulmann, Good was returning for the first time in 15 months and fighting for only the second time in 39 months, while Saunders was hustling back into action following his second-round submission loss to Sergio Moraes in late September.

Less than two minutes into the opening round, the welterweights started trading shots in the Thai clinch, with Saunders working knees to the midsection and Good responding with short uppercuts to the head and body. Just when it looked like Saunders was loading up for another knee strike, Good took his legs out from under him with a driving uppercut that put the veteran on the canvas.

The follow-up hammerfists were a formality; Saunders was out and Good was back in the win column in spectacular fashion.

Official Result: Lyman Good def. Ben Saunders by knockout (punches) at 1:32 of Round 1

A graduate of Dana White’s Tuesday Night Contender Series, Frevola’s unbeaten start to his career came to a sharp, sudden halt when he debuted in the Octagon back in January, as the Long Island resident landed on the wrong side of thunderous shot from Polo Reyes a minute into their bout in St. Louis.

After an impressive start to his UFC tenure, the always-entertaining Vannata was looking to snap a three-fight winless streak in this one, his first appearance since splitting with the team at Jackson-Wink MMA.

This one was forecasted as a potential Fight of the Night winner and it did not disappoint.

The early stages of the first round featured Vannata on the offensive, sending Frevola’s mouthpiece flying as he connected with strikes inside with a big head kick behind it. But from there forward, “The Steamrolla” found his rhythm, taking the fight to Vannata and hurting the all-offense lightweight multiple times.

In the second, Frevola came out quickly, but it was Vannata who landed clean, hurting the Long Island native with a series of clean punches along the cage that would have stopped most mortals. While Frevola weathered the storm and tried to fire back, Vannata stayed patient and kept the pressure on, hunting for clean shots and looking for the opportunity to end the fight in spectacular fashion.

Although the action wasn’t as exhilarating in the third as it was in the opening 10 minutes, it was the closest frame of the fight, with both men having moments where they landed big shots and just missed with others. Battered and bloodied, they traded to the end before sharing an embrace in the center of the cage, both confident they had gotten the job done.

When the nines and tens were tallied, the judges scored it a majority draw, which felt like the right result after such a fun, competitive 15-minute affair.

Burgos suffered the first loss of his career fighting in enemy territory earlier this year when he took on Massachusetts native Calvin Kattar in Boston. Now on his home turf, “Hurricane Shane” hoped to get back into the win column with a victory at Madison Square Garden.

Standing in his way was Holobaugh, a regional veteran with loads of experience coming off an entertaining scrap with Raoni Barcelos back in July. While he ended up on the wrong side of the results, the former Titan FC standout showed he has the potential to be an exciting addition to the featherweight depth chart and looked to cement his place on the roster by picking up his first UFC victory on Saturday.

Right out of the gate, these two started fighting in a phone booth, trading sharp punches, Holobaugh adding chopping kicks into the mix for flavor. Midway through the round, Holobaugh dropped Burgos, connecting with a pair of hooks, but when he followed him to the floor, looking for the finish, the New Yorker flipped the script.

Burgos immediately threw up an armbar attempt, trapping Holobaugh’s arm in a precarious position and forcing the veteran to tap.

This was two minutes of electric action and a slick finish from the featherweight hopeful Burgos.

Official Result: Shane Burgos def. Kurt Holobaugh by submission (armbar) at 2:11 of Round 1

In the heavyweight opener, Poland’s Wieczorek looked to build off his April submission win over Arjan Singh Bhullar by stepping up on short notice to take on the returning de Lima. A long-time light heavyweight, “Pezao” opted to stop making the cut to 205-pounds and instead compete in the big boy ranks, hoping that a change of scenery would bring an end to his inconsistency inside the UFC cage.

While Wieczorek started the fight with a smooth level change that landed him in top position, he got a little sloppy, allowing de Lima to reverse positions and the Brazilian dominated the action from that point forward. After controlling the action on the canvas in the first, the Brazilian heavyweight newcomer punished Wieczorek’s legs with heavy kicks in the second.

In the third, de Lima landed in side control following a body lock takedown, floating into mount momentarily. While Wieczorek worked his way back to his feet, it wasn’t for long, as de Lima put him back on the canvas two more times en route to riding out the round and earning a clean sweep of the scorecards.