"It runs through your head a lot to quit, but I had a goal. I started
fighting just for fun, and once I realized I had a chance, I wanted to
achieve it." - Bubba McDaniel 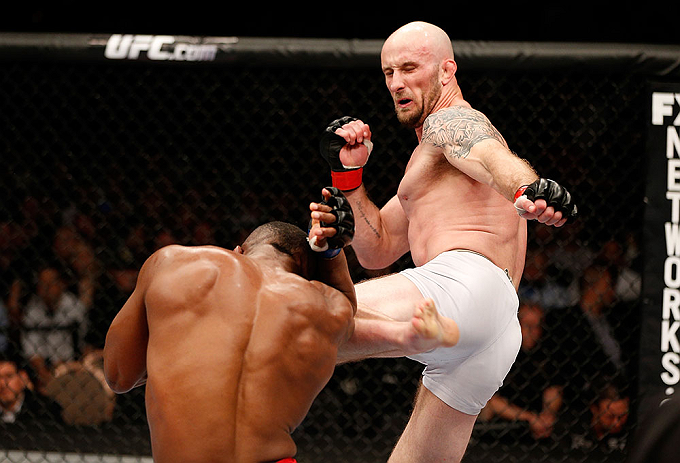 Robert “Bubba” McDaniel laughs as you ask him if he ever reached a point in his nine year mixed martial arts career when he thought that the dream of becoming a UFC fighter was just never going to become a reality.

“I reached that point in my career about five years ago.”

At the time, McDaniel was like dozens of promising fighters battling it out on the local circuit, winning more than he lost, but either never getting the big break or falling short when that break came.

“It was a grind,” he said. “If I had a fight of my own, I’d get focused, but on the in between times, it was always ‘man, when am I gonna get recognized, when am I gonna have a little help, when’s this gonna actually pan out?’ My kids were getting older, so I obviously I thought, well maybe I should just go home and hang out with them. At those points, it’s hard to keep focused, but I had a dream of accomplishing a goal of being in the UFC, and I wasn’t gonna stop until it happened.”

So McDaniel kept training and kept fighting. It had been a way of life for the native of Childress, Texas since 2004, when he started fighting as a hobby.

“I was fighting in Toughman contests before that just to see how tough I was,” he recalled. “And at the time I wasn’t really that tough. (Laughs) But it was one of those things I was doing for fun, just as a hobby. I was bouncing in clubs, things like that, and I had my second amateur fight when they had already started promoting The Ultimate Fighter. I barely beat the curve to be one of those guys who came in because they saw the show. That wasn’t me. I was trying to do it beforehand. After that it became a mainstream thing and we had more people coming in faster, but a lot of them got weeded out real fast. Even at my gym before the show, they tried to get me out of there. They tried to beat me out of the gym because they had their hardcore group of guys and they weren’t really open to outsiders unless you came in there and paid your dues. I got plenty of beatings and I learned a lot of things the hard way. And that’s been my whole career.”

By the end of 2008 though, McDaniel was treading water. 12-5 as a pro, he only went 2-3 that year, and the conversations between himself and his family and friends about fighting being a viable future for him increased.

“I had that talk with everybody a lot,” he said. “My family was always wondering when I was gonna give up and come home and hang out. I spent a lot of time away from everybody, everybody’s growing up, and I’m missing everything. Many lonely nights have been spent, you can’t have a relationship with anybody else unless they’re involved in some kind of fitness sport or an athlete because nobody understands your lifestyle. And there’s a lot of hard, lonely nights, sitting there by yourself going ‘why am I doing this?’ It runs through your head a lot to quit, but I had a goal. I started fighting just for fun, and once I realized I had a chance, I wanted to achieve it.”

After a 2008 loss to Alexander Shlemenko, McDaniel began to make his move. He won eight of his next nine fights, a string that included a 2011 move to Albuquerque to train with Greg Jackson and company, and he finally got his break: a berth of season 17 of The Ultimate Fighter.

One of the early favorites to win the competition, McDaniel didn’t live up to those expectations, but 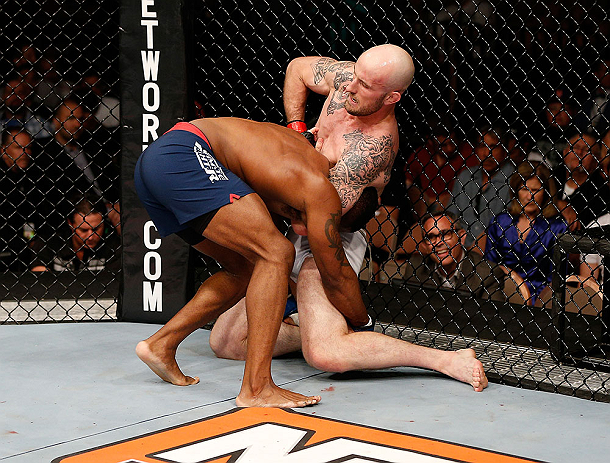 with a 2-2 record on the show, he earned a fight on the show’s finale card in April against Gilbert Smith. He got his UFC fight, but if he was going to stick around, he would have to win. And if he didn’t, his dream may have been over for good.

“I definitely looked at it like that,” he said. “I looked at it as if I didn’t get signed, this might be the hard end to a dream that I was looking forward to achieving. That was always in the back of my head. And me going in with the pressure I put upon myself, you can ask anybody, I’m my worst enemy. I put more pressure on myself than anybody else ever could. The way I grew up, being a picked on kid myself and bullied around, I never want to feel like that again, and anytime I lose a fight or I feel like somebody’s kind of in my head or something like that, I feel like I’m that kid again and I never want to feel like that. So it builds a weird aura around myself sometimes to where I put so much pressure on myself like it’s a life or death situation when it’s really not that big in the end.”

McDaniel did rise up when the pressure was on though, submitting Smith in the third round. At long last, he was a UFC fighter. But if you expected backflips and leaps into the crowd, there were none.

“The emotions were really weird,” said the 30-year-old. “I had been preparing myself for it for a long time, but then I was like ‘you know what, it doesn’t seem much different from any other fight that I’ve already had.’ At the end I shook his hand, I said my piece to him about it being a great fight, I did the interviews, and the only real crazy difference was that it was on a bigger stage and I got to be on TV. Plus, my friend (Jason Hernandez) had passed away and I had a lot of emotions I was trying to keep pent up at the time, so I don’t think I allowed myself to feel a first UFC win yet.”

He’ll get a second chance to do that on Wednesday, when he faces TUF 11 veteran Brad Tavares. Ironically, McDaniel had tried out for that season but didn’t make the cut. Despite this, he was then and still remains a fan of Tavares.

“He (Tavares) is fun to watch and he goes out there and tries to put on a show. He’s been out there and he’s beat guys that are grapplers, guys that are strikers, and it shows that he’s one of those guys that if you give him a top ten fight, he’s gonna go in there and fight. I think there are guys in the top ten that he would beat, so for me to get a fight like that says a lot, unless they’re trying to feed me to the wolves, but if they’re doing that, I’ve been there and done that before and won those fights also. So it’s not anything that adds any crazy pressure to me.”

No, not at this point. Bubba McDaniel has seen it all, and he’s lived to tell about it.