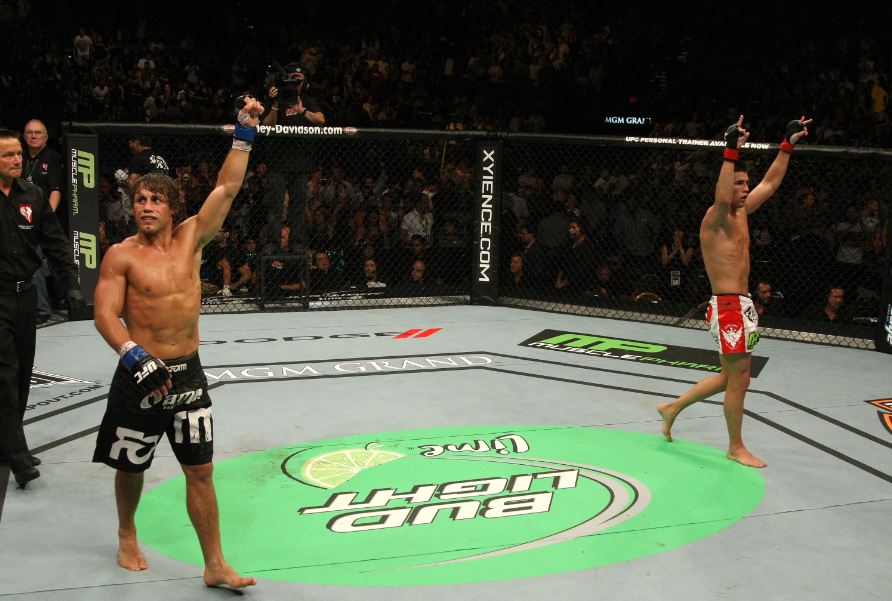 Including the international versions, The Ultimate Fighter has had 29 seasons, and UFC President Dana White is not shy about revealing that his favorite part of each run is the Coaches’ Challenge.

Recently, White tweeted a picture of himself taking a helicopter to a remote desert location outside of Las Vegas as a sneak peek into the forthcoming Ultimate Fighter: Team McGregor vs. Team Faber’s coaches’ challenge, and whether it’s shooting pool or go-kart racing or penalty kicks, the competition is a bit of random fun pitting the rival coaches against each other, usually with a cash prize and a whole lot of pride on the line.

Here’s a list of the top 10 TUF Coaches’ Challenges:

Technically, this was the first “Owners’ Challenge” as this unique season saw two gyms put their personal beef on display inside the Octagon. At the center of this conflict was American Top Team owner Dan Lambert and Blackzilians team owner Glenn Robinson. Week after week, Lambert and Robinson made it crystal clear how much they did not like each other, which would always lead to Lambert issuing a physical challenge to Robinson to really put their dislike to the test. It wasn’t the grappling match he wanted, but Lambert and Robinson did get to face off in a relay race with three fighters from their respective teams and themselves as the anchor leg. Watching a half dozen athletes run around a track is fine, but watching two middle-aged, local businessmen who hate each other try to break the other’s spirit in a foot race is priceless.

Their fiery feud would have made a game of “Hungry Hungry Hippos” a battle for the ages. Instead, current UFC women’s bantamweight champion Ronda Rousey and former Strikeforce women’s bantamweight champion Miesha Tate went “American Gladiator” style for their seasonal clash in an inverted climb up an indoor rock wall. Considering it was the second to the last episode of the show, “Cupcake” and “Rowdy” were at zenith levels of hate, which made the close race to the top so much more intense. It was the UFC champ who took it into fifth gear in the final moments and seized victory. While it was a good challenge, it was Rousey’s celebratory “double-gun salute” and not-so-kind words after that made this moment so memorable.

On season 6 of TUF, the rival coaching pair of former UFC welterweight champions took to the bowling lanes and, no disrespect, they did not impress. So much so that White agreed to Hughes’ request of doubling the cash prize for the winning team’s fighters from $1500 to $3000 each if Hughes could hit a strike on his next attempt. Never bet with a UFC Hall of Famer because Hughes crushed that strike. Eventually, that extra money would go to Matt Serra’s team as he would go on to win the head-to-head.

They weren’t specific coaches’ challenges per se, but bowling has appeared in a couple of other seasons. On both TUF 17 and TUF China, the fighters were taken to a bowling alley to unwind from the rigors of the show’s competition and, naturally, turned the bowling into its own competition. The former saw coaches Chael Sonnen and Jon Jones bowl against each other, with the loser agreeing to coach the winner’s team for a training session while wearing the winner’s team’s jersey - which Jones did. The latter saw the two teams bowl against the other with a unique punishment for the losing group - walk around holding a bowling ball between one’s knees, which Team Flying Lions did as Team Sky Dragons laughed at them.

Unlike their title scrap at UFC 86, the coaches’ challenge between “Rampage” and Griffin was a one-sided drubbing from the very beginning, but they both had the same victor. Similar to Hughes’ bowling stunt, Jackson had the opportunity to double the winning team’s fighters’ payout if he could sink a three point shot, and the then UFC light heavyweight champ did just that. That was about all the good shooting Rampage had for the day as Griffin cruised his way to a HORSE victory punctuated by a one-handed dunk, which Jackson didn’t even attempt.

For these bitter rival coaches, true satisfaction is throwing leather at the other’s face, but a pretty close second is whipping a rubber ball at the other’s face. Team Liddell and Team Ortiz squared off in a 4 on 4 elimination scenario with the first team to win three games emerging as the victor. Much like his UFC Hall of Fame career, “The Iceman” was throwing heat, pitching dodgeballs with an overhand right. Liddell’s team swept each game, with Ortiz being the last eliminated each time. And nothing could have been sweeter for Liddell as he was the one who hit Ortiz to secure those wins in the final two frames. Afterward, Liddell celebrated in identical fashion to how fans saw The Iceman do it inside the Octagon.

Seriously, get a UFC FIGHT PASS subscription and binge-watch TUF China - it’s brilliant. When Team Flying Lions’ original head coach Hailin Ao had to leave the show for personal reasons, his assistant and replacement head coach An Hu probably didn’t give a second thought to the absurd coaches’ challenge he was now signed up for. Held on what looked like the coldest day of the year on a dock, coaches Tiequan Zhang and Hu got dressed in inflatable sumo costumes (if that wasn’t great enough) and tried to pick up beer bottles with child-size fishing poles and move them from part of the dock to another - whoever moved their lot of beer bottles first won. It was spectacular and it was a fierce race, with Hu beating Zhang by one bottle.

If the TUF house is going to be a log cabin then the coaches’ challenge has to have axes - that’s the rule. Taking a cue from the rustic Canadian surroundings, TUF: Nations’ coaches Patrick Cote and Kyle Noke tested each other’s manliness in a series of lumberjack challenges. First up, the welterweights threw axes at a wood block to see who could get theirs to stick, which “The Predator” won. Second, they shot crossbows at an apple to see who could cleave it in half, which Noke won. Lastly, Cote and Noke raced to saw a giant log in two, which came down to the wire with Cote taking the final win. Honestly, every UFC event in “The Great White North” should begin with the headliners competing in an identical lumberjack challenge.

Doesn’t every little boy dream of messing around with giant construction equipment? The UFC has fulfilled those fantasies for four of their fighters, but in high-pressure, money up for grabs competitions. In TUF 17, then UFC light heavyweight champion Jon Jones and Chael Sonnen had a three-part race piloting enormous excavators - you know, those huge cranes that dig stuff up - that was filled with trash talk and drama. They had to dig and drop mounds of dirt into a dumpster, stack big tires into a pyramid and drop a basketball into the hole of a tire. For TUF Brazil 4, old PRIDE rivals Mauricio Rua and Antonio Rogerio Nogueira dug a tire out of the ground with an excavator, pushed the tire by bulldozer through a zigzag course and raced the bulldozer to the finish line. It was over almost as soon as it started with “Lil’ Nog” dropping his tire a couple times while “Shogun” simply smoked the course.

Calling it TUF “Smashes” made this coaches’ challenge extraordinarily appropriate. First and foremost, the coaches’ challenge was overseen by Brett Bliefnick because he was the Australian Demolition Derby Champion and that kicks ass. Second, Ross Pearson and George Sotiropoulos really did not like each other, so the pair of lightweights were champing at the bit to drive a car into the other as fast and as often as possible until their opponent’s car quit. It was really quite an automobile duel, with both Pearson and Sotiropoulos employing a similar strategy of driving in reverse to hit the other with their car’s rear instead of the front. The smashing went back and forth until Sotiropoulos landed a clean shot to Pearson’s side, but then made the crucial mistake of missing a gear while trying to deliver a follow-up blow. From there, “The Real Deal” capitalized on Sotiropoulos’ momentarily stalled car by repeatedly backing his car into his opponent’s until Sotiropoulos’ radiator cracked and his car was done for good.

Grenade launcher for the win! Yes, TUF Live’s Coaches’ Challenge was sponsored by the U.S. Marine Corps and featured two of the UFC’s best bantamweights, literally, going ballistic. Basically, Urijah Faber and then UFC bantamweight champion Dominick Cruz were to tackle an obstacle course that had target shooting mixed in with the running and the jumping. The coaches climbed a 20-foot vertical rope, shot five targets with an M9 pistol, flipped tractor tires, shot targets 50 and 70 yards away with an M4 rifle, ran while carrying training dummies, shot two targets at 50 yards with an M249 SAW, ran carrying ten cases weighing 35 pounds each of ammo and shot two targets with the aforementioned M32 grenade launcher. Did I mention some of the targets exploded into fireballs when they were hit? So good. The visuals - slow-mo galore - alone were amazing, but the race was wild. Right off the bat, “The Dominator” took a commanding lead through the first few stations, but Cruz stalled hard at the SAW, which allowed Faber to take control. From there, “The California Kid” scored with his second grenade toward overall victory just as Cruz was landing his first.